5 memorable moments from past election debates 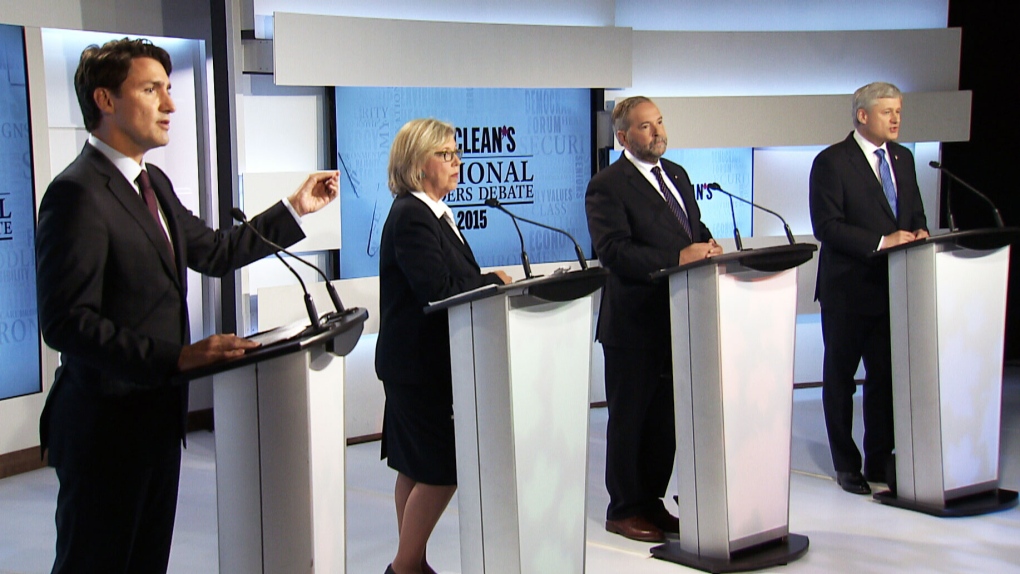 TORONTO -- Federal party leaders are carefully prepared for a televised debate, but they can sometimes be thrown off by other leaders’ arguments or antics on the stage.

These moments can have the power to shift an election, depending on how they’re handled.

During the first debate of the 2015 election campaign, Liberal Leader Justin Trudeau and NDP Leader Thomas Mulcair got into an argument on Quebec separatism that showed Trudeau was not going to be intimidated by a more experienced politician.

Trudeau starts the exchange by firing a dig at Mulcair over the NDP leader’s opposition to the Clarity Act, which requires a “clear majority” for separation from Canada in the event of a referendum.

Mulcair used this as a chance to fire back at Trudeau: “Mr. Trudeau has an obligation, if he wants to talk about this subject, to come clean with Canadians. What’s his number? What is your number, Mr. Trudeau?,” he said, referring to the number of majority votes that would be acceptable for separation.

As Trudeau tried to respond, Mulcair began interrupting him in a condescending tone with: “You’re not answering,” “You haven’t answered,” “What’s the number, Justin?”

A visibly frustrated Trudeau then responds with: "You want a number, Mr. Mulcair? I'll give you a number. My number is nine.”

"Nine Supreme Court justices said one vote is not enough to break up this country. Yet that is Mr. Mulcair's position. He wants to be prime minister of this country and he's choosing to side with the separatist movement in Quebec and not with the Supreme Court of Canada."

The powerful moment seemed to catch the NDP leader off guard and helped spur support for the Liberals. Trudeau eventually won the election with 184 seats and a majority, while NDP lost 51 seats from 2011.

During the 2015 Munk leaders’ debate, Trudeau took a stab at Conservative Leader Stephen Harper over Bill C-24, dubbed the Strengthening Canadian Citizenship Act, which amended the Citizenship Act to allow dual nationals to be stripped of Canadian citizenship if they’re convicted of crimes relating to terrorism, spying or treason.

Trudeau had previously said the bill created a worrisome situation where the prime minister has the ability to revoke the citizenship of a Canadian.

Harper defended the bill during the debate: "Why would we not revoke the citizenship of people convicted of terrorist offences of this country?"

The line has become a sort of mantra for Trudeau during his tenure as prime minister. He used it as recently as July when he was asked about U.S. President Donald Trump’s comments that four Democratic congresswomen of colour should return to where they came from.

NDP Leader Jack Layton dropped a political bomb during the 2011 election debate when he called out Liberal Leader Michael Ignatieff for his lack of attendance in the House of Commons.

Ignatieff seemed taken aback by the comments, as it was the first time his attendance had been a point of discussion throughout the campaign.

Layton then hammered his point home by comparing Ignatieff’s attendance in Parliament to the everyday workforce. “You know most Canadians, if they don’t show up for work, they don’t get a promotion,” he said.

The Liberals suffered a significant blow following the debate, falling to 34 seats and losing its spot as the Official Opposition to the NDP.

Canadian Alliance Leader Stockwell Day attempted to put Liberal Leader Jean Chretien on the spot during the 2000 debate by using a prop to address Liberal attack ads on his party platform.

“It is a clear position: no two-tiered healthcare, and yet you, sir, have taken out an ad saying that we are not telling the truth,” Day said. While he spoke, Day unveiled a hand-written sign that read: “No 2-tier healthcare,” in a move that broke debate rules.

Day then pushed Chretien for a response. “I want to ask, would you do one of two things: either right now, sir, would you call me a liar please, or would you pull those ads that are wrong?”

Chretien appeared unfazed by the move and simply shrugged.

Chretien’s Liberals ultimately won that election by capturing a majority with 172 seats, while the Alliance won was able to maintain its status as the Official Opposition with 66 seats.

When Liberal John Turner took over from the retiring Pierre Trudeau as prime minister in 1984, he had been required to sign off on Trudeau’s appointment of several loyal party members to the Senate, which many people saw as blatantly partisan.

Turner called an election 10 days after taking office and these controversial appointments became a hot-button issue throughout the campaign.

During the debate, Progressive Conservative Leader Brian Mulroney opted to exploit these appointments.

“You, sir, owe the Canadian people a deep apology for having indulged in that kind of practice with those kinds of appointments,” Mulroney said.

Turner defended himself by saying he had “no option” but to approve the appointments, though the argument was not convincing.

Turner’s Liberals suffered a crushing defeat in the 1984 election, falling from a majority government to just 40 seats in the House of Commons.

With files from Josh K. Elliott