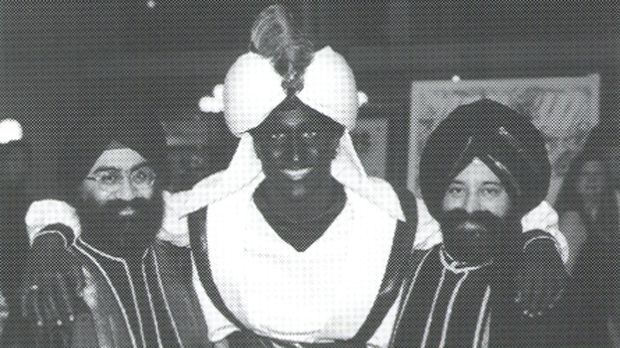 OTTAWA -- In the 2015 federal election, a photograph of a dead child on a beach in Turkey forced the global refugee crisis onto the campaign agenda.

Now, say advocates, the images of the prime minister wearing blackface must spur a national debate about the realities of racism in this country and what must be done to tackle it.

It's been a week since two photos and a video of Justin Trudeau wearing black- and brownface at events years ago shocked the country.

But they came a week into a federal campaign that began with numerous allegations of racist behaviour on the part of candidates. Now, elections signs are getting defaced almost daily with swastikas and hateful slogans.

"This is my sixth campaign and we have seen our signs defaced, but nothing like this," said Edmonton Liberal Amarjeet Sohi this week after an NDP candidate's signs in Calgary were defaced with the words "Go back MF."

The candidate, Gurinder Singh Gill, is pictured on his signs, bearded and wearing a turban.

"Regardless of political stripes, we must stand together and call this behaviour out," Sohi said.

The age-old myth of Canada not being racist, or at least "not as bad" as the U.S., is being shattered for good, said Sidrah Ahmad-Chan, co-founder of the Rivers of Hope Project, which addresses Islamophobic violence.

"That story, and reality, are really colliding in very obvious ways: how can we tell ourselves that story if signs are being defaced with swastikas or the prime minister shows up in brownface and blackface?" she said.

In 2015, that photo pushed Canadians to demand their country do something about the Syrian refugee crisis.

In the midst of that election campaign, thousands of Syrians a day were taking treacherous routes over land and water to flee the civil war in their country.

Among them, the Kurdi family who had fled to Turkey, and were trying to get to Europe. Alan Kurdi, three years old, drowned. A photo of his lifeless body on a beach circulated around the world, and when it emerged the Kurdi family had sought to come to Canada, refugee issues suddenly became a flash point, forcing all parties to confront their records and pledges.

In Canada, however, many of the racist situations being faced by minority groups simply cannot be summed up by a photo, Ahmad-Chan said, citing the treatment of people seeking asylum at the border and the situations facing Indigenous Canadians as examples.

"But it's reached a crisis point: because we haven't had a deeper discussion of issues that aren't as flashy as a photo, it's almost like people aren't prepared for it."

The fear is that the discussion is being reduced to a narrow debate about whether Trudeau's actions were or weren't racist (he says they were), or if a candidate's statements are or aren't, said Syed Hussan, a member of the Migrant Rights Network, a group formed over a year ago to find ways to speak up against racist narratives infiltrating the campaign.

Those personally affected by seeing the photos of Trudeau are also people whose races are keeping them from access to clean drinking water, or secure housing, or have them living in fear of being deported or detained, he said.

Those realities -- and the policies that lead to them -- must be the central focus, he said. The divide-and-conquer approach of politicians fails in that regard, he said.

"We all have been given separate boxes and different political parties pretend to speak to that voice," he said.