Baloney Meter: Andrew Scheer says the carbon tax 'has been proven to fail' 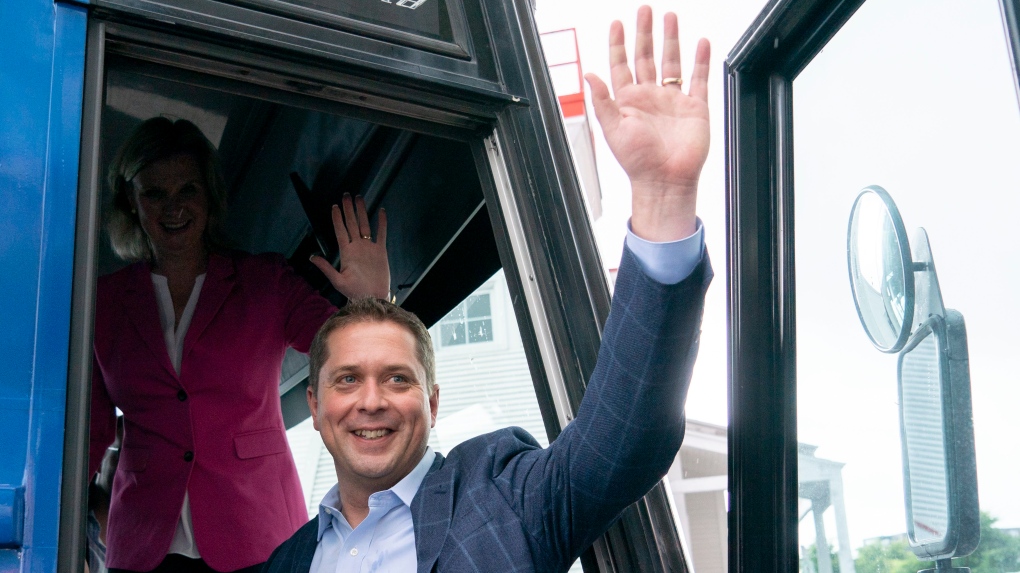 Conservative leader Andrew Scheer waves to the crowd as he and his wife Jill board the campaign bus following a campaign rally in Trois-Rivieres, Que. on Wednesday, September 11, 2019. THE CANADIAN PRESS/Paul Chiasson

OTTAWA -- "Under Justin Trudeau, we are falling further behind and I do not understand why he is still going all-in on a carbon tax that has been proven to fail."

After the Liberals promised to toughen their greenhouse-gas reduction targets to reach net-zero emissions by 2050, Conservative Leader Andrew Scheer was asked whether he would match the proposal.

The Conservatives, he said, would stick to the current target of reducing greenhouse-gas emissions by 30 per cent below 2005 levels by 2030, through a proposed plan for the environment that would scrap the current federal carbon-pricing regime.

The Liberal plan includes a price on carbon-dioxide emissions of $20 per tonne, which the federal government imposes on New Brunswick, Ontario, Manitoba and Saskatchewan because those provinces did not have carbon-pricing systems of their own. It's to expand to cover Alberta in the new year and the price is to rise to $50 per tonne in 2022.

Individuals get rebates through the tax system, meant to equal the average household's carbon-tax payments. People whose lifestyles produce fewer emissions come out ahead.

Economists have long argued that carbon taxes are efficient ways of reducing greenhouse-gas emissions over time, because they use a market mechanism to help shift the behaviour of consumers and corporations away from burning fossil fuels that produce carbon dioxide without favouring one way of reducing emissions over any other.

Given the federal carbon tax only came into effect April 1, a reporter asked Scheer what proof he could provide of its failure.

"We can point to British Columbia, which has had a carbon tax for a long period of time and whose emissions went up last year," said Scheer.

The B.C. carbon tax came into effect in 2008 and yes, data released earlier this month show that total greenhouse-gas emissions in the province reached 64.5 million tonnes in 2017, an increase of 1.2 per cent over the year before.

That same data, the Conservatives noted, also showed that total emissions had declined by only about 0.5 per cent since 2007, which is the baseline year the province uses to measure the reductions.

Dan Woynillowicz, policy director at Clean Energy Canada, said B.C. has been experiencing growth in population and the economy that has led to an increase in emissions, which he said would have been much greater if the carbon tax had not been in place.

The province also did not increase the carbon tax between 2012 and 2017, before the new government of NDP Premier John Horgan committed to increasing it by $5 per tonne annually beginning in April 2018, which Woynillowicz said should help to put reductions back on track.

"A good chunk of that was a period of stasis, where policies were not doing what they needed to be doing," he said.

Other research, Woynillowicz said, shows the carbon tax in B.C. has affected behaviour in ways that would reduce emissions.

That has included declines in the consumption of gasoline, diesel and residential natural gas, as well as consumers buying more fuel-efficient vehicles.

"All of those independent analyses have found that having the carbon tax made a difference," he said.

Scheer also said that emissions are still rising at the national level.

"We can point to the fact that although it is relatively new, the carbon tax has still been in place for some time now and emissions are going to go up," Scheer said Tuesday. "The projections by independent analysis are that they will continue to go up and so that is the basis of my statement."

The Conservatives shared several sources of data and information to support this claim, including a June report from the parliamentary budget officer.

That report estimated Canada would be able to reduce its emissions to 592 million tonnes by 2030 under its current environmental policies, which include the carbon tax. That would leave Canada 79 million tonnes short of what it agreed to at the 2015 United Nations climate conference in Paris.

To make up the gap, the PBO estimated Ottawa would need to impose an additional levy that would bring the total carbon tax to $102 per tonne by 2022 -- $52 more than currently planned -- that would mean an additional cost of 23 cents for a litre of gasoline.

The analysis assumed, however, that raising the price on carbon would be the only thing the federal government would do.

"That basically said if you froze all policies as they are today and you were going to just use increases in the carbon price to achieve the 2030 target, what would you need to do with that price?" Woynillowicz said, adding that is not what Trudeau, or anyone else, has proposed.

Jean-Thomas Bernard, an economist at the University of Ottawa who has studied the impact of the B.C. carbon tax on the consumption of diesel, said it is true that a carbon tax needs to rise over time, and probably quite significantly, to remain effective.

Still, Bernard said, that does not mean it was correct for Scheer to say the carbon tax itself has failed.

"All the studies found these effects are not large enough ... but the effects are on the right side of what we are looking at," said Bernard, whose study on diesel concluded the carbon tax would need to rise to $262 per tonne to meet Canada's Paris target.

There are legitimate questions to ask about how the Liberals could reach their existing goal, or the new one revealed Tuesday, without increasing the carbon tax. That is different from saying, as Scheer did, the carbon tax has already proven unsuccessful.

For that reason, his statement earns a rating of "a lot of baloney" -- the statement is mostly inaccurate but contains elements of truth.

This report by The Canadian Press was first published Sept. 25, 2019