Battle for the left: May says Singh needs to 'show up' 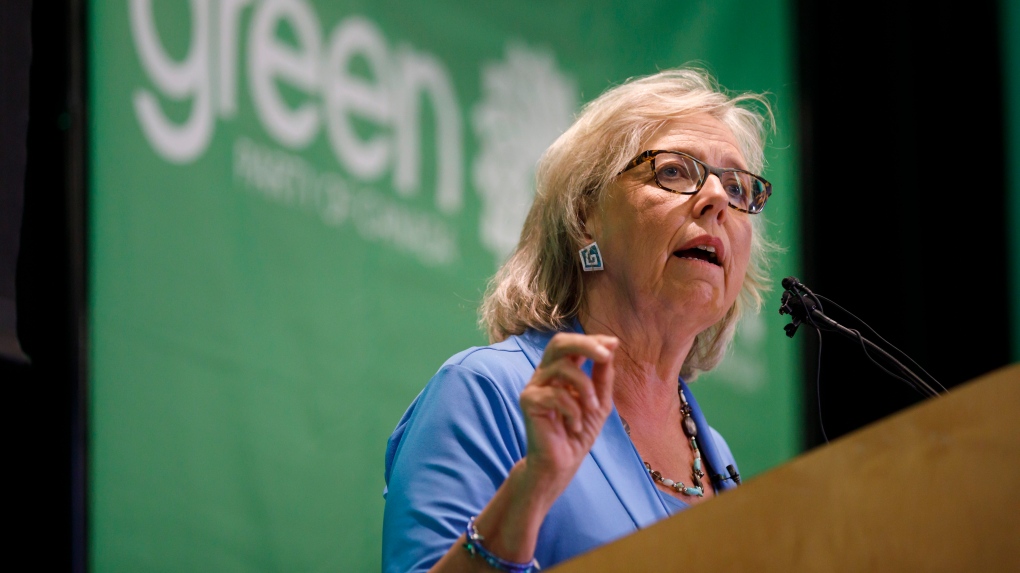 Green Party of Canada leader Elizabeth May speaks in Toronto prior to a fireside chat about the climate, Tuesday, Sept. 3, 2019. THE CANADIAN PRESS/Cole Burston

OTTAWA – Fresh off a week of fierce accusations between the federal Greens and New Democrats, Green Party Leader Elizabeth May isn't backing down from the fight for progressive voters, offering some unsolicited advice to her opponent: "show up."

In the first of a series of leaders' interviews on CTV’s Question Period, May spoke about the ongoing feud between the NDP and Greens, offered new details on what her support would be contingent on in a minority scenario, and gave her timeline for a balanced budget should the Greens manage to win enough seats to govern.

Generally known for seeing eye-to-eye on key progressive issues, May and Singh spent the better part of this past week exchanging barbs over a series of defections in New Brunswick from the NDP to the Greens, with Singh accusing May of spreading misinformation and May accusing the NDP of strong-arming these support-switchers into recanting. After an apparent initial exodus of 14 former provincial NDP candidates led by a federal campaign executive, five have since said that they were added to the list of defectors without their clear understanding or approval.

"The problem they have is that Jagmeet Singh let down their members in New Brunswick by never visiting. It's been two years he’s been leader, in that time I've been there three times… First rule of leadership is you have to show up," May said.

"I'm really astonished by this trumped-up anger that we're seeing from the NDP. I wish we could talk about things we have in common instead of creating this really rather pointless diversion."

Increasingly the Green Party's electoral prospects are improving, pulling in more votes in provincial races and electing the Greens' second MP to the Commons in the final byelection of this Parliament.

Asked if she thinks some of the focus on the Greens from the NDP was because of her party's rising prospects, she said that was "probably the answer," and that it was "a little disappointing."

"We should be working together, we should be talking about the climate crisis. I hope that after the election, we can put all this behind us," May said.

Asked if she thinks it's possible the Greens will win enough seats – 12 -- to be able to hit official party status in the House of Commons, she said she "hopes to do better than that."

Regions the Greens are eyeing are Vancouver Island, where she thinks they could sweep all seven seats, the Lower Mainland of B.C., New Brunswick, and Quebec.

If May holds balance of power, TMX dead

May continues to assert that should the fall federal election conclude in a minority government scenario, and the Green Party is in a positon to assist the party with the most seats, it will only do so if that party has a serious plan to reduce greenhouse gas emissions. None have yet to propose a serious enough plan, she says and so would be willing to defeat a government and send Canadians back to the polls.

In the interview airing on Sunday, May said that one of the conditions that would have to be met in order to meet the Green's criteria for a serious climate plan would be cancelling the Trans Mountain pipeline expansion. She said cancelling it was "obviously required if you're serious about fighting climate change, but not by itself, not close."

Still committed to balancing the budget?

May said that her party's budget numbers are still being reviewed by the Parliamentary Budget Officer but she is still committed to reaching a balanced budget… though it likely won’t be in the first mandate.

She said that the party is currently looking at a five year period, and would create new revenue streams to get there, including by going after hidden offshore wealth, targeting stock option loopholes, and going after large multi-national corporations like Amazon and Facebook.

"We've crunched the numbers and we have enough revenue to deliver on universal pharmacare, to deliver on abolishing tuition and investing heavily in post-secondary education, colleges, universities, trade schools. We can actually deliver on making things more affordable for the average Canadian family, making life much better for our young people who are dealing with crushing student debt and we can do it at within a framework where we say 'this is where we find the money, this is how we pay for it,'" May said.