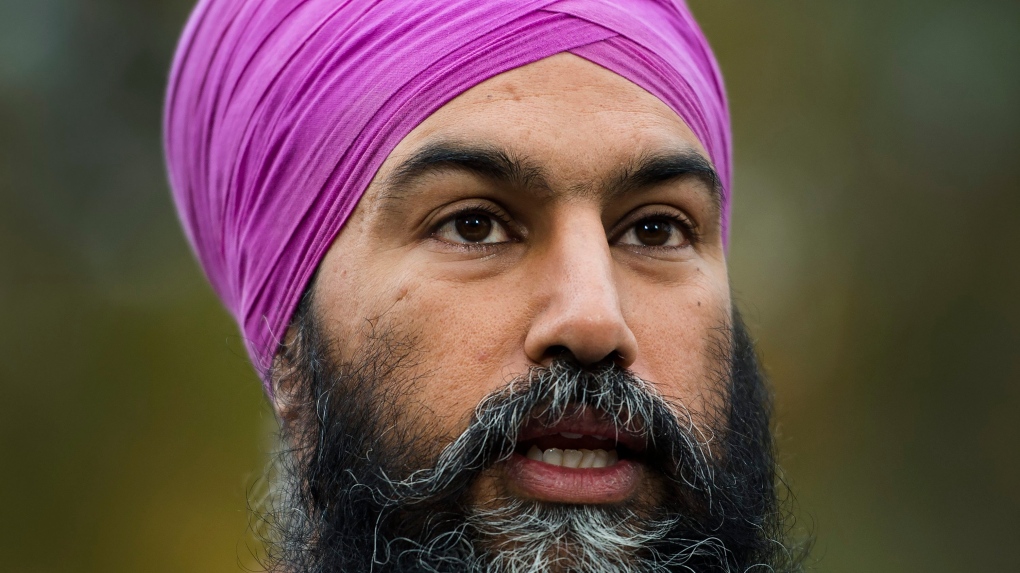 NDP leader Jagmeet Singh speaks to the media at Jack Layton Park during a campaign stop in Hudson, Que., on Wednesday, October 16, 2019. THE CANADIAN PRESS/Nathan Denette

HUDSON, Que. -- Before the election campaign began, Jagmeet Singh turned a national spotlight onto his turban, a move aimed at facing head-on the unavoidable fact he is different from other federal political leaders.

The NDP leader appeared in a Quebec-targeted, French-language advertisement, with his hair down around his shoulders, a rare image of him not wearing one of his signature brightly coloured Sikh wraps.

Fast-forward to this, the final week of the campaign, and Singh says he believes Quebecers have learned to look past his ethnicity and religion and are instead connecting with his message about his values and how they align with those of voters in the province.

"I certainly believe things have changed throughout the campaign," Singh said Wednesday.

"I've seen the change. Quebecers are saying, 'You know what? This is a guy who sounds just like us, he talks like us -- his French isn't that bad -- and more importantly, he's got the same values."'

The New Democratic Party began the election facing an uphill battle, with fewer resources than its two main political rivals, an exodus of respected MPs and concerns about Singh's inability to build more public support before the campaign kicked off.

Since the campaign began on Sept. 11, polls suggest Singh has turned the party's fortunes around, thanks in part to strong performances in the leaders' debates.

However, this boost does not appear to be having the same effect in Quebec. The unexpected resurgence of the Bloc Quebecois is threatening gains the NDP hoped to make in the province.

At this point, the NDP could have trouble just holding on to the 14 seats it had when the election was called, as polling data suggests the party is in fourth place in Quebec.

A key issue that has been particularly sensitive for the NDP leader in Quebec has been the province's secularism law, known as Bill 21.

That bill bans public servants in positions of authority from wearing religious symbols or garments at work. It would include Singh if he ever wanted to work in the province as a teacher, for instance, because he wears a turban and a kirpan as symbols of his Sikh faith.

The bill is popular in Quebec and raised questions about its influence on how Quebec voters would see Singh, particularly after a man in Montreal suggested the NDP leader get rid of the turban to look more Canadian.

But Singh says he believes there is a spirit of openness that can be overlooked in Quebec because of the focus on the controversial law.

He recalled a recent campaign event on the streets of Montreal where he received many compliments on the pink colour of his turban that day.

"I've always received an incredible experience every time I've come to Quebec ... but I certainly believe things have changed," he said.

"I think as I've been able to talk about my values, it's gone beyond just the appearances and people are like, 'You know what? He actually does share our values,' and I'm proud of that because campaigns should matter and it does matter and I've seen the change."

The NDP leader spent Wednesday making one last pitch to Quebec voters, trying to woo as many of them as possible ahead of election day by spending time in the area where former party leader Jack Layton was raised -- Hudson, Que., at the very east end of the Ottawa River just west of Montreal.

Layton led the party in the 2011 election to a 103-seat breakthrough, the majority of which were delivered in Quebec as the so-called orange wave swept through the province.

Singh asked voters to remember how Layton appealed to progressive voters in Quebec to come together under the NDP banner under a spirit of hope.

Layton's widow and former NDP MP Olivia Chow also talked about her husband's legacy in the province -- but tied his efforts against racism and discrimination to a new legacy she believes Singh is building for the party.

Chow told a story about Layton's early days at the Hudson Yacht Club, which excluded French kids from joining in the 1960s. As a junior commodore of the club while a teen, Layton discovered a rule saying he could invite a friend to join the club.

"I can just imagine young Jack at that age, already with the instinct to lift people up to fight injustice and discrimination."

She then touched on the fact Singh faced bullying and racism as a youth, but turned the experience into the same determination to fight injustice with compassion as that of her late husband.

"The legacy of Jack Layton is being carried out by our wonderful, courageous, compassionate leader, my good friend, Jagmeet Singh," Chow said.

Singh took a moment to compose himself before taking reporters' questions.

But there were no tears at an unscheduled stop at Layton's old high school, Westwood Senior High. There, the NDP leader was given rock-star treatment by students who crowded around him and posed with him for Instagram photos.

None of the students looked twice at his turban.

This report by The Canadian Press was first published on Oct. 16, 2019.