Can the Liberals count on the youth vote again? 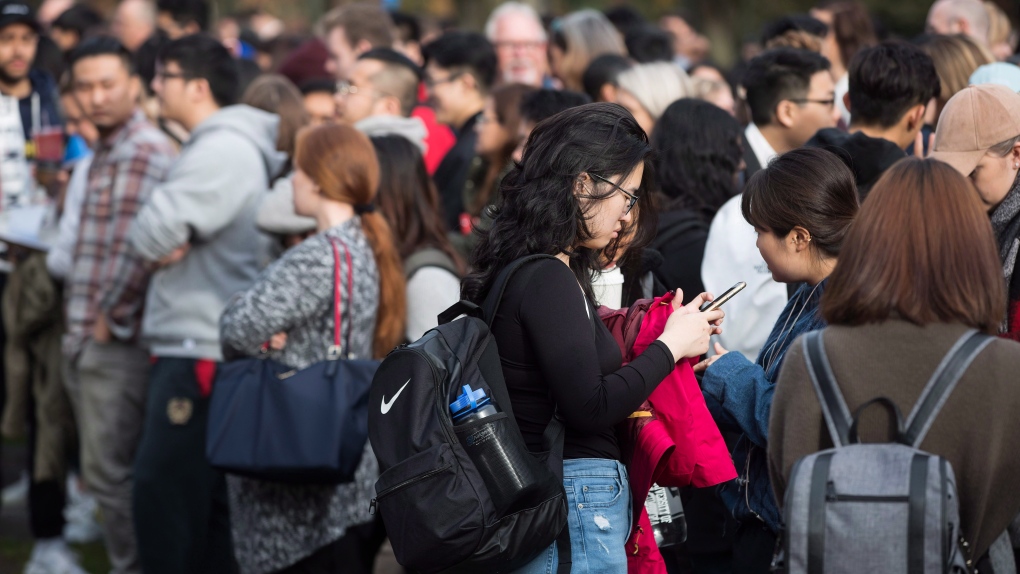 A woman uses her phone as students stand outside after a fire alarm forced the evacuation of a building at the University of British Columbia, in Vancouver, on Friday October 26, 2018. THE CANADIAN PRESS/Darryl Dyck

OTTAWA - Young Canadians, many of whom were first-time voters, came out in droves for the 2015 election.

According to Elections Canada data, voter turnout increased significantly among those aged 18 to 24, from 38.8 per cent in 2011 to 57.1 per cent.

Many of them put their support behind a new, equally spry face – Justin Trudeau.

"It was a change election; people were looking for a change," says David Coletto, CEO of Abacus Data. "Justin Trudeau was dynamic, young, and different, something that appealed to young people in terms of both his message and the way he delivered his message."

Four years later, the jury’s out on whether Trudeau – now the oldest of the three major national party leaders – can secure the same level of support among this demographic a second time.

But we’ve seen this story play out before. In 1968, Trudeau’s father, former Prime Minister Pierre Trudeau, inspired a flock of baby boomers to mark an ‘x’ beside his name on the ballot.

He was provocative and unconventional, as Gord McIntosh, a former journalist with The Canadian Press, recounts to CTVNews.ca.

"Just after he was elected as an MP, he wore sandals and an ascot into the House of Commons and the Tories went nuts."

In the next go-around in 1972, the Liberals barely snuck by to form a minority government. Trudeau's support had faded, which is in part the fate of any incumbent party, but it carries more weight when expectations at the outset are higher than usual.

As Coletto notes, excitement takes a plunge when reality hits that no leader – no matter how authentic they may seem – can surpass political gamesmanship.

He says there are a number of examples Justin Trudeau’s 2015 supporters can point to that might prompt the question "is he any different from prime ministers past?"

"Whether it’s more recent like the SNC controversy, or for some who believe intensely that we have to deal with climate change, buying a pipeline seems counter to that and for others the promise of electoral reform and then backing out of that."

Yet, despite political setbacks over the past several years and how millennials might perceive those setbacks, the Liberals remain the only major party with a ratified youth wing, as Young Liberals of Canada President David Hickey notes.

"It shows the value in which other parties place in young people and in their opinion," said Hickey. "What we’re seeing now is consistent and growing numbers as people get back to school and into election mode."

But where will those young people who haven’t been recruited by the Liberal brand find a home?

"Jagmeet Singh has an opportunity, he’s unique, he can be exciting, and he’s different than anything we’ve seen."

Joshua Werber is a student at McGill University and co-president of the campus NDP club. Formerly a Green supporter, Werber started attending NDP gatherings at school and realized his values were more closely aligned with the New Democrats.

"The environment – while in my opinion is the most important issue of my generation – can’t be separated from workers’ rights or LGTBQ rights."

As for Singh, Werber says when he walks into a room; young people are instantly drawn to him.

"He’s got that level of Trudeau energy, four years after Justin Trudeau is being revealed to be less of a progressive champion than people thought he was."

Coletto notes that the impact of the youth vote, while significant for any party to consider isn’t as much of a signifier of success or failure for the Conservatives.

"[The Conservatives] can always count on about 20 to 30 per cent of young voters, depending on the election, but they don’t need them in the same way those more progressive political parties, particularly the Liberals, need young people to vote for them."

After video was released last month showing Conservative Leader Andrew Scheer speaking out against same-sex marriage in the House of Commons in 2005, many in the political sphere saw the Conservatives hopes of luring more young voters dwindle.

Perception or reality, the majority of millennials don’t have time for intolerance on social issues, said Coletto.

But there are of course exceptions to this, namely the young Conservative supporters who have put their faith behind the party and respect their leader’s remarks as his own.

Olivia Friesen is one of those supporters.

"When I see that, I see that as his individual view," said the University of Fraser Valley student. "The thing that I was most surprised by is this is a very big tent party. It’s a party that houses so many people who are pro-choice and who have so much love and support for the LGBTQ community but they vote conservative."

Friesen added that her fellow youth colleagues see a shred of “hypocrisy” in the Liberal Party when candidates are expected to vote a certain way. She’s alluding to Trudeau’s past comments that candidates running for the Liberal Party must defend and respect same-sex marriage law and a woman’s right to choose.

"For me, I think ‘oh you’re a party of tolerance, and yet all these different views that could be in your party you’re saying no, no you can’t have any other view but this one.’"

She said her top priority when identifying the calculus on her vote is fiscal responsibility.

"That’s something I saw much more so displayed in the Conservative Party, living with our means."

Last week, the Canadian Alliance for Student Associations (CASA) launched their Get Out The Vote campaign to encourage young people to get informed on key issues in the federal election campaign and head to the polls on October 21st.

CASA chair Adam Brown, who is also a vice-president at the University of Alberta Students’ Union, told CTVNews.ca that they’re expecting to double their student pledge from 42,000 in 2015 and expand their collaboration with student associations.

"We have 36 student associations taking part," said Brown. "The target that we have now is to at least double it – so between 80 to 100,000 pledges this time around."

He thinks the surge in young voters is one symptom of a larger trend. Not only are young people more politically motivated, but they have better access to designated voting stations.

"For a lot of students that are in campus, in the past it used to be so much harder for them to vote," he said. "This time around students are going to be able to vote in advance polls on their campuses for their home ridings."

Increasing the number of on-campus polls was part of an Elections Canada pilot project last federal election. There are now 115 post-secondary institutions participating.

This spring, Abacus and CASA released a report showcasing the top five issues of concern surveyed among Canadian students aged 18 to 25. Among them: Creating good job opportunities for young Canadians; making college and university more affordable; and dealing with climate change and the environment.

Those between the ages of 18 and 34 will make up the largest segment of the voting population in 2019, at over a quarter of the electorate.

To that end, you can expect political parties to spend the next five and a half weeks trying to persuade this vast voting bloc to get behind their party banner.