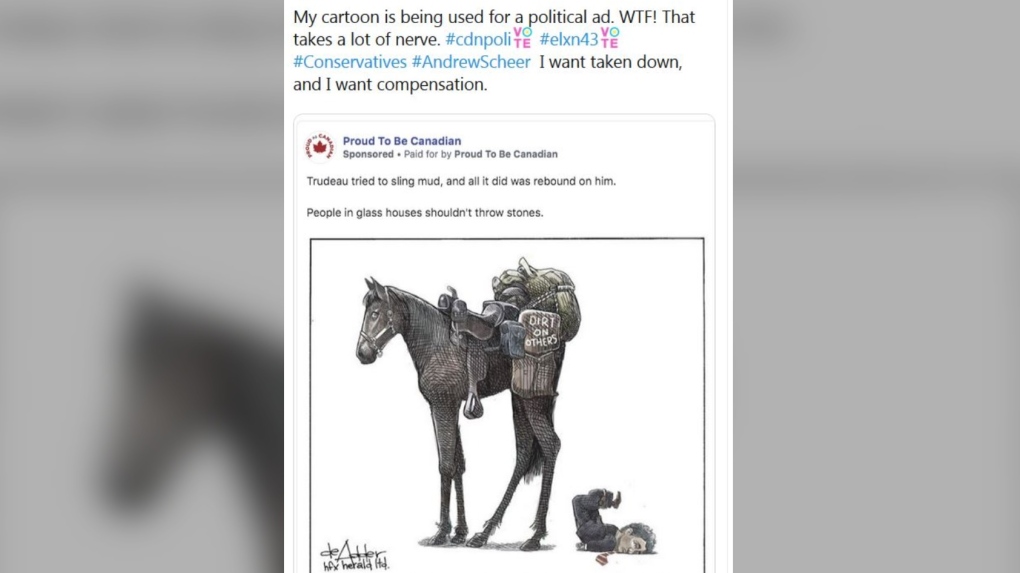 Cartoonist Michael de Adder called out a third-party political group for using his cartoon in an online advertisement ‘completely without my permission.’ (Michael de Adder)

TORONTO -- Cartoonist Michael de Adder called out third-party political group Canada Strong and Proud for using his cartoon in an online advertisement without his permission.

In a tweet, he wrote “my cartoon is being used for a political ad. WTF! That takes a lot of nerve.” He added “I want (it) taken down, and I want compensation.”

The cartoon, which originally ran in The Chronicle Herald in September, appears to show up in the third-party group’s Facebook ad. It features Liberal Leader Justin Trudeau falling off a horse with carrying satchels that read: “Dirt on others.”

The freelance political cartoonist told CTVNews.ca in a phone interview that the group had taken his cartoon “completely without my permission.”

“I don’t mind Canadians sharing it -- and I actually don’t mind MPs sharing them -- it’s a little different in an election though,” he said, explaining it’s an issue “when it’s a paid advertisement or second-party use of my work.”

De Adder’s cartoon appears to be featured on a sponsored post from the Facebook page “Proud To be Canadian.” The page’s “About” section describes how it’s run by the political group, Canada Strong and Proud.

In July, Canada Strong and Proud -- which has been linked to a series of robocalls and text campaigns in Canada -- officially registered as a third party. It’s one of 26 groups spending money on ads or political activity this election season.

Although, in de Adder’s tweet, he tagged the Conservatives and leader Andrew Scheer, Canada Strong and Proud and its Facebook page aren’t affiliated with Scheer’s party.

De Adder said Canada Strong and Proud contacted him and apologized, adding “they seemed very contrite.” He said they both agreed to speak again next week to figure out how they’d ultimately resolve the issue -- not excluding potential compensation.

“I can’t think of anything worse than a second-party political group using an editorial cartoon without permission in a paid advertisement,” de Adder said. “That’s clearly a huge violation … this is way past the line”

In an emailed statement to CTVNews.ca, Canada Strong and Proud said “we were not aware of it until you contacted us” and confirmed they’d been in touch with de Adder on Friday. “We will resolve this with him.”

The group didn’t answer whether it would be offering compensation or how the ad was put up without management's knowledge.

Canada Strong and Proud explained that the Facebook post -- which the group paid to boost its reach -- “ran for less than four days.”

The cartoonist, whose work also appears in The Hill Times and The Toronto Star, said it was the first time seeing his cartoon used for an ad without his permission in a Canadian election.

De Adder made headlines earlier this year when he lost his job with several New Brunswick newspapers, after his illustration of U.S. President Donald Trump playing golf over the bodies of two drowned migrants went viral.

My cartoon is being used for a political ad. WTF! That takes a lot of nerve. #cdnpoli #elxn43 #Conservatives #AndrewScheer I want taken down, and I want compensation. pic.twitter.com/eEZLXnHc92