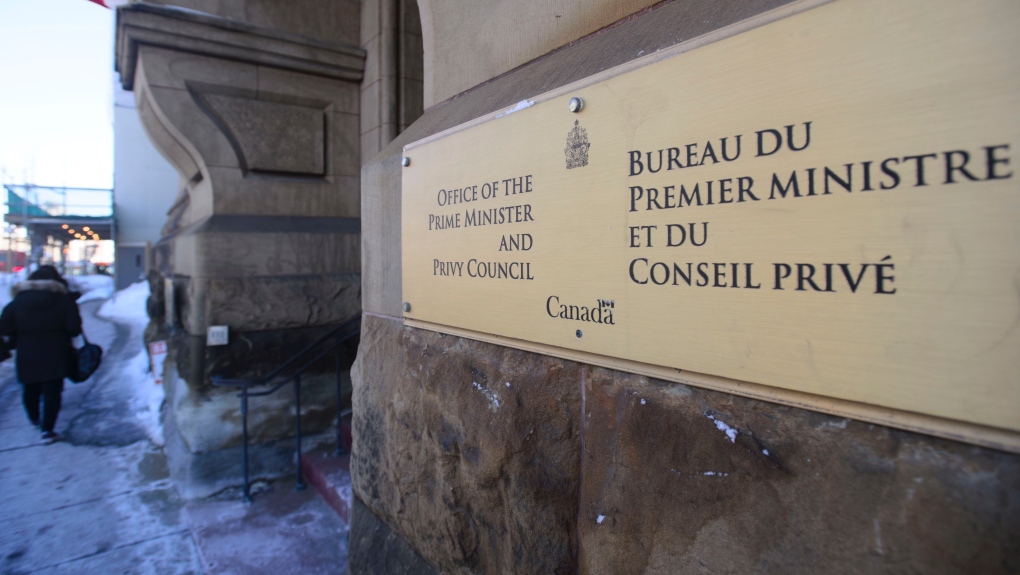 The main door to the Office of the Prime Minister and Privy Council office is seen in Ottawa, Monday, Feb.18, 2019. (THE CANADIAN PRESS/Adrian Wyld)

OTTAWA -- The country's top civil servant has sent a stern warning to government workers as part of his election-campaign guidelines, reminding them to be extra careful about what they say on social media.

The "caretaker convention" rules are circulated internally at the start of every federal election campaign and this is the second time the Privy Council Office has posted the document online for public consumption.

The guidelines set out the rules federal civil servants need to follow to avoid any hint of partisanship in a politically charged election campaign.

While civil servants aren't banned from spending their private time helping any candidate or party, the guidelines say, they should make sure any political activity doesn't "impair or could be perceived as impairing" their ability to work impartially for any party that forms government -- including an ill-advised tweet, Instagram or Facebook post.

"Employees should consider the nature of their current public-service duties, the level and visibility of their position, the nature of the political activity and their personal visibility," the guidelines say as part of a new addition to the document.

"Particular attention should be paid to potentially highly visible public activities, notably the use of personal social media accounts."

The largest union representing federal workers says its members should be able to take political action during a campaign without fear of repercussions.

"They have the same political rights as ordinary Canadians -- whether that's sharing their political views on social media, volunteering for a campaign, writing a letter to the editor or even attending a rally -- as long as it's on their own time and they clearly state their opinions are their own," said Chris Aylward, national president of the Public Service Alliance of Canada.

A spokesman for the Privy Council Office, the central bureaucracy that aids the prime minister and cabinet, said public servants have the right to engage in political activity "so long as it does not impair, or is not perceived as impairing, the ability to perform their duties in a politically impartial manner," but that the warning was added this year "given the role of social media during an election campaign."

Officials had a reminder of that last week when a federal Twitter account tweeted, then deleted, a post about anti-racism strategy spending in the hours after images emerged of Liberal Leader Justin Trudeau in blackface when he was a young man.

Most government promotion comes to a grinding halt during an election period, lest it be seen as promoting the party seeking re-election.

The Privy Council Office said the tweet last Thursday stemmed from a correction Canadian Heritage made to an online version of a news release. The news release was originally sent on Sept. 6 before the campaign kicked off, and noted a funding pledge of about $3.5 million when the correct amount was $3.25 million.

The correction created a revised tweet, "making it appear as though this was a new funding announcement, which it was not," PCO spokesman Stephane Shank said Friday. So PCO asked the department to delete the tweet "given the possible perception" of new spending commitments.

Governments are expected to act with restraint until after election day and MPs convene in Ottawa again, because even if the government appears to have been re-elected, it can't assume it will have the confidence of the House of Commons while there is no elected chamber to say so.

The prime minister and cabinet retain their positions to do routine business and respond to emergencies, although any major decisions are usually done in consultation with opposition parties -- an issue Ian Shugart, clerk of the Privy Council, spells out in the 2019 "caretaker" guidelines.

While most of the 2019 guidelines mirror the 2015 document, there are some additions aside from the warning about social-media use.

Departments are told they can implement regulations approved before Parliament's dissolution, but should be more "reactive as opposed to proactive" when it comes to communicating with affected groups or organizations.

Regulatory initiatives that are "high-profile or controversial" should be avoided as much as possible, this year's guidelines say.

There is also a section on what happens if there is any attempt by foreign actors to manipulate the results of the Oct. 21 vote. A panel of top civil servants have been tasked with alerting the public should such a situation arise.

This story by The Canadian Press was first published on Sept. 23, 2019.