Following the leaders: Where they've been during the first half of the campaign 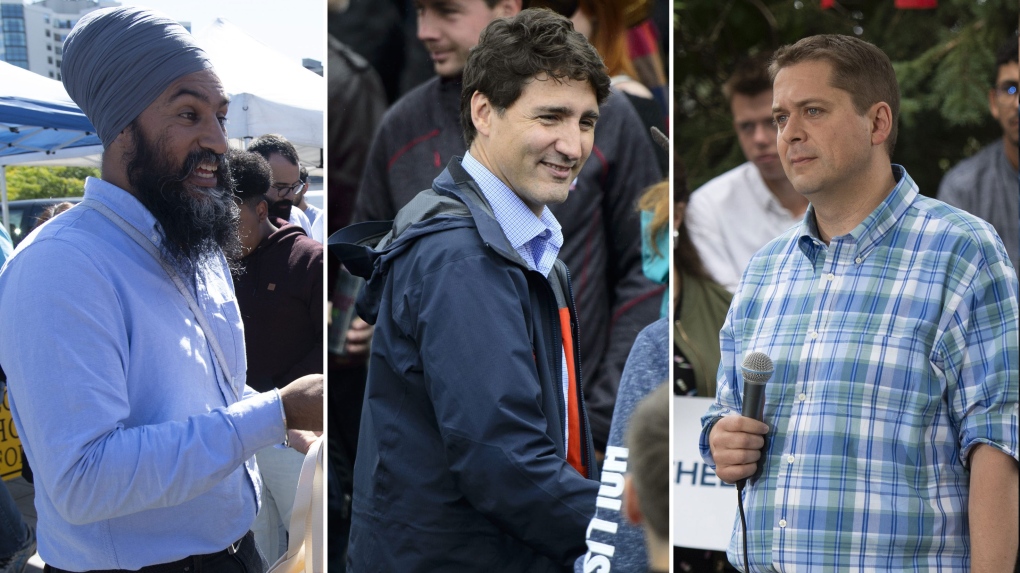 OTTAWA – Now that the 2019 federal election campaign has hit its half-way point, and each of the federal party leaders have been taking their national campaign tours across the country, CTVNews.ca dug into exactly which regions are getting the most attention from the main three contenders for Canada's next prime minister.

You've likely had one of the 1,014 nominated candidates that are running for one of the main three federal parties visit your doorstep, but have you crossed paths with a party leader since the election was called on Sept. 11?

According to CTVNews.ca's analysis of the around 130 cities or towns where the main three leaders' campaigns have stopped in the first 20 days, the odds of running into a leader have been the best if you live in Ontario, Quebec, or British Columbia.

Those three provinces—which are home to a combined 241 of the 338 seats up for grabs— were the three most visited provinces for Liberal Leader Justin Trudeau, Conservative Leader Andrew Scheer, and NDP Leader Jagmeet Singh.

In 20 days, Trudeau had 19 campaign stops in Ontario, has been in six different Quebec locales, and has spent the third most time in British Columbia. Trudeau's campaign approach appears to be a mix of fighting to hold certain regions, while looking to pick up seats to offset what polls are predicting will be seat losses in other places.

Scheer has made 21 stops in Ontario, a few in repeat cities like Toronto and Brampton, made nine stops in Quebec, and six in British Columbia. Appearing confident in the Prairies, Scheer is focusing on regions where the races may be tighter, generally in places currently held by Liberals but where voters may be ready to plant a different coloured lawn sign after the last four years.

Singh has campaigned the most in Ontario, followed closely behind British Columbia, where he's spent several days in a row now. After that the only other province he's made repeat visits to, is Quebec. Singh has yet to step foot in Newfoundland, Prince Edward Island, Alberta, or Saskatchewan. With a smaller campaign budget than the other two, it's understandable why the NDP may stick to certain areas for longer, but they are also the regions where voters have historically been most likely to elect New Democrats.

Trudeau and Scheer have visited every province, some for just one event, but neither have made it to the territories, nor has Singh. This isn't particularly surprising when you consider that heading north would take a considerable amount of time, for just three ridings, and both Trudeau and Scheer made trips up over the summer.

You've likely heard each of these three provinces referred to as a "battleground," or "vote rich" and for good reason. They rank as the top three provinces with the most seats.

Next in line is Alberta, which is currently largely a Conservative stronghold that Trudeau was the first to visit but has not been back, while Scheer has swung through twice. Singh's yet to visit. Then it’s Saskatchewan and Manitoba, with 14 seats apiece. All three have been to Winnipeg, and Trudeau and Scheer have stopped in Saskatoon.

As for Atlantic Canada, where the Liberals swept all 32 seats in 2015, but now the Conservatives are looking to make gains, both Trudeau and Scheer have made a handful of campaign appearances.

Of course, not every riding will have their federal leader pass through town over the course of this campaign, for better or worse. While a leader's presence may bring positive political fortunes, one leader will likely be soon followed by another potentially counteracting that momentum, especially in hotly contested ridings.

Further, for those that do have their guy—in the case of the main three—come to town, they may only be there for the span of a photo opportunity or brief pit stop of the party bus.

If you want to read up more on certain areas, or types of ridings, you should check out the series of riding profiles we've published.

And, if you're curious to dig further into what each leader has been promising while making these stops, check out our interactive platform tool.