Four party leaders churn out the 'baloney' at French-language debate 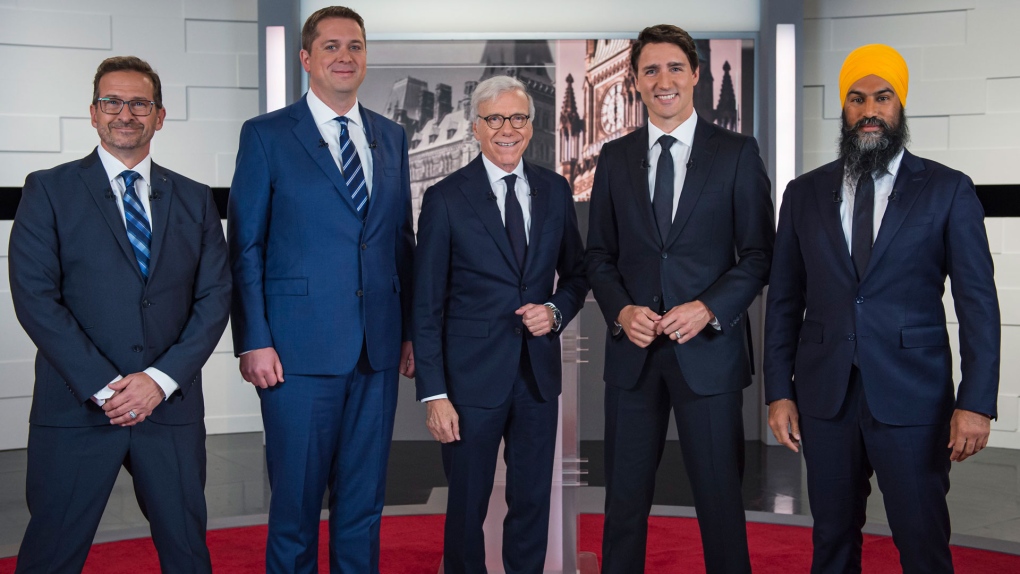 OTTAWA -- Four federal leaders took the stage for the French-language TVA debate Wednesday night -- and in the heat of the exchanges they each made statements containing inaccuracies.

The Canadian Press Baloney Meter, which is a dispassionate examination of political statements culminating in a ranking of accuracy on a scale of "no baloney" to "full of baloney," weighs some of the misleading things they said.

"We know that the choice that we made is different than the Conservatives' choice. We chose to lower the taxes for the middle class and to raise them for the richest one per cent, we chose to invest in our families, in our seniors, in our communities, in infrastructure -- because under the Conservatives it was austerity and cuts."

The Conservative predecessors to Trudeau's Liberal government posted annual deficits between 2008-09 and 2015-16. The annual shortfalls under former prime minister Stephen Harper peaked at $55.6 billion due to the government's efforts to stimulate the economy in the aftermath of the global financial crisis and subsequent recession.

Starting in 2010-11, the Conservative deficits became smaller and smaller each year but never completely disappeared. After the Liberals came to power in 2015, the country's shortfalls grew much larger.

Under the Conservatives, total program spending, as a percentage of gross domestic product, peaked at 15.9 per cent in 2009-10 and decreased in each of the following years until it reached 12.8 per cent in 2014-15, said Tammy Schirle, an economics professor at Wilfrid Laurier University.

Schirle pointed out that, even with the decline, program spending under the Harper Conservatives was higher in each of the 10 years they were in office compared to 2005-06, the last year Paul Martin's Liberals were in power.

Stephen Gordon, an economics professor at Universite Laval, said the Conservatives' deficits were mainly caused by a drop in revenues during and after the 2008-09 recession.

"(The) deficit was eliminated by keeping growth rate of spending less than growth rate of revenues, so revenue would eventually catch up," Gordon wrote in an email.

"But holding the line on spending did mean program cuts, since costs increased over time."

He described Trudeau's statement that the Conservatives oversaw austerity and cuts "fairly accurate."

Kevin Milligan, a University of British Columbia economist, said to hold spending constant in nominal terms required cuts in some areas because expenditures in other areas -- like Old Age Security, pensions and provincial transfers -- kept growing.

"So, it is fair to say that spending restraint characterized the years 2010-2015," Milligan said.

Moshe Lander, of Concordia University's economics department, said Trudeau was "right technically" in that the reduced deficit was due to spending cuts.

"However, there was still more spending than tax revenue in every one of those years," Lander said.

The verdict: "Some baloney" -- the statement is partly accurate but important details are missing.

"That is your secret agenda -- to legalize or decriminalize hard drugs."

In an exchange that started with the topic of cannabis legalization, Scheer accused Trudeau of having a hidden plan when it comes to harder drugs.

Trudeau quickly accused Scheer of employing "the politics of fear" and of refusing to accept science that shows lives can be saved by supervised injection sites.

"This is a problematic statement and Justin Trudeau stated recently his party would not legalize hard drugs any time soon," said Daniel Beland, who is director of McGill University's Institute for the Study of Canada.

In a recent interview with Global TV, Trudeau said: "We're not looking at full decriminalization at all right now."

"This was adopted even though Trudeau opposed the idea," Birch wrote in an email. "At that convention, Trudeau indicated he would not go forward with that idea."

Instead, he has promised to work towards the implementation of harm-reduction strategies, such as the creation of safe, supervised injection sites, to address Canada's opioid crisis.

"This being said, Trudeau has stressed a desire to listen to scientific evidence," Birch said.

"Some of the best evidence supports harm reduction. Economists, as experts, are critical of the prohibition approach as it is costly and ineffective."

Birch said Scheer's statement appears to be based on the proposal adopted at the Liberal convention in 2018. But she added it is not in the Liberal platform.

Paul Kershaw, of the University of British Columbia's School of Population and Public Health, said he hasn't seen any evidence in the Liberal platform to support Scheer's statement.

He added, however, that there is considerable evidence a harm-reduction strategy would benefit from legalizing access to poison-free drugs.

"So, there are experts in health promotion and harm reduction who might wish there is a 'secret agenda,' " he said.

"You cannot hide it -- you want to impose a pipeline on Quebecers. It is not acceptable."

On a couple of occasions, Singh accused Scheer of having a plan to build an oil pipeline across the province, even if Quebecers oppose such a project.

Quebec Premier Francois Legault has said there's no appetite for a new pipeline going through his province and, indeed, many Quebecers have voiced strong opposition to such a project.

Scheer has been pitching the Conservatives' plan to create a national energy corridor as a way to benefit Canada's struggling oil-and-gas sector and the environment. The corridor, he's argued, will allow the federal government to address environmental concerns up front and create certainty for investors.

Beland said the proposed corridor would face a lot of legal, political and regulatory roadblocks so it might indeed be hard for a Scheer government -- especially if it's a minority government -- to impose a pipeline on Quebec.

Birch said an attempt to impose a pipeline would lead to a political battle in Quebec and multiple ones with Indigenous Peoples and other communities that do not want pipelines in their backyards. A future Conservative government would not be able to easily go around federal and provincial laws on environmental impact assessments, she said.

"It appears to be a simple, obvious solution to a complex problem that is causing real economic hardship. Yet, it is politically difficult to implement and, economically, it is a questionable solution," she added.

Lander said Singh's statement is "theoretically true" since, technically, the federal government has jurisdiction over pipelines that cross provincial borders.

"However, would a Conservative government impose the pipeline over the objections of provincial premiers and Aboriginal groups?" Lander asked.

"Highly unlikely without an overwhelming majority, especially in the jurisdiction that it would override."

"Why sacrifice -- with promises of compensation that are purely theoretical where no one has seen the first cent -- why sacrifice supply management, which is so important in Quebec, to protect the auto industry in Ontario?"

The Bloc leader was criticizing the Canada-United States-Mexico Agreement, the revised North American free-trade agreement, which has provided more access to Canada's dairy market for American producers by opening up the controversial protective system known as supply management.

In August, the federal government announced $1.75 billion in compensation for Canadian dairy farmers to offset a loss of market share resulting from earlier free-trade agreements with Europe and countries on the Pacific Rim.

Canada has approximately 11,000 dairy producers, about half of whom are in Quebec. They will receive the money over eight years.

Major groups representing the dairy industry said they were satisfied with the compensation.

At the time, the government promised a similar program would be created to address market share given up by Canadian farmers in CUSMA, but only after the new deal comes into force.

Mark Warner, a Canada-U.S. trade expert based in Toronto, said Blanchet's comment that the federal government sacrificed the dairy industry in favour of the auto industry is not "very accurate."

For example, Warner said in the case of the CUSMA Canada made "only modest concessions" on dairy compared to the trade deals with Europe and the Asia Pacific.