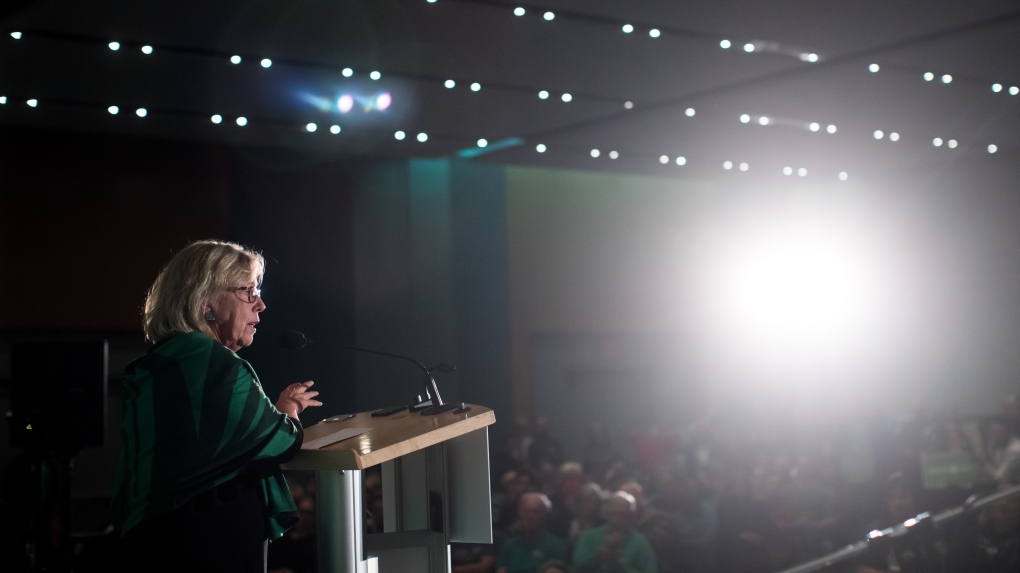 Green Party Leader Elizabeth May addresses candidates and supporters during a rally in Vancouver, Saturday, Oct. 19, 2019. THE CANADIAN PRESS/Darryl Dyck

VANCOUVER -- Green Leader Elizabeth May said in a release Sunday that if her party is elected Monday, it will be the last federal government in Canada chosen by the first-past-the-post system.

May said a Green government would launch a citizens' assembly with a mandate to make recommendations to Parliament on a new electoral system based on proportional representation.

"Canada is among the very last free and prosperous countries in the world still using the outdated first-past-the-post voting system," May said in the statement. "We need to change immediately to proportional representation, a system that translates all votes into representation in Parliament and doesn't classify more than half the electorate as losers unworthy of representation."

The Greens also say they will lower the voting age to 16.

"It flies in the face of fairness that 16- and 17-year-olds are old enough to work and pay taxes but are not allowed to vote for the government that spends that tax revenue," May said.

The Liberals included electoral reform as part of their platform for the 2015 election but dropped the idea once they were in power.

May also said a Green government would have Elections Canada develop a framework to fight dishonest campaign advertising, claiming that "current political parties seem to be able to lie with impunity."

That comment came after the Green party issued a release Saturday claiming it had contacted former parliamentary budget officer Kevin Page to clear up what it called "NDP misinformation."

According to the release, the NDP distributed a flyer throughout Vancouver Island saying the Greens' platform budget had failed a review by Page.

However, Page said in the release that the Green platform received an overall passing grade on a fiscal assessment from the Institute for Fiscal Studies and Democracy, which he leads, at the University of Ottawa. He said the same grade was given to the Conservatives and the NDP.

This report by The Canadian Press was first published Oct. 20, 2019.