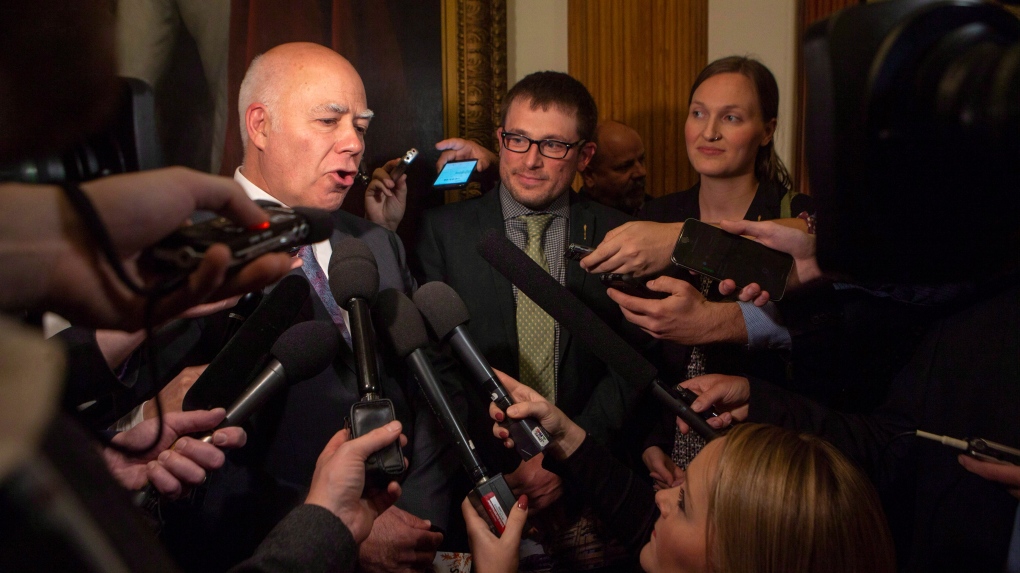 Green Party of New Brunswick Leader David Coon speaks to the media following the Throne Speech at the New Brunswick Legislature in Fredericton on October 23, 2018.THE CANADIAN PRESS/James West

FREDERICTON -- In 2015, the Atlantic Canada election map was awash in red as the Liberals swept all of the region's 32 seats, but this year the Green party is hoping to build on recent provincial success and make its own mark.

New Brunswickers elected three Green members to the legislature last year, and this year, eight members were elected in neighbouring Prince Edward Island -- making them the official Opposition in the Island legislature.

When voters go to the polls in the Oct. 21 federal election, the Green party will be eyeing a breakthrough in a number of key Atlantic ridings, with Fredericton at the top of the list.

The riding has a history of electing Liberal and Conservative MPs, but voters here have shown an affinity for the Greens -- New Brunswick Green Leader David Coon has held the seat of Fredericton South in the provincial legislature since 2014.

"New Brunswick is not going to go unanimously Liberal like it did last time. There will be seats that change," said Donald Wright, a political scientist at the University of New Brunswick. While the Liberals face a Conservative challenge in ridings to the south, in Fredericton the competition comes from the left.

"Fredericton has voted Green for David Coon in the last two provincial elections. So clearly there is a Green, progressive vote up for grabs in Fredericton -- a university town with an educated civil service," Wright said.

Running for the Greens in Fredericton is Jenica Atwin -- a young mother of two who works as a researcher and program co-ordinator in First Nations education. She's quick to admit she isn't the sort of candidate who has won the riding in the past.

"I'm someone who has broken the status quo most of my life. I never fit the mould," she said. "I challenge the mould and I ask those tough questions, and I've been trained to be very critical of the status quo."

Atwin said she feels positive about her chances but acknowledges it could be a tight three-way race.

"We're seeing a lot of support at the door from across the political spectrum, really, considering Green as an option this time around," she said.

Atwin is up against Liberal incumbent Matt DeCourcey, who won by a wide margin in 2015. DeCourcey admits it could be a close race this time, and he is warning that vote-splitting on the left would favour the Conservatives.

"The number 1 threat that I hear from people ... we can't risk supporting a party that will help elect a blue candidate in Fredericton. I think people understand what the real risk is of electing a Conservative candidate and having Andrew Scheer become prime minister," DeCourcey said.

The New Democrats were late announcing federal candidates in New Brunswick and were recently rocked by an announcement that former provincial candidates were jumping en masse to the Green party. However, many of those people said there was a misunderstanding and their names should not have been included among the defectors.

Still, Wright said the NDP's internal problems could help the Greens pull off an upset in Fredericton.

"That progressive, left, NDP, feminist vote is going to be looking for a place to park itself, and it might be with Jenica Atwin and the Green party," he said.

Federal Green Leader Elizabeth May has made a number of visits to the provincial capital to campaign with Atwin, and on Tuesday, Coon and P.E.I. Green Leader Peter Bevan Baker took part in a campaign event in the city.

"We know the areas where we are strong, and Fredericton is one of those areas," Bevan Baker said, adding that he thinks the Greens have "a realistic shot" in a couple of Prince Edward Island ridings.

"The Green party is not going to form the next government in Ottawa, but we could, with the right number of seats, actually form the balance of power," he said. "We could be a very important and influential part of the next Parliament."

Coon said he's hearing from people who want to elect a Green rather than just vote against the Liberals or Conservatives.

"It's very clear, where Greens have been elected in provincial legislatures, it has been vote for the party rather than a protest vote," he said. "Once a few of us got elected and it became clear that Greens were electable ... that's really created a tipping point."

This report by The Canadian Press was originally published Oct. 10, 2019.