Greens' universal pharmacare proposal costed at $27B next year

Introducing universal pharmacare would cost $26.7 billion in the first year, the federal Greens said Wednesday as they released the financial details attached to their platform promises.

The pledge to ensure all Canadians have access to medication is the biggest new spending item in the Green plan, which is the first federal party to release a platform with price tags for its pledges as reviewed by the parliamentary budget officer. The Conservatives have been costing promises one by one.

The platform shows that by fiscal year 2024-25, the Greens' pharmacare plan would cost $31.3 billion, but by then their proposed budget has the provinces contributing $17 billion.

The Liberals and NDP have also pledged a national pharmacare program.

NDP Leader Jagmeet Singh has said he would spend $10 billion a year, working under the premise of a $23.7-billion total cost and having the provinces pay 60 per cent -- roughly what they already spend on drug coverage through other programs.

When Liberal Leader Justin Trudeau made a pharmacare pledge of his own this week, he wouldn't say how much it would cost or when it would take full effect.

Trudeau has said he would be guided by a panel led by former Ontario health minister Eric Hoskins, who pegged the cost at $15.3 billion each year by 2027, when the program would be fully operational.

"The big-ticket items -- pharmacare -- turns out to be a cost," she said in Halifax. "But it's essential. We have to do it."

When the parliamentary budget office came back with that unexpectedly high tally, the party had to adjust its budget, May said, including planning to tax financial transactions at 0.5 per cent instead of 0.2 per cent.

According to the costing, that tax would bring in $18 billion a year by fiscal year 2024-25. Other new sources of revenue largely target businesses and wealthy Canadians, including increasing the corporate tax rate from 15 per cent to 21 per cent to bring in $16 billion in revenue, closing a capital-gains "loophole" to raise $15 billion and applying a one-per cent tax on wealth above $20 million for $7 billion.

(The capital-gains "loophole" is the system of taxing increases in wealth from, say, selling stocks at a lower rate than employment income. The argument is that this disproportionately benefits people who live off investments at the expense of people who work for pay.)

Other big-ticket spending promises include eliminating post-secondary tuition and forgiving student debt for about $16 billion in the first year but levelling out to about $9.5 billion annually before long, $5 billion for universal child care, and $9.6 billion to allocate one per cent of GST revenue to housing and other municipal infrastructure.

The Greens propose to balance the budget in 2024-25, though May said if economic circumstances demand increased spending, the Greens would respond to that.

"We've never been slavishly addicted to balanced budgets," she said. "We completely agree that if you need to spend to stimulate the economy, that's an appropriate thing to do."

The Greens' platform is more than 80 pages long, but May said they asked the parliamentary budget office to review only 24 of their larger proposals. Their full plan was released last week, and May said in addition to needing to impose a higher tax on financial transactions, there are other "minor discrepancies."

A proposal to tax "sugary drinks" wasn't included in the platform, but is in the costing as bringing in between $300 million and $400 million, depending on the year.

Other suggested new revenue streams include $5.2 billion by 2024-25 by collecting tax from tax havens, $4.3 billion from charging a five-per-cent surtax on commercial-bank profits, and $889 million from taxing foreign internet-based companies such as Google, Amazon and Facebook.

Other proposed expenses include an initial spend of $3.3 billion to set up dental care for low-income Canadians, falling to $1.8 billion by 2024-25; a $4.9-billion increase to the Canada Pension Plan; and $750 million a year to change the Canada Post vehicle fleet to electric. 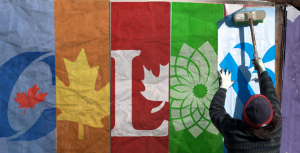