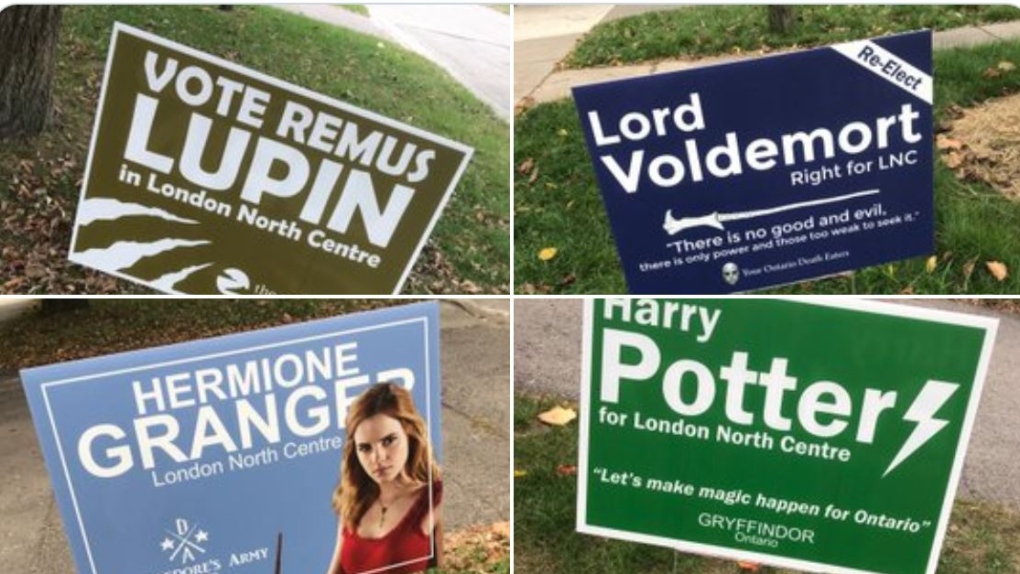 TORONTO -- Mysterious election signs have “magically” started showing up on one London, Ont. street, including one showing Harry Potter from the Gryffindor Party.

When asked about the signs that have appeared in front of his house this week, Wes Kinghorn told CTVNews.ca over Twitter: “Let’s just say they magically appear and disappear, only on our street!”

But the Boy Who Lived isn’t the only one running for the London North Centre riding. Despite being lifelong friends, Potter appears to be competing against booksmart Hermione Granger, who’s running for Dumbledore's Army Party.

On Saturday, Kinghorn tweeted photos of the four election signs with the caption, “The race is getting weird.”

The riding is fairly crowded with other Harry Potter characters offering their vision for Muggles and wizards alike. Also in the running were werewolf and former Defence Against the Dark Arts professor Remus Lupin, as well as Potter’s mortal enemy Lord Voldemort, who’s representing the “Ontario Death Eaters.”

Some of the characters’ campaign signs have slogans based on their quotes from the popular J.K. Rowling book series. He Who Must Not Be Named is running on an authoritarian platform with his sign reading: “There is no good and evil -- there is only power and those too weak to see it.”

Kinghorn told CTVNews.ca that “closer to the election, there can be a lot of divisiveness in our politics which is normal. That happens. So I think it’s kind of fun to put something out there that everyone can get behind.”


'The Ministry of Magic got in touch': Kinghorn

Since being posted on Saturday morning, Kinghorn’s tweet has been racking up dozens of likes and comments with “Harry Potter” references.

“These signs are not 'approved' … the Ministry of Magic is not going to be happy,” Tom Cull tweeted, which Kinghorn responded with “(I) guess I’ll be getting a visit from Dolores Umbridge.”

Another person tweeted, “I should have known our Diagon Alley was (in London’s Woodfield neighbourhood).”

“I thought that was so clever, so I thought, ‘what if used a universe where you could have some competing people?’” he said in a phone interview.

“A couple of the kids in the neighbourhood are huge ‘Harry Potter’ fans -- and our house is on a school route -- so in the mornings they appear as the kids are on their way to school,” he explained.

He said he takes the signs down during the day and the evenings to prevent them from being stolen.

Kinghorn, a big fan of the books himself, said the election signs are custom made.

Although he and his wife, who acted as his proofreader, would like to remain neutral, he predicts Hermione will end up winning “in a landslide.”

In the next election cycle, Kinghorn said residents could expect signs from characters Luna Lovegood and Bellatrix Lestrange.

Ha! Love it... guess I’ll be getting a visit from Dolores Umbridge

Well they can't be real because they are in an illegal location for election signs in #ldnont between the sidewalk and the boulevard, and I know only The Ontario Death Eaters would be sinister enough to do that!