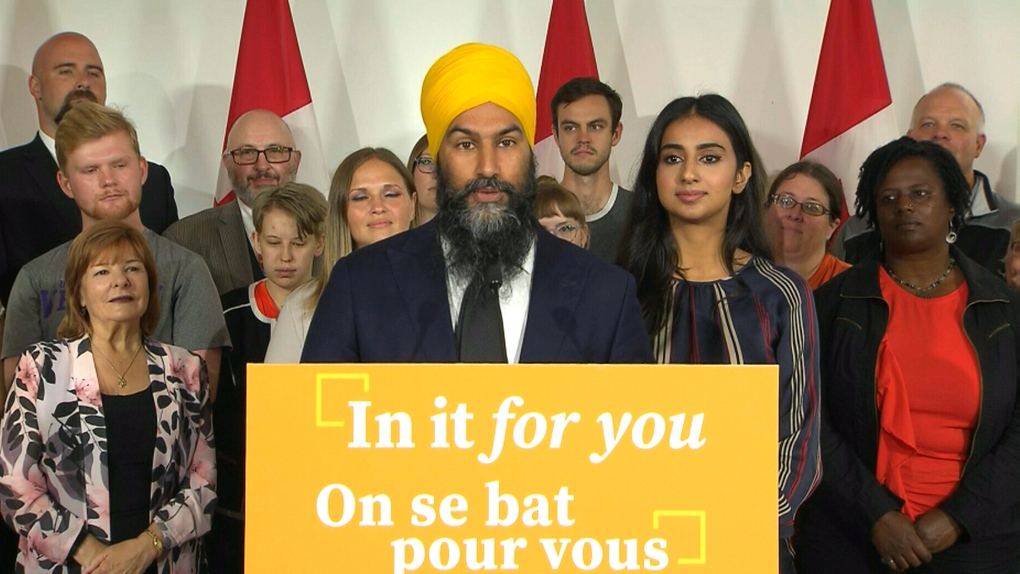 Yet the excitement of the campaign launch at a Goodwill store in London, Ont., belied the many challenges that Singh and the New Democrats will need to overcome in the next 40 days as they fight for Canadians' votes.

Speaking minutes after Justin Trudeau met with Gov. Gen. Julie Payette in Ottawa to dissolve Parliament and start the race, Singh wasted no time sketching out his party's message in broad strokes.

"We are living in a country where rich people are getting richer," he said in French. "A country where the majority of the population does not have access to the same advantages or benefits. A country where the Conservatives and the Liberals in government have created a system that benefits the rich and lets the rest down."

Singh specifically took aim at the rising cost of medications, dental care, cellphone and internet services and housing, which he promised to fix by introducing initiatives such as universal pharmacare while cracking down on corporate greed.

Among the measures the NDP has promised is closing corporate tax loopholes and a new tax on anyone whose assets are valued at more than $20 million.

The parliamentary budget office has estimated such a tax could generate nearly $70 billion in new government revenue over the next decade -- $7 billion a year, on average, with current federal spending of about $355 billion a year. Though the PBO also admits the real result is highly uncertain as some would move their wealth to avoid such a tax.

The NDP leader also promised to tackle climate change by "taking on the big polluters and to end the fossil-fuel subsidies" before turning on the Liberals and Conservatives, whom he accused of having failed Canadians during their various times in government.

"Four years ago, Justin Trudeau charmed us with pretty words and empty promises. He said the right things, but he didn't do them," Singh told the roughly two dozen supporters who turned out for his campaign launch.

"Behind closed doors, Justin Trudeau does whatever the wealthy and powerful corporations want him to do. It's clear: Justin Trudeau isn't who he pretended to be."

Singh later pointed to the SNC-Lavalin affair as proof the Liberals are more concerned with big business than the plight of average Canadians.

As for the Conservatives, Singh warned that a Tory government under Andrew Scheer would cut many of the services that Canadians rely on.

The NDP's decision to launch its campaign in southern Ontario, where it has fared relatively well in the past, was not an accident: the area has been hit hard by job losses in the manufacturing sector, including among steel and auto workers.

Yet even as New Democrats were hoping their message would begin to resonate with voters in London and elsewhere who feel that their wallets are being squeezed, the party is facing numerous challenges.

That includes a shortage of cash following years of underwhelming fundraising numbers. The party also lost many of its veteran MPs to retirement and only 235 out of 338 candidates had been nominated as of Wednesday.

Singh refused to be drawn into defending the state of the NDP, insisting Canadians have grown tired of governments "that seem to continually prioritize making it easier for the very rich and making it harder for them ... And I am confident that people will see us in champions who want to put them at the centre and the heart of everything we do."

There are also questions about how Quebecers will respond to Singh given the province was key to the NDP's surprise second-place finish in the federal election in 2011 and returned a smaller but still sizable number of MPs in 2015.

Many observers believe Singh, the first member of a visible minority to lead a federal party in an election, faces an uphill battle in a province that recently passed a controversial ban on religious symbols and where his support in opinion polls has been low.

Singh, who has been a vocal critic of Bill 21, acknowledged the challenge he faces in Quebec. But he also spoke about the importance of defending the French language and culture while expressing the hope his message will resonate there as much as across the rest of the country.

The NDP is also facing a challenge from the Greens, who are running neck-and-neck with the New Democrats in opinion polls at the start of the election campaign. Singh did not mention the Green party or its leader Elizabeth May, but appeared to imply that they offered little other than a promise to fight climate change.

"People tell me all the time that they're worried about health care, affordability for housing and the climate crisis," he said when asked about May and the Greens. "We provide a complete solution."

NDP supporter Judith Warren was on hand for the campaign launch and echoed Singh's allegations the Liberals and Conservatives are more concerned with helping corporate interests and the wealthy than working Canadians.

"A new government has been needed for decades and decades," she said. "Jagmeet is definitely the guy to lead us there. For all those out there saying we need to strategically vote in Trudeau because he's better than Scheer, it's never going to work because the Liberals will always disappoint."

Singh spent the rest of Wednesday preparing for Thursday's Maclean's-Citytv leaders' debate against Scheer and May. He is scheduled to visit Brampton, where he previously served as a member of the Ontario legislature, prior to the debate.

With files from Lee Berthiaume in Ottawa

On family, his love of jiu-jitsu, and Quebec