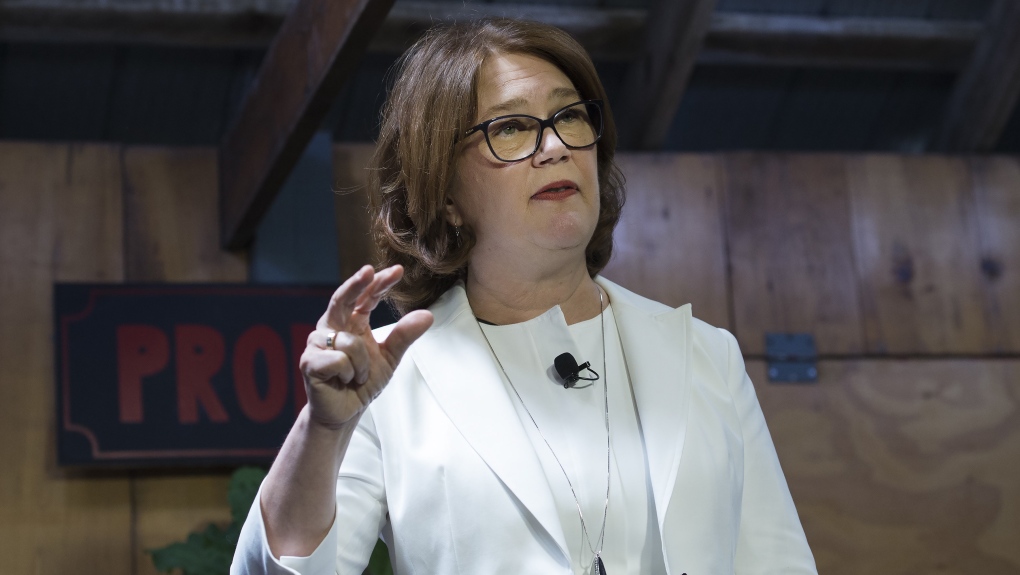 Jane Philpott makes an announcement regarding her political future as running in the next federal election as an independent in Markham, Ont., on Monday, May 27, 2019. (THE CANADIAN PRESS / Nathan Denette)

But the former Liberal cabinet minister hopes her resignation over Prime Minister Justin Trudeau's handling of the matter, and her eventual removal from the Liberal caucus months before the fall election, will resonate with voters in the Toronto-area riding of Markham-Stouffville where she's running as an Independent.

"The most common response that I hear from people is that they say 'thank you' to me for standing up for what I believe in," she said in a recent interview in her campaign office in Stouffville, Ont.

"Regardless of what people's political persuasion is, a lot of people respect the fact that you take a stance out of principle."

The governing Liberals have taken a hit in public opinion polls in the wake of the SNC-Lavalin saga, and it's unclear whether a recent and damning report on the issue from the federal ethics commissioner will cause a further dip.

At the local level, however, experts say it's likely voters who previously supported the Liberals will be split between Philpott and former Ontario health minister Helena Jaczek, who will carry the Liberal banner on Oct. 21.

That could deliver a win for the Conservatives, who hold the riding provincially and have a strong presence in the area, they said.

"It will divide a vote that was not enormously greater than the Conservatives got in that riding in the last election when the Trudeau Liberals were doing pretty well across the country," said Robert Drummond, a political science professor at Toronto's York University.

As the incumbent, Philpott would typically have a sizeable advantage over her challengers, but Drummond said her status as an Independent, particularly one expected to face an opponent from her former party, means she will likely have a "tough time."

Pauline Beange, who teaches political science at the University of Toronto, said Philpott benefits from name recognition and federal experience, but much will rest on what her rivals' campaigns focus on.

Aside from Jaczek, Philpott will face local entrepreneur Theodore Anthony, who is running for the Conservatives, and Green candidate Roy Long. The New Democrats have yet to say who, if anyone, will represent them in that riding.

In a recent interview, Jaczek said she and Philpott would probably agree on policy proposals, which could make it difficult for some voters to choose. But in the end, she said, constituents want a representative with the backing of a party.

"To have effective action, you need to be part of a group," she said. "People want to show their support of the general direction of a political party, that's the way most people have looked at politics, and I think that's the way they're looking at it in Markham-Stouffville."

Beange, the political science expert, said she couldn't rule out the possibility that Philpott's actions in standing up to her former party could win over Conservative or swing voters.

"But if I were her, I wouldn't want to base my campaign on that," she said.

Virginia Mitchell, who has lived in the riding since 2007, said she normally votes Conservative federally but is rethinking her options after seeing how the Progressive Conservative government has operated in Ontario under Premier Doug Ford.

None of the major parties inspire great confidence this time, she said, but Philpott has made a positive impression.

"I've never voted for her ... but I am very impressed with what she stuck up for and her values and the fact that she could walk away from that. That has impressed me, that truly has impressed me, so that's another thing to think about," she said.

Another resident, Gary Henry, said he also hadn't voted for Philpott before, but wants more transparency and integrity in politics and she seems to fit the bill.

"She's a woman that's resilient, she's a fighter, that's what I like about her," he said. "She's beyond politics."

Philpott, meanwhile, said she's aware that some in the community may have concerns about her ability to effect change as an Independent if she's re-elected.

Her volunteers are given a cheat-sheet titled "The Strength of Independence," a list of 10 points meant to stress the advantages of not being tied to a party. Among them: the freedom to speak up, and greater accountability to constituents.

The former physician, who served as health minister, Indigenous services minister and then president of the Treasury Board before being booted from caucus, said she doesn't mind being considered a long-shot candidate.

"I think these are unique circumstances that we're facing at the moment and there's enthusiasm about that as well," she said.

"I am taking nothing for granted and I know that many people don't think that we will be successful but they don't see how hard we're working ... and I hope that we'll surprise people on election day."