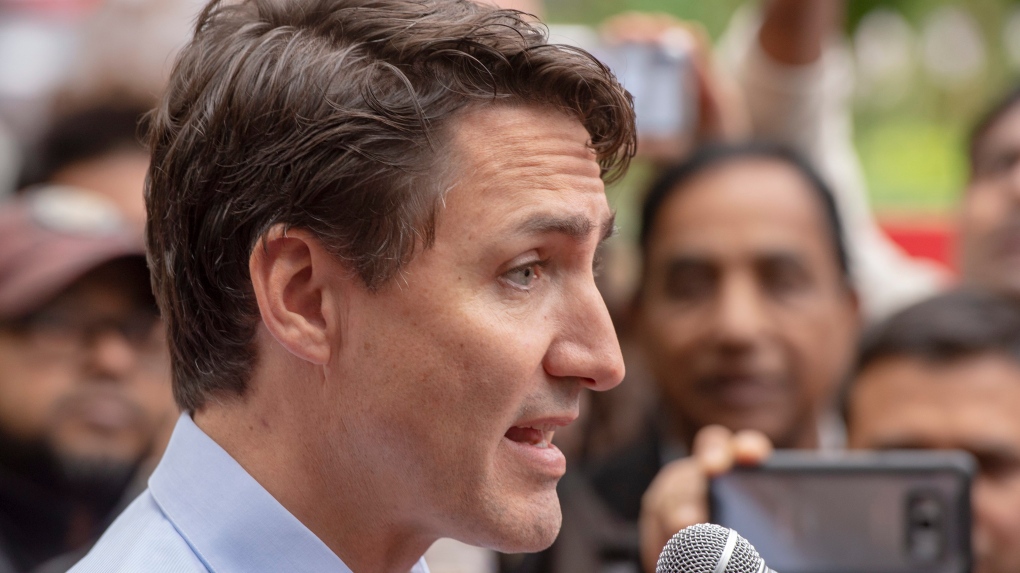 OTTAWA – Liberal Leader Justin Trudeau says that if his government is re-elected he would look at broadening the legislation that put into force Canada's current physician-assisted dying law.

"When it comes to an issue that is so important, so delicate, so difficult for so many families, the government needs to make sure we're getting the balance right, the balance between protecting the most vulnerable, and making sure people's rights and choices are respected," Trudeau said this morning in Quebec. "We will move forward in a responsible way with legislation that responds to that."

In September the Quebec Superior Court ruled that sections of the federal and Quebec laws on medically-assisted dying were invalid, finding that they were unconstitutional because they were too restrictive. Specifically the court took issue with the Criminal Code requirement that a natural death be "reasonably foreseeable" in order for a person to be eligible for assisted death. Now, both federal and provincial governments have six months to review the ruling and revise their laws.

Trudeau said a re-elected Liberal government would review the court’s decision within six months with the intent of modifying the law, in response to what he described as an "evolving" societal position on the issue.

The topic hit the campaign trail on Thursday after each leader spoke to the issue during Wednesday's TVA debate.

During the debate Trudeau spoke about the importance of finding a balance with the highly sensitive law, but said he wouldn’t appeal the court's ruling. This was the same approach that Bloc Quebecois Leader Yves-Francois Blanchet said he'd take.

Conservative Leader Andrew Scheer said Thursday that he thinks the best approach is to appeal the ruling, so the matter would be referred to the Supreme Court of Canada. It was a 2015 Supreme Court ruling that found prohibiting assisted death was against the Canadian Charter of Rights and Freedoms, forcing the Liberal government to act.

"When this bill was before Parliament I voted against the current government’s legislation because I did not believe it had enough safeguards in it and now with this ruling I think it’s best we appeal to the Supreme Court so we can get certainty on the framework within which Parliament can legislate," Scheer said.

NDP Leader Jagmeet Singh said during the TVA debate that he thinks the decision from the Quebec court makes it clear that law as it stands is too limited, and he committed that an NDP government would move to broaden the law, further opening the criteria for eligibility.

The bill, known as C-14 at the time it wound its way through Parliament, made it so that Canadians 18 years of age or older who are considered mentally competent could access an assisted death, under a series of eligibility criteria. It also put in place protections for medical professionals who would play a role in administering the assisted death. Not included in the bill—but called for by some at the time— was the ability for patients to give advance directives, or for mature minors to have the ability to seek an assisted death.

Since the Liberals passed this entirely new regime in 2016 they have faced questions about changing the law. Even before it passed the legislation generated considerable parliamentary debate, with a handful of Liberal MPs voting against it, saying that as it was drafted it would be unconstitutional.

One of those MPs, David Lametti, was years later appointed minister of justice. Once he entered cabinet he said that he was interested in reviewing proposed changes, though a year prior his predecessor Jody Wilson-Raybould—who is now running as an independent—said the current law struck the right balance and would stand.

Wilson-Raybould's comments came one day after the death of Audrey Parker in 2018, a cancer patient who said Canada's law on medically-assisted death didn't allow her to end her life on her own terms.

The legislation included a provision requiring that within 180 days of the bill passing, the government initiate an independent review of outstanding issues. Opening up the law to allow mature minors to seek medical assisted death, and permit advance directive requests, as well as requests where mental illness is the sole underlying medical condition, were the main issues that the expert review panel was to assess.

The legislation also has a five-year review mechanism built-in, meaning that the next government would have to have this debate by 2021 at the latest.

From 2016 to the end of 2018, there were close to 7,000 medically-assisted deaths in Canada, Dr. Paul Saba with the Coalition of Physicians for Social Justice recently told CTV National News.