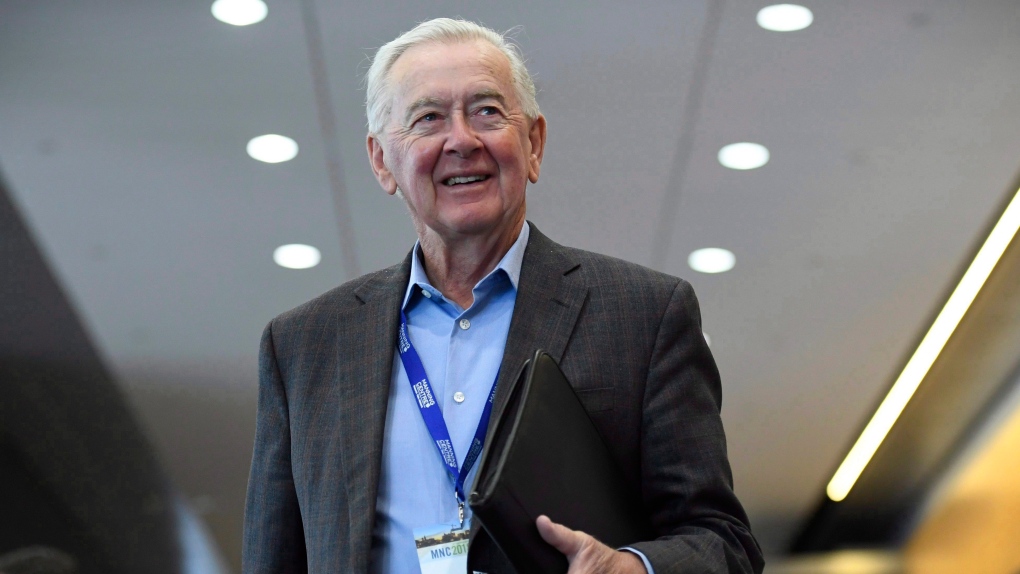 Preston Manning, founder and President of the Manning Centre, arrives for morning sessions at the Manning Networking Conference in Ottawa on Friday, Feb. 9, 2018. THE CANADIAN PRESS/Justin Tang

OTTAWA -- The Manning Centre is a driving financial force behind a network of anti-Liberal Facebook pages pumping out political messaging and memes during the federal election campaign.

The organization, launched in 2005 by the founder of the Reform party, Preston Manning, gave a total of $312,450 to a network of related third-party advertising groups that operate on Facebook and Instagram.

In most cases, the centre was the sole donor listed by those groups in disclosure forms filed with Elections Canada.

The bulk of the Manning Centre's contributions -- $240,500 -- went to Canada Strong and Proud, the network's national politics-focused page.

That page is affiliated with a series of provincial pages, including New Brunswick Proud, Nova Scotia Proud, NL Strong and Quebec Fier, which all got Manning Centre funding.

Alberta Proud, BC Strong and Ontario Strong are also part of the family of organizations. The various groups often post and share similar contents and ads.

Confusingly, those groups have no affiliation with Ontario Proud, Canada Proud or B.C. Proud, which are similar but separate anti-Liberal groups set up and run by Jeff Ballingall, a former Conservative political staffer and media figure.

Several of the provincially focused groups have conducted robocall and mass automated text campaigns over the past two years, including the "Sue From Ontario Strong" text campaign from June.

And since late July, Canada Strong and Proud has spent more than $103,000 on Facebook ads, with most of that coming before the election campaign began formally on Sept. 11. It reported just $7,441 in campaign-period expenses in its recent disclosure to Elections Canada, with the provincial affiliates also spending up to a few thousand dollars each.

This is the first time Canada Strong and Proud and most of its sister organizations have been required to publish details of their financial backing.

Requests for comment sent to several of the groups were not returned.

Troy Lanigan, president of the Manning Centre, said in an interview Wednesday he was thrilled his organization had the resources to help broadcast a stronger conservative message during the campaign.

Lanigan said the balance in third-party advertising between centre-left and centre-right groups has traditionally been heavily weighted to the former's advantage. In this election, also, labour unions and environmentalist groups combined are strongly outspending centre-right advocacy groups.

Lanigan said that part of the Manning Centre's goal for the funding, as a group that supports conservatives, was "balancing that message out."

Canada Strong and Proud's first big chunk of spending was on a video encouraging Canadians to be proud of the oil-and-gas sector in the country, though it has recently switched to a more narrow, personalized critique of Liberal Leader Justin Trudeau during the formal campaign period.

"Obviously as a western-based organization, I think some of the pro-energy messages resonate with Manning (Centre) supporters," Lanigan said.

He added the centre had chosen to support the linked Proud groups because of their reach and past success gaining national attention.

"These are groups that were on the radar, and had our attention, and were looking for support," he said. But the Manning Centre was not looking to micromanage their message, Lanigan added.

The Manning Centre previously supported the network's New Brunswick branch with a $7,000 donation during the 2018 provincial election there.

Canada Strong and Proud and its affiliated groups are among a host of digital advocacy groups that have embraced a new, meme-driven type of political action during this election period, creating messages for others to spread.

Lanigan said he wanted to take advantage of clever advocacy and groups that have been "smart with limited resources."

He said it came back to the imbalance in spending between groups like Unifor -- which has spent around $1.3 million so far this election -- and right-wing groups like his own.

"We'll be outgunned, we'll be out-resourced, but we're not lying down. And that's been a huge sea-change from what it was in 2015."