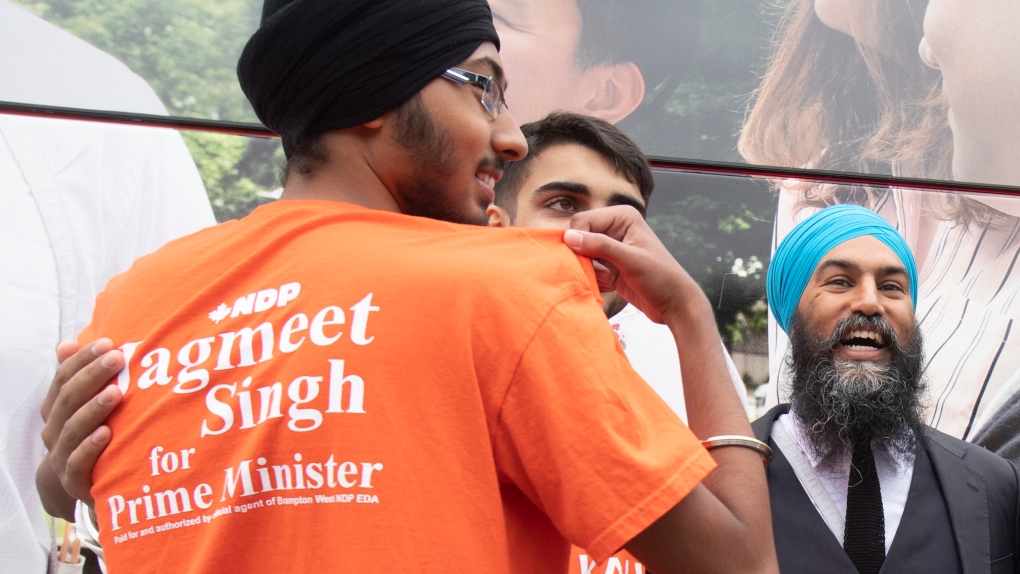 NDP leader Jagmeet Singh laughs as he reads the slogan on a volunteer's shirt while taking photos following an event in Brampton, Ont., Thursday, September 12, 2019. THE CANADIAN PRESS/Adrian Wyld

OTTAWA -- Federal NDP Leader Jagmeet Singh channelled his roots as a member of the Ontario legislature Thursday by promising to build a new hospital in the City of Brampton if he becomes prime minister.

The commitment on Day 2 of the federal election campaign -- made despite the fact hospitals fall squarely within the domain of the provinces -- suggests the New Democrats are concentrating their efforts in areas where they have the best chances to win seats.

Although the federal Liberals swept Brampton's five seats in 2015, Singh is well-acquainted with the area northwest of Toronto, which he represented as deputy leader of Ontario's New Democrats. It also has a large south Asian population and at one point Thursday, Singh answered a question in Punjabi.

"After four years of having these five Liberal MPs, people in Brampton continue to suffer," Singh said at the start of his campaign event, which was held beside a busy road outside the Brampton Civic Hospital.

"Here at this hospital in 2017, reports show that 4,352 people were treated in hallways. Hallway medicine has become a reality in this city and it is simply wrong."

The NDP leader acknowledged the difficulty he could face in fulfilling the promise of a new hospital, given that Doug Ford's Progressive Conservative government would ultimately have jurisdiction over the project.

"It's going to be difficult to work with a Conservative premier who has not made health care a priority and has instead been cutting services. That is going to be a challenge," he said.

"But if we show the courage, we show the conviction, we show that we're ready and that we've got money available on the table to make this a reality, I wouldn't see why a premier would say no to that."

While much of the event was focused on Brampton, Singh did attempt to tie it to the NDP's larger promise of introducing universal pharmacare by 2020, while criticizing successive federal Liberal and Conservative governments for not spending enough on health care.

The NDP has said it will invest $10 billion to tackle wait times, expand access to care and deliver universal pharmacare, claiming the new drug plan would save Canadians about $4.2 billion per year.

The party has said it plans to pay for those promises by closing corporate tax loopholes, cracking down on tax evasion and introducing a new tax on individuals with assets worth more than $20 million.

Thursday's event was Singh's second since the election campaign officially kicked off Wednesday. The NDP leader launched his campaign in nearby London, Ont., on Wednesday morning before spending the rest of the day preparing for Thursday night's Maclean's/Citytv debate.

It's believed the NDP is limiting its campaign at this stage because of its financial situation, which follows poor fundraising results over the last four years as it has struggled to pay off the debt it incurred during the 2015 election campaign.

Singh found himself again deflecting questions Thursday about the fact the New Democrats do not yet have a full slate of candidates, which he attributed to his efforts to increase the party's diversity. The NDP was missing candidates in almost 100 ridings as of Wednesday.

"I want to do things differently and that's hard to do, I know," Singh said. "But it's important for me and so I'm really committed to making sure we have the most diverse list of candidates possible -- people that really reflect who we are as Canadians."

Singh will be in Toronto for the campaign's first debate with Conservative Leader Andrew Scheer and Green party Leader Elizabeth May. Liberal Leader Justin Trudeau is not taking part.