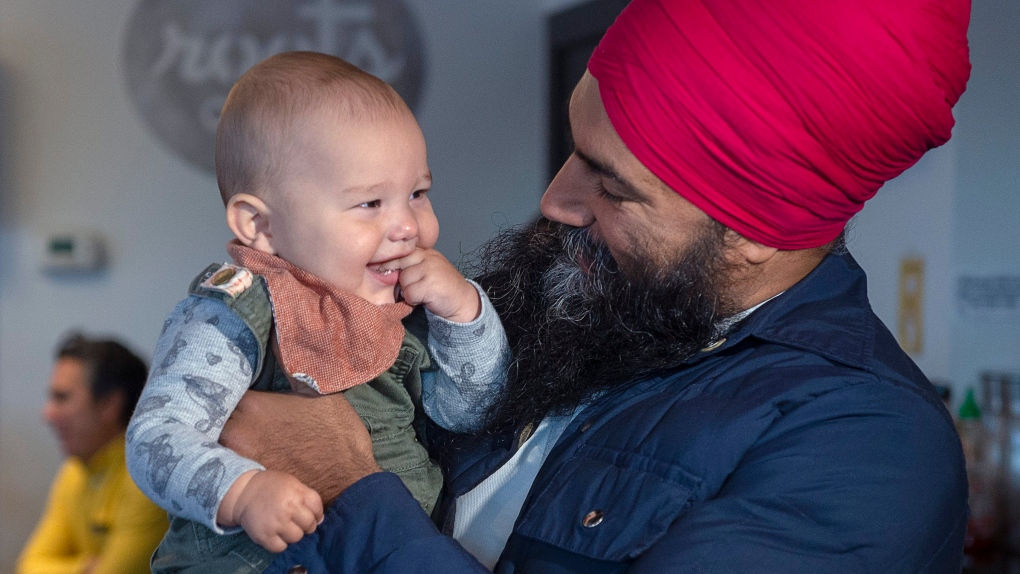 Speaking at Roots Cafe in Vancouver, where he met with young families Tuesday morning before flying to Ottawa, Singh said parental-leave benefits need to be more flexible.

Allowing new parents to condense their parental leaves would give breathing room to families who would struggle to live on 33 per cent of their salaries for a full 18-month leave period, he said.

"It's something that would allow flexibility to families who can't afford to live off the reduced amount," he said.

Condensing parental-leave benefits is one of several ways the NDP would adjust the distribution of EI benefits.

Many Canadians work precarious jobs with unsteady hours, so the NDP is also proposing a universal qualifying threshold of 360 hours for regular EI coverage.

"It will allow for more coverage for more people. That's a bold step forward that responds to the reality of a lot of workers who aren't working a traditional job with traditional hours," he said.

Currently, workers need to have accumulated between 420 and 700 hours of insurable employment during a qualifying period -- typically a year -- to be entitled to EI benefits.

A New Democrat government would also increase the wage-replacement rate to 60 per cent from 55 per cent.

Tuesday was the NDP campaign's eighth straight day in British Columbia, where Singh has made several regionally focused announcements.

The cafe meet-and-greet came the day after Singh said an NDP government would spend $10 billion over the next four years to create 500,000 new child-care spaces in Canada with the goal of offering free services for some parents.

Singh said prices would be capped at $10 a day and build on a similar program in Quebec as well as a pilot project that started last year in British Columbia.

He said the goal is to get to universality, which would mean no cost for families that can't afford it and low cost for those that can.

The Liberals have promised that new parents won't pay any taxes on maternity and parental leave benefits, while the Conservatives have promised a tax credit that would effectively return the money paid.

The Liberals have also pledged to extend EI benefits for parents who adopt and to increase the Canada Child Benefit for children under a year old. Conservative Leader Andrew Scheer has argued that benefit mirrors a similar program introduced by a previous Conservative government that saw all families, regardless of income, receive monthly payments.