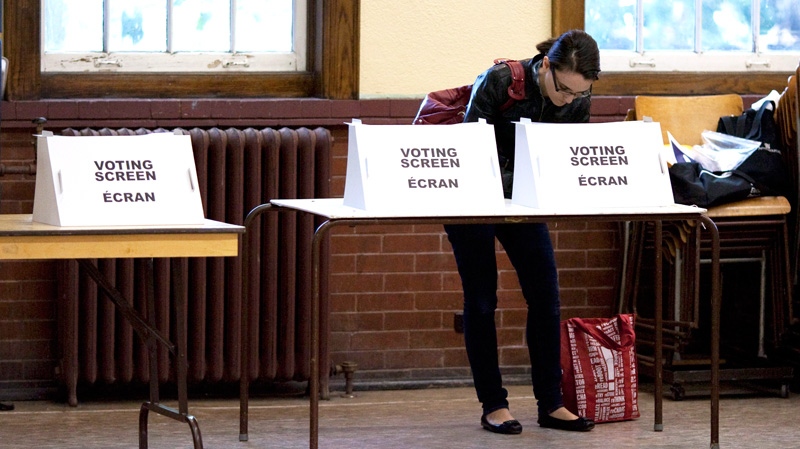 A woman casts her ballot at a voting station in Toronto as voters participate in the Ontario Provincial Election on Thursday, Oct. 6, 2011. (Chris Young / THE CANADIAN PRESS)

OTTAWA - A group focused on encouraging young people to get out and vote on election night launched a new portal to help users navigate policy platforms and ultimately narrow in on their ballot box choice.

Future Majority is an independent advocacy group that helps disengaged young Canadians feel more empowered and informed about their democratic right. In its newest interactive online tool, launched Tuesday, the organization scrapes party promises from their platforms to help inform the results of their ‘Who to Vote For’ survey.

One of the founders of Future Majority, Tyler Valiquette, told CTVNews.ca that climate change is the top issue young people have selected thus far, followed by cost of living and healthcare.

"[The results] match the conversations we’re having across the country as well," said Valiquette, who’s based in Toronto.

It then displays a number of policy pitches, and asks users to select the option that best fits with their values and opinions.

To that end, Valiquette said its critical parties make public their full platforms as soon as possible – and make them more accessible – so that those who use this tool, and others like it, can paint a full picture of what each party represents.

"Politicians should do a better job of getting their platforms released and communicating them more effectively to young people. That’s what we’re doing; we’re cutting through the noise."

Thus far, the NDP, the Greens, and the Bloc have released the entirety of their plans, while the Liberals, Conservatives and People’s Party have released only specific measures.

Valiquette said that in his conversations with young Canadians, they repeat the need for more detail from politicians and more wholesome discussions about policy.

"[Young people] want to hear politicians put forward ideas that are going to make their lives easier. They don’t want this election to become about scandal, they want substance."

He’s referring to the latest controversy that consumed the news cycle after photos and a video emerged of Liberal Leader Justin Trudeau in blackface and brownface last week.

"We travelled across the country after the brownface and blackface scandal and honestly that was not dominating the discourse whatsoever," he said.

Parties have been doing their part to appeal to the young vote, promising cuts to cellphone bills, help with drug costs and mortgage payments, and of course, environmental promises.

Sophie Price is an organizer with Climate Strike Canada, a group that mobilizes young people to protest for more action on climate change. Price, alongside her colleagues, will strike this Friday in Ottawa as a part of the Global Climate Strike.

She said she hasn’t seen "nearly enough" from politicians thus far with regards to climate policy.

"I do see plans set in place, but they’re not to the extent that we need,” Price told CTVNews.ca. "We need to take extreme action. We need to feel like we can communicate and get across our points as well as theirs."

Young people aged 18 to 38 represent Canada’s largest voting bloc in 151 years, making up 37 per cent of the electorate. Future Majority is hoping to get all, if not a bulk of this group, out to the polls on Oct. 21, having already secured 17,000 vote pledges to date.