Next election could be some time away, predicts Green Leader Elizabeth May 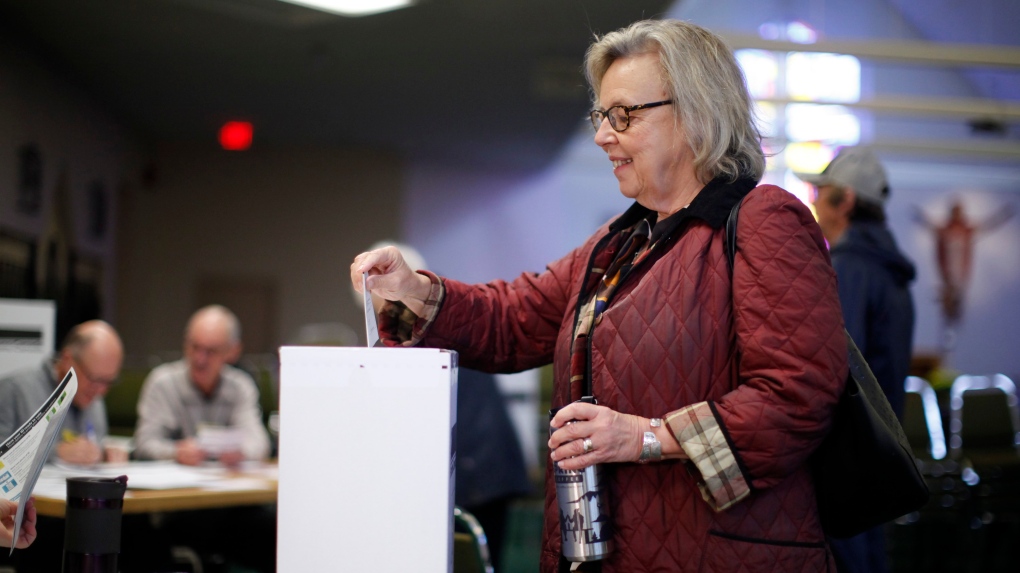 Green Party Leader Elizabeth May casts her vote at St. Elizabeth's Parish while in Sidney, B.C., on Monday, Oct. 21, 2019. THE CANADIAN PRESS/Chad Hipolito

SIDNEY, B.C. -- Elizabeth May isn't expecting another federal election any time soon, but she's already telling Prime Minister Justin Trudeau what will keep the Greens from voting against his government.

May said Thursday she she has written to Trudeau warning the Greens will not support confidence motions if the federal government does not move to increase its climate change targets, currently at 30 per cent below 2005 levels by 2030.

"I wanted to repeat we cannot vote confidence at any point on a confidence motion in a government that fails to have a climate target that's ground in science and consistent with what the Intergovernmental Panel on Climate Change says we must do. That's clear," May told a news conference at her constituency office in Sidney, B.C.

"To improve humanity's chances of survival, it is critical that Canada assume a leadership role, first ramping up our own ambition and then pushing for more ambition overall in global negotiations," says the letter to Trudeau.

May said she had a telephone conversation with the prime minister prior to sending the two-page letter. She said she also sent copies to the leaders of the Conservatives, NDP and Bloc Quebecois, adding that the parties should look for areas of common ground when Parliament resumes.

She suggested politicians should find agreement on banning single-use plastics. May also said the Liberals, NDP and Green platforms all promised improved pharmacare, which could now lead to a commitment to make it universal.

In an earlier interview, May said she believes none of the parties with the political muscle to pull the plug on the coming minority Parliament will be prepared to do so.

The Greens, who return to the House of Commons with three members, fell short of the numbers required to hold the balance of power.

The Conservatives and NDP, meanwhile, need time to get ready for another trip to the polls, May said in the interview. The Conservatives are wrestling with the question of whether Andrew Scheer should remain leader and the New Democrats have to replenish their coffers.

"I doubt very much that the other parties in Parliament will be prepared to go back to the polls, not on principle but purely on the mechanics of another election and them not being ready," May said.

"Things didn't break the way I had thought they might. We would have been the only ones in the House who would be prepared to pull the plug and go to an election over a matter of principle."

Although May, 65, would again lead the Greens in the unlikely event of a snap election, it would not serve the interests of the party to helm another run four years from now, she said.

"I think it's quite unlikely that I'll be the leader of the Green party going into a future election if it's on anything like a four-year timing."

May, who has led the party since 2006, indicated her small caucus -- B.C. MP Paul Manly and newcomer Jenica Atwin of Fredericton -- will have a say in her future.

Regardless, May said, it is "very likely" she will run again in her Vancouver Island riding.

May recalls feeling despondent in 2015 at heading back to the House as the lone Green MP.

"I don't feel crushed today, not at all," she said. "Going back to Parliament as a group of three? We've never had that."

May is also heartened that over 50 Green candidates garnered at least 10 per cent of the vote in their ridings.

"We are now accepted, not in one region but pretty much across Canada, as a viable party. We're positioned in a way that means, quite solidly, we're not going away."

There is potential for Green growth in the Maritimes, particularly in New Brunswick and Prince Edward Island, said Don Desserud, a political science professor at the University of P.E.I.

But the party needs to do a better job of recruiting quality candidates and clearly articulating its overall message, he said.

"The Green party still doesn't have the kind of credibility that you need in order for people to join two things together -- here's the crisis, here's the solution to the crisis.

"It's not that they don't have good policies, but no one believes that they're going to be able to implement those policies because they have such a small presence in the House, and no one expected that to grow considerably."

With files from Jim Bronskill in Ottawa.

This report by The Canadian Press was first published Oct. 24, 2019