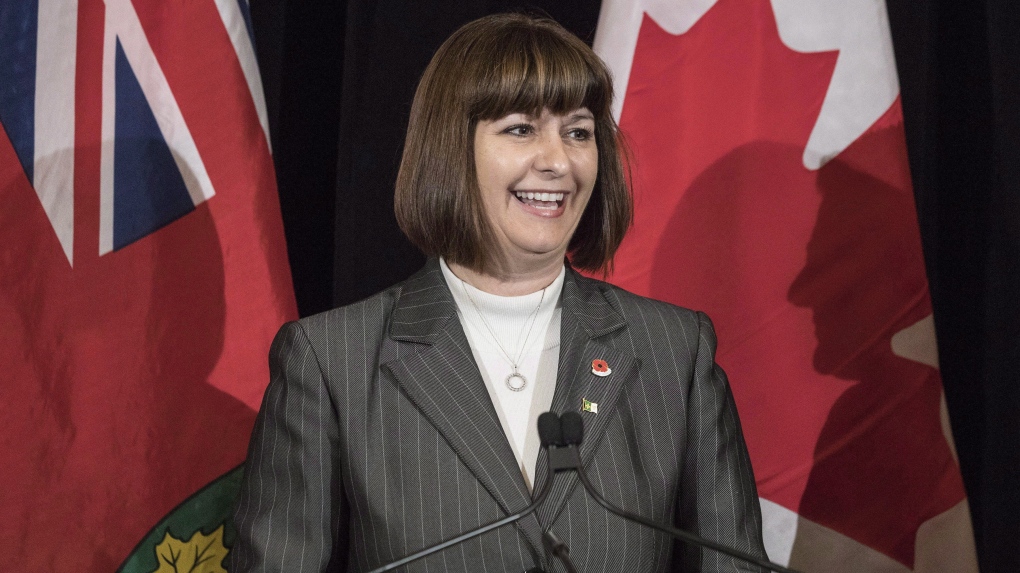 Marie-France Lalonde smiles during a news conference at the Queens Park Legislature in Toronto on Thursday Nov. 1, 2017. (THE CANADIAN PRESS/Chris Young)

OTTAWA -- Ontario's provincial Liberals have lost another legislator after one of their members won the nomination to run for an Ottawa seat in next month's federal election.

Marie-France Lalonde was named late Thursday night as the Liberal Party of Canada candidate for Orleans, the same riding she currently holds provincially.

A spokeswoman said Friday that Lalonde is expected to resign from the provincial legislature, meaning the Ontario Liberals will soon number just five members.

"My campaign begins right now," Lalonde said in a statement. "In the last four months, my team has knocked on thousands of doors."

During her time in government, she served in a number of cabinet roles including francophone affairs minister and correctional services minister.

"It creates more work for us but if you take a look at opinion polls our brand is very strong," he said. "Our work inside the legislature is very important and will be harder but it's ... about defending people's interests."

Premier Doug Ford will now have to call a pair of provincial byelections and Fraser said he believes the party will have a chance to hold both ridings.

Ottawa-Vanier and Orleans have largely been held by the Liberals over the past two decades.

"Those things are never a given," he said. "You've got to go out and do the work every election."

The Ontario Liberal party went from a majority of seats to just seven -- not enough for official party status -- in last year's election that saw the Progressive Conseratives under Ford win a majority.

The defeat was the worst in party history and prompted former premier Kathleen Wynne's resignation, triggering a leadership race.

The new leader will be selected at a party convention on March 7, 2020.

This report by The Canadian Press was first published Sept. 20, 2019.