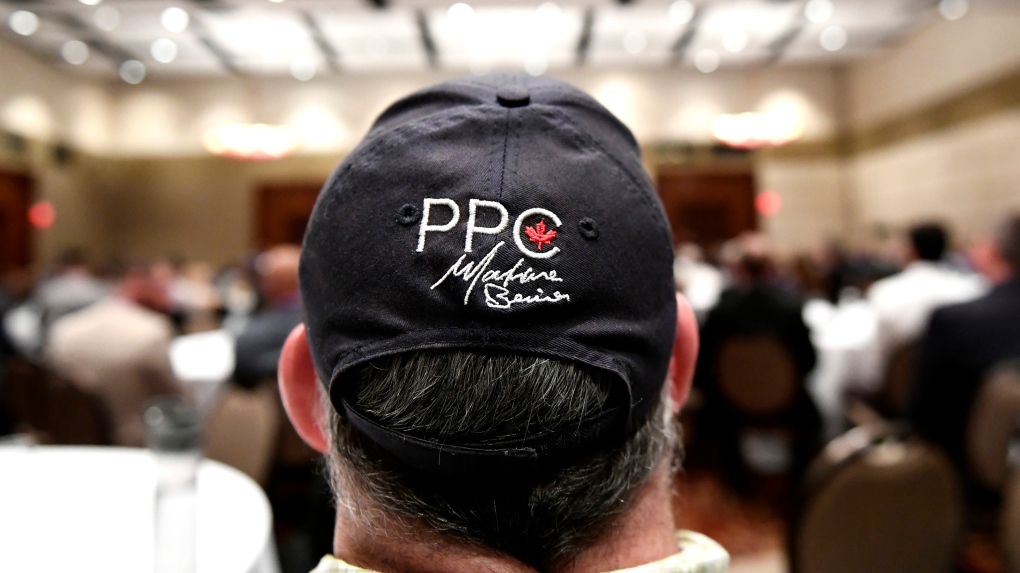 A ballcap with the logo of the People's Party of Canada and signature of leader Maxime Bernier is seen on an attendee during the PPC National Conference in Gatineau, Que. on Sunday, Aug. 18, 2019. (THE CANADIAN PRESS / Justin Tang)

A People's Party of Canada candidate withdrew Monday in Nova Scotia, saying there are divisive and dangerous elements in the party and he doesn't want to be a part of it.

Chad Hudson withdrew his candidacy in West Nova just hours before Elections Canada's deadline for parties to register candidates for the Oct. 21 federal vote, meaning the party will likely fall at least one riding short of its goal of running a full slate.

Hudson informed Elections Canada on Monday morning but didn't speak to the party, simply posting a brief statement on Twitter.

Hudson, who works in the tourism sector, said he wrestled with his decision, but that it came after a "steady drip" of troubling stories and actions from the party and its leader Maxime Bernier.

"(Bernier) has tapped into something very dark and that is very dangerous in this country," Hudson said in an interview.

The party's executive director did not immediately respond to requests for comment.

Among the incidents that Hudson said caused him to withdraw was when Bernier called teenage climate activist Greta Thunberg "mentally unstable" on Twitter. Bernier later walked that back, but Hudson said it showed either that Bernier has poor judgment or that he is listening to "dangerous people" in his inner circle.

"I may not agree with some of her doom-and-gloom predictions ... but she's a very inspiring young woman," Hudson said.

Though Bernier has said he rejects climate change "alarmism," Hudson believes that man-made climate change is real. He was willing to set aside those differences because of his support for the People's Party's economic proposals, such as abolishing corporate welfare.

Hudson said he was also troubled after Bernier stood by a candidate who made racist and transphobic comments for which he later apologized, and after news reports revealed that the former leader of an American neo-Nazi group was among the party's founding members.

"Initially I was really hoping that we could have a new party that could offer people fresh ideas and different perspectives from the establishment parties -- something that is going to offer up actual solutions," Hudson said.

"All of that is outweighed by this other racist garbage, for lack of a better term, that's going on in the back of the store. I can't be a part of that and I have to do my part to call it out."

Hudson said he would offer up more specifics at a later date.

Bernier has denounced "mass immigration" and "extreme multiculturalism," and has promised to dramatically reduce the number of immigrants admitted to Canada, saying the country should look after its own citizens first. He has also vowed to repeal the Canadian Multiculturalism Act and promote Canadian culture and values.

A demonstration outside a Bernier event Sunday night in Hamilton became violent, with four people arrested and later released. Protesters held signs that read, "White supremacy is terrorism" and "Refugees welcome here" as they yelled chants of "Nazi scum, off our streets" at those going inside.

Some tried to stop people from entering the building and at one point blocked the path of an elderly woman who was using a walker, yelling at her and her companion

Please find attached my statement as to why I am no longer standing as a candidate for the #PPC in #WestNova. #cdnpoli #elxn43 pic.twitter.com/exMGn8T2Re

This report by The Canadian Press was first published Sept. 30, 2019.