Reconciliation, Indigenous engagement in question ahead of election 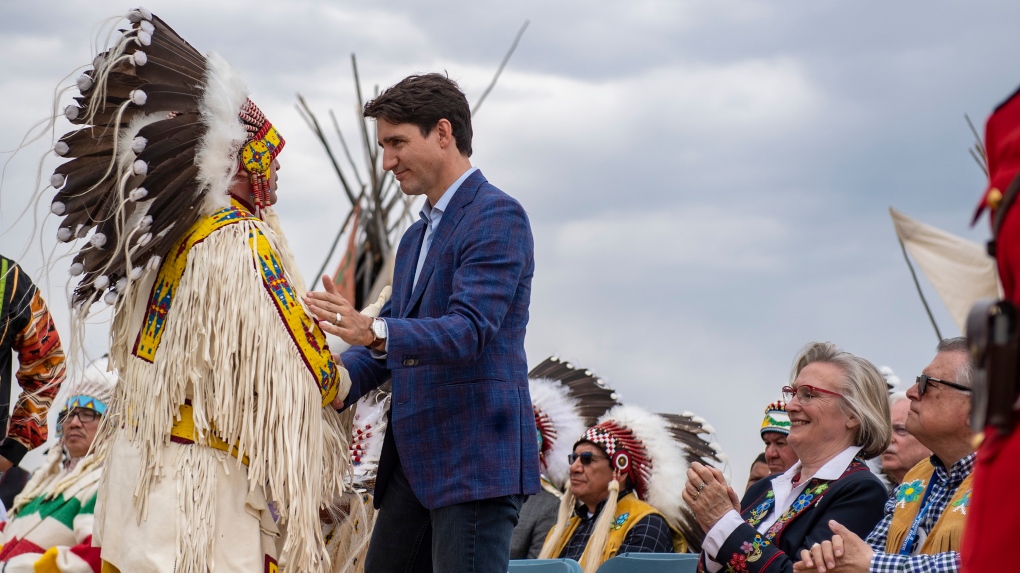 Prime Minister Justin Trudeau shakes hands with Assembly of First Nations Chief Perry Bellegarde during the exoneration for Chief Poundmaker event at a community ceremony at the Chief Poundmaker Historical Centre on the Poundmaker First Nation, Thursday, May 23, 2019. THE CANADIAN PRESS/Liam Richards

Weeks after Justin Trudeau was elected in 2015, he met with three local Indigenous leaders at Vancouver's city hall and received the gift of a carved canoe -- a symbol of a shared journey forward.

Members of the Tsleil-Waututh, Squamish and Musqueam First Nations appeared to find hope in Trudeau's pledge of "sunny ways" and a new "nation-to-nation" relationship with Indigenous communities.

But progress has been slow and some are wondering what the future of reconciliation could look like under the next government.

The same First Nations have since initiated lawsuits against Ottawa over the Trans Mountain pipeline expansion project, including an ongoing appeal by the Squamish and Tsleil-Waututh who argue the federal government failed to meaningfully consult them.

National Chief Perry Bellegarde of the Assembly of First Nations said he's looking for each of the federal parties to work harder to close the gaps facing First Nations communities.

"There is movement -- it is unprecedented -- but, again, progress doesn't mean parity. There's still gaps, so maintaining momentum is key. All parties must maintain momentum," he said.

Bellegarde said he believes the Liberals have done more for Indigenous communities than any other Canadian government, and Trudeau is banking on voters to agree. When it comes to reconciliation, the Liberal campaign rests largely on a pledge to continue fulfilling promises made in 2015, such as implementing the United Nations Declaration on the Rights of Indigenous Peoples, which didn't pass Parliament this spring after Conservative senators dragged out debate.

The NDP and Greens have made similar pledges on UNDRIP, but use stronger language in their platform documents around implementing the Truth and Reconciliation Commissions' 94 Calls to Action, and recognize treaty rights.

The NDP also promises to co-develop a National Action Plan for Reconciliation, and the Greens promise a national strategy for housing, clean water, food security and health care.

Bellegarde said he's heartened by data released by the AFN that shows more Indigenous candidates than ever before at 62, up from 54 in 2015.

The AFN also looked at the number of eligible First Nations voters and the margin of victory in 2015 across the country's 338 ridings to estimate that Indigenous voters could swing almost one in five ridings, including Conservative Leader Andrew Scheer's riding of Regina--Qu'Appelle.

"Getting our people around decision-making tables is key to bring about better policy and legislative change in Canada," Bellegarde said.

Others aren't so optimistic. And many say the priorities that are truly important to First Nations, namely sovereignty and recognition of land rights, aren't cracking the national conversations about Indigenous issues in this election.

Sheila North, former grand chief of the Manitoba Keewatinowi Okimakanak, said she's hearing a lot of Indigenous voters say they either plan to change their vote, or not cast a ballot at all.

"I think a lot of people are catching on that the hope isn't with party politics," North said from Winnipeg.

New money came into her community for programming, including some of the $68 million over three years for First Nation-led health transformation in Manitoba, Ontario and Saskatchewan the unveiled in 2018 at the end of North's term as grand chief.

But North said she's waiting to hear promised recognition of sovereignty, and a relationship with Canada that doesn't involved programs and policies that are "handed down" from Ottawa, before she decides if she'll vote.

"That will really earn my ear and give me a lot of hope," she said.

Squamish Coun. Khelsilem said many platform promises should be considered basic human rights, such as access to clean drinking water, housing and education. And they miss the "real debates" that are happening within Indigenous communities over things like land and title.

Real estate has been the main vehicle for economic development in the Squamish Nation, which is building a major housing development on a parcel of land it recently won back in Vancouver, he said.

The Squamish Nation is not actively encouraging members to vote, but Khelsilem spoke at a rally in support of Jody Wilson-Raybould, Canada's first Indigenous attorney general, who is running as an Independent in Vancouver-Granville after she was ejected from the Liberal caucus over the SNC-Lavalin scandal.

"I think there's something happening among racialized communities," Khelsilem said. "I honestly think Jagmeet is having an impact."

With many projecting a minority government for either the Liberals or Conservatives, Khelsilem said the day after the election could be pivotal for First Nations. He'll be watching to see whether the NDP or Greens include Indigenous issues among their top demands, if either is asked to prop up the winning party.

"I think it will be a true accountability moment," Khelsilem said.

Others take a more radical view. Indigenous policy analyst Russ Diabo said he doesn't believe reconciliation is possible within the existing power structure and that the term has been used rhetorically to keep Indigenous communities down.

Diabo was a founding member of the Liberal party's Aboriginal Peoples Commission in 1990. He left the party in 1996, accusing then-prime minister Jean Chretien of burying the Aboriginal platform and continuing what he described as a "long-standing federal objective of terminating Indigenous rights."

True change and reconciliation can't come from the top down, Diabo said.

"I'm going to look at a post-election strategy of figuring out how we're going to take on whoever forms the next government to advance our right of self-determination and our land rights," he said.

For Joe Alphonse, tribal chief of the Tsilhqot'in National Government in B.C.'s Interior, the Liberals made as much progress as any government could in a single term.

The Tsilhqot'in was the first Indigenous government to have Aboriginal title to its lands recognized by the Supreme Court of Canada in 2014.

Trudeau was the first prime minister to visit the remote territory in 2018 when he exonerated six historic war chiefs who were wrongfully hanging.

"The first thing you do as you move forward is you acknowledge where you've been. This government has done that," Alphonse said.

"Now we can start working out how that relationship is going to look. We've still got a lot of work ahead of us, but we have to be patient and see it through."

This report by The Canadian Press was first published on Oct. 13, 2019.