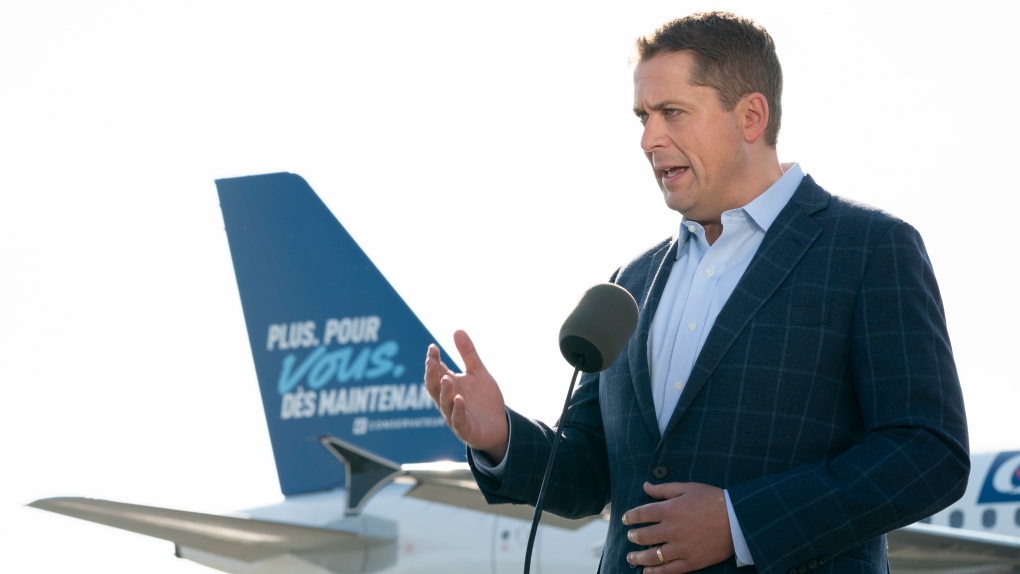 MISSISSAUGA, Ont. -- The federal Conservatives say a university campus recruitment flyer bemoaning "left-wing" professors is just meant to be a funny way to grab the attention of right-leaning students.

The flyers began appearing on at least one Toronto university campus this week, with a picture of leader Andrew Scheer standing in front of a brick wall, a party logo and email address people can use if they want to volunteer.

In large print, the poster reads: "Because you can only hear the same left-wing talking points from your professors so many times."

Scheer said the flyer is not meant to suggest he seeks any kind of influence on whom universities can and cannot hire to teach.

"It's a way to get people engaged on campus and it's meant to be a launching pad for discussions and debate and hearing other points of view," he said.

He said when he was at school he remembers campus Conservative clubs running club recruitment drives saying people should join up to "annoy your professor."

But the poster was not amusing to David Robinson, executive director of the Canadian Association of University Teachers, who called it a "very misplaced and mistaken view" of campuses and said it does a disservice to schools and professors.

"There's a Conservative message going out that somehow colleges and university are these indoctrination centres, that they're more like campuses in Paris in 1968 than they are currently," said Robinson. "They are diverse, certainly schools of business and economics are not overrun by left-wing thinkers or liberal leftists."

Robinson said political parties should be talking about how to fund post-secondary education, student debt, research funding and the role universities and colleges can play to help stop climate change.

Michael Conlon, executive director of the Ontario Confederation of University Faculty Associations, called the flyer "absurd" and said professors are professionals with diverse political views who do not impose those viewpoints on their students.

"I think it's straight out of the Conservative, Doug Ford playbook," said Conlon, referring to the Ontario Tory premier.

Last February, in a letter to his supporters, Ford explained why he was making it optional for university students to pay previously mandatory fees for student groups and activities.

"I think we all know what kind of crazy Marxist nonsense student unions get up to," Ford wrote.

Scheer and Ford have also both professed concern that universities were stifling freedom of speech by barring people with certain viewpoints -- often socially conservative ones on abortion, same-sex marriage or transgender rights. Scheer campaigned for the Conservative leadership pledging to cut federal funding to schools that didn't allow freedom of speech on campus, and after being elected premier in 2018, Ford forced publicly funded Ontario institutions to enact freedom-of-speech policies.

Ford was nowhere to be seen as Scheer criss-crossed the Toronto area campaigning over the first three days of the election, however. Scheer was in Mississauga Friday morning to promise to restore the former Conservative tax credit for public-transit passes, and later campaigned in Etobicoke, which is Ford's home community.

Some political watchers say Ontario voters' growing dislike of Ford's policies is dragging down Scheer's numbers in the province with the most seats.

In Alberta, Premier Jason Kenney has made no secret that he intends to campaign hard to help get Scheer elected, including plans to do so in Ontario which is making Ford's absence from the Scheer campaign effort more noticeable.

Scheer denied making any attempt to distance himself from Ford.

Scheer tried to turn the matter back on the Liberals, and say Justin Trudeau's government has been run by the same people who ran Ontario into deep deficits under the provincial Liberal governments of premiers Dalton McGuinty and Kathleen Wynne.

The transit tax-credit promise is to restore the 15-per-cent tax credit for monthly or annual passes the former Conservative government introduced in 2007. The Liberals cut it in 2017 saying it was ineffective at getting more people to take public transit.

The measure cost about $200 million a year when it was cancelled. The parliamentary budget office says it expects the new version to cost $229 million a year at first, rising to $306 million by 2028-29.

Scheer said it is a measure to make life more affordable, and would save some families that use commuter transit up to $1,000 a year.

"It is also going to make it more attractive to use public transit rather than taking someone's car," he said. "If someone is right on the edge of deciding whether or not it would be more affordable to take public transit, this type of measure will help people make those choices."

Scheer is spending a lot of time in the campaign pushing his middle-class upbringing in comparison to Trudeau's more comfortable life. He turned to the theme again Friday, saying that growing up in Ottawa, he and his sisters had to take the bus everywhere.

"I even had to take the bus on dates, which is not the easiest way to convince someone to go to the movies with you," he said.

With files from Christian Paas-Lang in Ottawa