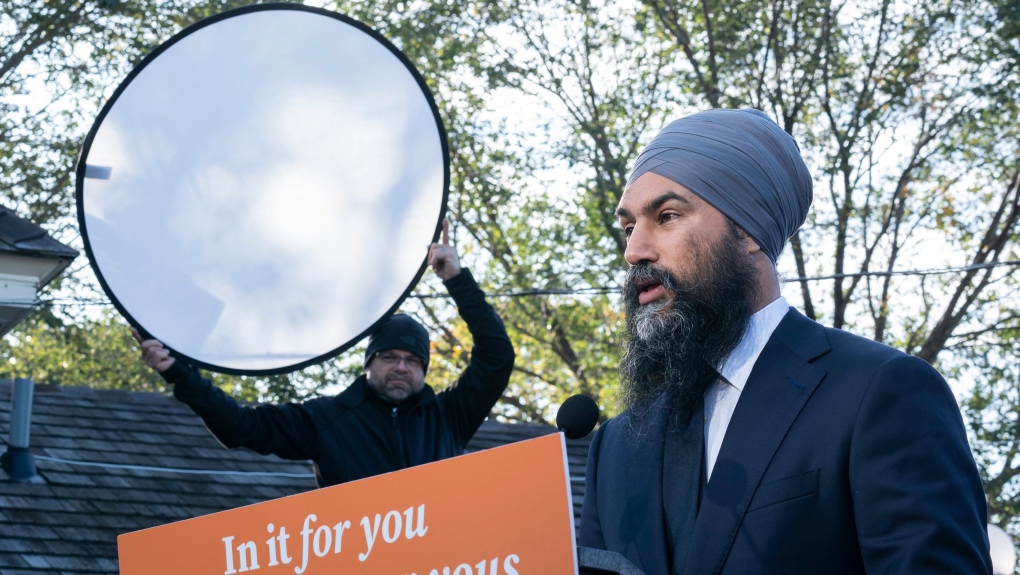 A technician holds up a reflector as NDP Leader Jagmeet Singh responds to questions during a news conference in Ottawa, on Thursday, October 10, 2019. THE CANADIAN PRESS/Paul Chiasson

Singh has already ruled out propping up a minority Conservative government led by Andrew Scheer, so his position on Trans Mountain could be a significant consideration if the Liberals seek to form a government without a majority of seats.

"What do we do with it? It's a complicated question," Singh said Friday after his party released its fiscal plan, showing a $32.7-billion deficit next year and no return to balanced budgets in its forecast.

"I wouldn't have bought it and I'm really clear on that. I definitely don't believe in expanding it, so I'm clear on that. What we do with the asset is something that's kind of confusing."

Singh said he would wait to figure out how much the existing pipeline and its partly planned twinning are worth and what the options are before deciding.

The Liberal government under Justin Trudeau bought the pipeline last year from Kinder Morgan for $4.5 billion after political opposition and regulatory challenges to expanding the existing pipeline between Alberta and the B.C. coast gave the company and its investors cold feet.

Finance Minister Bill Morneau has said the plan was to buy the pipeline, get past all the hurdles, and then sell it to a private backer. The Liberals say they would invest any money from the expansion project, both corporate income-tax revenues and profit from the sale, into fighting climate change.

Singh said he could not commit to a path of action on Trans Mountain before having more information, but that he wants all public proceeds to go to clean and renewable energy.

"Mr. Trudeau made a mistake and he bought something and so we've got to figure out what we do moving forward," Singh said. "I need to be in government to figure that out."

Singh has taken flak from within his party over his stance on a different pipeline for liquefied natural gas in northern British Columbia. He has supported the LNG Canada project, defending it by saying the owners consulted well with Indigenous communities and that B.C., whose NDP government supports the project, has one of the best climate plans in the country.

The NDP released its platform costing Friday, in the home stretch of the election campaign. It shows $35 billion in planned new spending next year and $30.5 billion in expected new revenues.

The plan shows many new investments would be front-loaded in the first year of an NDP government, as the projected deficit falls to $18 billion in the second year, then sits at around $16.5 billion for the remaining two years.

Singh defended keeping the books in the red.

"A lot of times when people hear 'balanced budgets,' they hear austerity and they hear cutting their services -- and I don't believe in that," he said.

"I do believe in being prudent and I believe people want us to live within our means. That's why we are talking about increased revenues to be able to pay for our investments."

The party said its plan would still see the country's debt-to-GDP ratio fall over the four-year time period.

Former parliamentary budget officer Kevin Page's Institute of Fiscal Studies and Democracy at the University of Ottawa gave the NDP costing a "pass" on economic assumptions and responsible fiscal management, but a "fail" on transparency because of the late date on which it was released. Advanced polls opened Friday.

The largest new spending promises include $10 billion for pharmacare, another $1.9 billion for dental care -- which would fall to about $830 million annually after the first year -- and $5 billion for building new affordable homes. The plan also includes $1.8 billion for ending water advisories for Indigenous communities.

Having "head-to-toe" health coverage is the NDP's aspirational goal, Singh said, but it is not yet costed out or included in the plan. Singh said he hopes that introducing pharmacare will ultimately save the health system some money, which could then be put back into coverage for vision care, hearing care and mental-health services.

Other new spending would include $1 billion in the first year to work toward universal child care, with the cost rising by $1 billion each year, $1.5 billion for green transit and transportation spending, and $1.5 billion for First Nations housing and infrastructure.

This report by the Canadian Press was first published on Oct. 11, 2019.