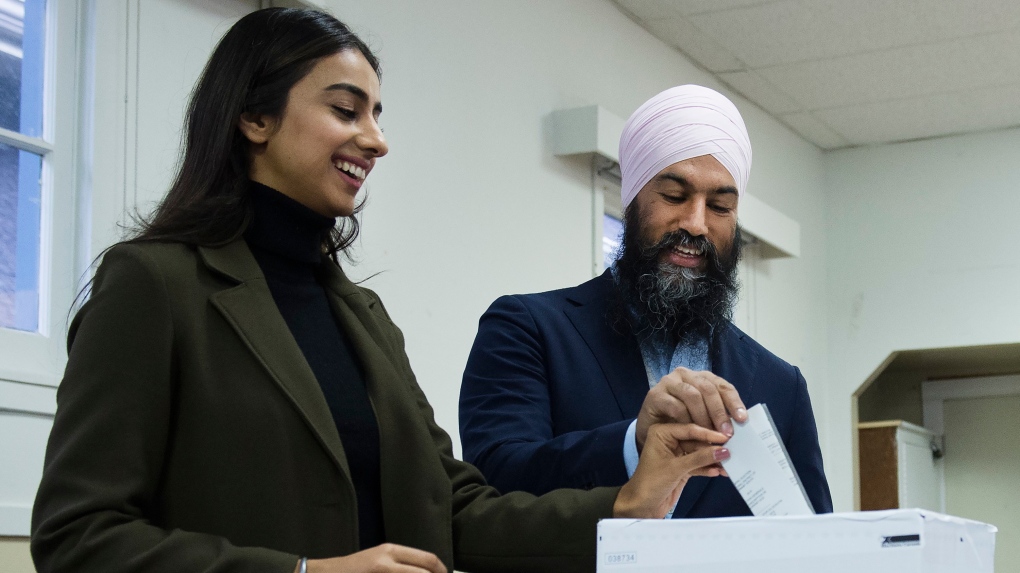 NDP leader Jagmeet Singh, right, and his wife Gurkiran Kaur, left, cast their ballets at an advanced polling station in his Burnaby South riding during a campaign stop in Burnaby, B.C., on Sunday, October 13, 2019. THE CANADIAN PRESS/Nathan Denette

SURREY, B.C. -- NDP Leader Jagmeet Singh tried to strike a precarious balance Sunday between his opposition to the Trans Mountain pipeline and the mounting possibility of a coalition with Justin Trudeau's Liberals.

Singh is drawing a firm line that he will do whatever it takes -- including a possible coalition with the Liberals -- to keep the Conservatives from forming a government.

"I am firmly opposed to the pipeline. I've been opposed to it. I will continue to fight against it and it's absolutely one of my priorities," Singh told a crowd of supporters in Surrey B.C.

"I won't negotiate a future government right now, but I will tell people what my priorities are and absolutely my priority is to fight that pipeline."

Singh offered a first glimpse of the possibility of leaving the door open to working with the Liberals -- in spite of his strong stance against the pipeline -- following the French debate earlier this week. He told reporters Thursday that since the Liberals had already purchased the pipeline, he would "work on ensuring that we are as responsible as possible with moving forward with an asset that I would not have bought."

Singh is also walking a political tightrope when it comes to where he currently stands on liquefied natural gas (LNG) development in B.C.

A single protester disrupted the beginning of his rally Sunday in Surrey, B.C., shouting obscenities at the NDP leader and voicing his opposition to the $40 billion LNG project in northern British Columbia.

The project will see LNG Canada export natural gas obtained by fracking. It has the support of the provincial NDP government in B.C.

In January, Singh voiced support for the project, but several months later in May, a week after the NDP lost their Nanaimo-Ladysmith seat to the Greens in the byelection, he came out against fracking -- a stance which he repeated Sunday.

When asked where he now stands on the LNG project Sunday, Singh sidestepped the question, saying only that he supports the B.C. government's plans to reduce emissions as the "most ambitious climate action plan in North America."

Singh was far less ambiguous about his plans to stop Conservative Leader Andrew Scheer from forming a government.

He also spent much of Sunday trying dissuade Canadians from voting strategically with a message that encourages voters not to settle for less, but instead to "dream big."

The New Democratic leader is trying to counter a message from the Liberals that they are the only real option for progressive voters, as they have a better shot at forming government.

The Liberal push comes as the NDP has started to see its fortunes rise.

Several polls released over the last week suggest the New Democratic party has been gaining support, rising from around 11 per cent of decided voter support at the beginning of the campaign to between 18 to 20 per cent in recent days.

But, with the party still in third place and the Liberals and Conservatives deadlocked in a statistical tie, the Liberals have spent much of the election campaign warning progressive voters against voting for the NDP or Greens and to instead cast their ballots for the Liberals to prevent the Conservatives from forming government.

Singh made it clear his ultimate goal is not to be kingmaker in a minority government.

"I want to become prime minister," he said earlier in the day in his home riding of Burnaby South.

Singh voted at an advance poll Sunday in his riding, where he joked that it was a tough choice but he "went with Mr. Singh."

His wife, Gurkiran Kaur, accompanied him to the voting station. While she was about to cast her vote alongside Singh, she took one last look at her ballot.

"Let me just double check," she said unfolded her ballot to take a peek.

Kaur and Singh both laughed and cast their ballots together.