Some disabled Canadians feeling left out of discussion during election campaign 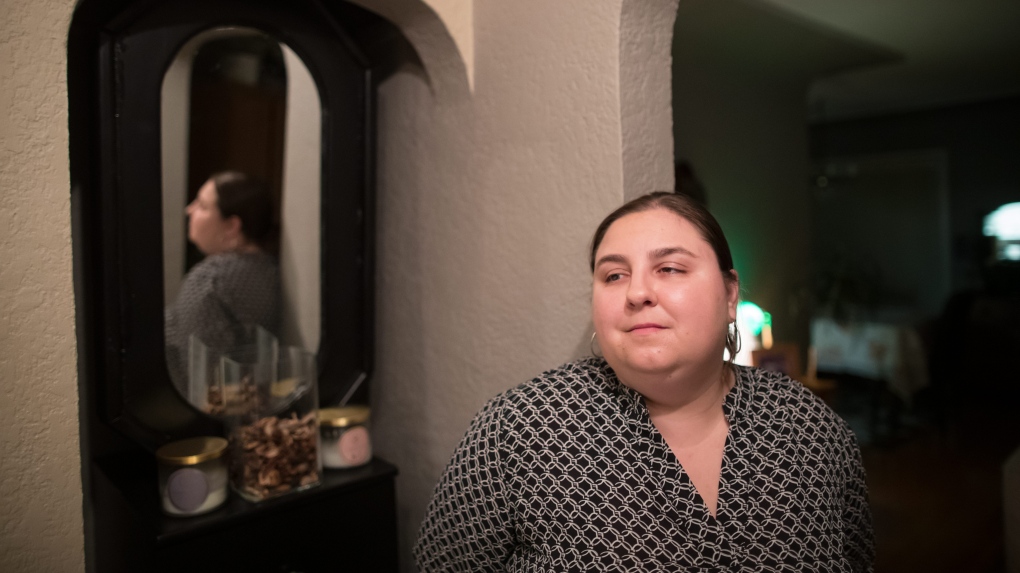 Amy Amantea, who lost her eyesight due to complications while undergoing surgery more than a decade ago, poses for a photograph at her home in North Vancouver, on Friday October 11, 2019. THE CANADIAN PRESS/Darryl Dyck

Amy Amantea tuned in to the English-language federal leaders' debate with modest hope there would be at least some discussion of issues relevant to disabled Canadians.

The first half of the campaign had passed with barely a reference, even from the party that had delivered a historic achievement in national disability policy. Earlier this year, the Liberals made good on a 2015 campaign promise when the Accessible Canada Act received royal assent, marking the first time any government had enacted accessibility legislation at the federal level.

The government estimates one in five Canadians over the age of 15 is disabled, and Amantea, who is legally blind, hoped leaders would use the Oct. 7 debate to address some of the many issues they face. But those hopes faded as the debate progressed, giving way instead to doubts about how Canada's disabled residents would fare after the Oct. 21 election.

"We have a lot of very unique needs and circumstances in our community that don't get addressed," Amantea said in a telephone interview from Vancouver. "Just a nod, just a mention would have been kind of nice, but it was not to be."

Amantea said that relative silence has persisted into the final week of the campaign, giving rise to concerns throughout Canada's disabled community. Many fear that parties who fail to make mention of key issues facing disabled Canadians while courting votes may prove even more dismissive once those votes have been cast.

They point to party platforms and public pledges, most of which make scant mention of either the Accessible Canada Act or disability-specific measures on issues such as infrastructure, health and affordable housing.

On Tuesday, the Liberals released a "disability equity statement," largely focused on things the party has done in power in the last four years, such as promoting workplace accessibility and committing to hiring 5,000 people with disabilities for the public service.

But it also talks about funding workplace accessibility in the private sector and "timely and ambitious implementation of the Accessible Canada Act." Financial independence through paid employment is critical to full social participation, the statement says.

The Green party did not respond to request for comment, and the People's Party of Canada said its platform contained "no policy related to disabled persons."

The NDP did not provide comment to The Canadian Press, but made several commitments to strengthen the Accessible Canada Act in a letter sent to an Ontario-based disability advocacy group.

The act, while widely acknowledged as a significant milestone, was also broadly criticized by nearly a hundred grass-roots organizations across the country as too weak to be truly effective. Such critiques continued even after the government agreed to adopt some Senate amendments sought by the disability groups, who hoped future governments would continue to build on the new law.

Only the NDP agreed to do so when approached by the Accessibility for Ontarians with Disabilities Act Alliance, which contacted all major parties in July.

"The Liberals hailed this bill as a historical piece of legislation. But without substantial amendments, it is yet another in a long line of Liberal half-measures," reads the NDP's response. "New Democrats are committed to ensuring that C-81 actually lives up to Liberal party rhetoric."

The Conservatives, too, pledged to "work closely with the disability community to ensure that our laws reflect their lived realities." Spokesman Simon Jefferies also noted party members pushed to strengthen the act but saw their amendments voted down by the government.

The vagueness of these commitments troubles Gabrielle Peters, a wheelchair-user and writer.

"Canada's approach to accessibility has been to grant it as a gift they give us rather than a right we deserve," Peters said. "Now that we have the ACA, the concern is that the broader public and the government think the issue is resolved when this law is, at best, a beginning."

Other disabled voters expressed concerns about the handful of relevant promises that have been put forward on the campaign trail. In addition to pledging expanded eligibility for the disability tax credit, the Conservatives have said they would implement a $50-million national autism strategy focusing on research and services for children. The NDP and Greens have followed suit with similar proposals and larger pots of cash.

While widely lauded among parent-led advocacy groups, some autistic adults view the proposals with skepticism.

Alex Haagaard, who is autistic and uses a wheelchair, said that while much modern disability policy including the ACA tends to apply a social lens, discussion of autism is still framed through the outmoded medical model that positions the disability as an ailment to be cured rather than a part of a person's identity.

Haagaard said action is clearly needed to help parents seeking supports for their children and teachers working to integrate autistic students into their classrooms, but said current attitudes at the heart of the campaign rhetoric are troubling.

"That is counter to the goals of disability justice to silo autism as this individual condition that warrants this level of attention compared to other disabilities," Haagaard said.

Like Amantea, Peters felt let down by the leaders debates, citing the prevalence of discussion around medical assistance in dying over other issues that affect disabled people. The subject is polarizing, with many advocacy groups and individuals asserting such legislation devalues the lives of disabled people and places them at greater risk.

Such a narrow focus, Peters said, shows all parties' failure to reckon with or address the diverse, complex needs of an overlooked demographic.

"What strikes me as missing in policy and in this election is us," she said. "Disabled people. The not inspirational, not motivational, not middle class, not white, disabled people of this country. In other words -- most of us."

This report by The Canadian Press was first published on Oct. 15, 2019.