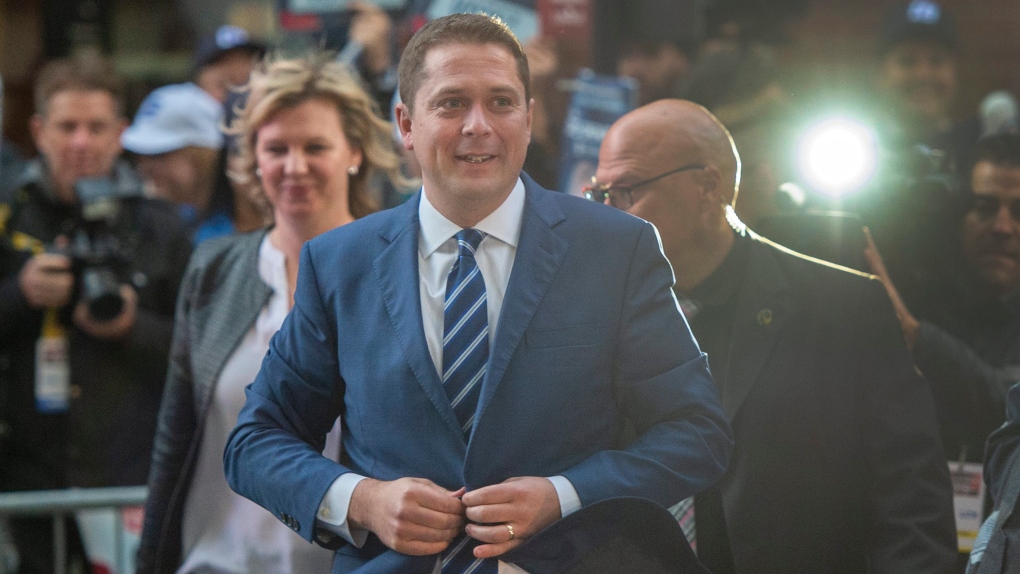 Before Thursday, at least nine of the Conservatives' main election policy promises involve offering Canadians a tax credit or cutting an existing tax.

Moreover, three of those tax credit proposals were throwbacks to the time of Stephen Harper's Conservative government, and were taken away by Justin Trudeau during the Liberal leader's past four years as prime minister.

On a sunny Thursday morning in southern New Brunswick, Scheer promised an expansion of yet another tax credit, this time for the supplies of volunteer search-and-rescue workers and firefighters. And once again, the measure was first introduced during the Harper era.

Scheer rejected the notion his vision for the Conservative movement is simply to rehash old policy ideas from past Tory administrations.

"Our platform...is full of exciting and innovative ideas," said Scheer, standing in front of a line of firefighters at the Upper Kingsclear Fire Department, which is staffed entirely by volunteers.

He pointed to his party's "green patent tax credit," which he announced before the election kicked off. The proposal would reduce the taxes of companies that develop green technology patents in Canada.

And then he brought up his party's pledge to cut the tax rate on income under $47,630, from 15 per cent to 13.75 per cent. "Our universal tax cut is an innovative way, is a comprehensive tax cut that applies to every single Canadian taxpayer," he said.

He too said the new and innovative ideas of the conservative movement are simply the "fundamentals" of conservative philosophy. What's unfortunate, Higgs said, is that during election campaigns, those ideas often get forgotten in order "to buy votes."

"When I was running, it was like, well, you got to promise this and you have to promise that and the other thing," the premier told reporters following Scheer's announcement, about his 2018 election campaign.

"And I said no, I'm promising to deliver results for the money that's already been spent."

Higgs said Scheer's environment plan -- with the patent tax credit -- is a clear example of an innovative idea that is based in traditional conservative thought.

"What Andrew Scheer is proposing is to let the emitters pay for research and development," he said.

"We're going to let them create that Kodak moment -- (like) when all of a sudden digital photography takes over because the technology allows us to do so."

And until the private sector can come up with the technology to help Canadians drastically reduce carbon emissions, "let's use what we have," Higgs said, referring to fossil fuels.

Thursday's tax credit announcement lowers the number of service hours required for volunteer firefighters to qualify for the program.

Right now, volunteers must work 200 hours a year to access the credit, and the Conservatives are pledging to lower that to 150.

"Communities across Canada rely on volunteers for essential services like fire protection and search and rescue," Scheer said. "These are people of courage, character, and strength who step up when their neighbours need it most, often at significant personal expense."

A report released last year by the American-based National Fire Protection Association estimated that between 2014-2016, 83 per cent of Canada's firefighters were volunteers.

The Search and Rescue Volunteer Association of Canada says 9,000 volunteers serve on 300 teams across the country.

Upper Kingsclear is in the riding of New Brunswick Southwest, a longtime Conservative stronghold that fell to the Liberals in the 2015 campaign as a red wave washed over the Atlantic provinces.

The Conservative candidate there this election is former MP John Williamson. In 2015, he was forced to apologize after reportedly saying it made no sense to pay "whities" to stay home while companies bring in "brown people" as part of the temporary foreign worker program.