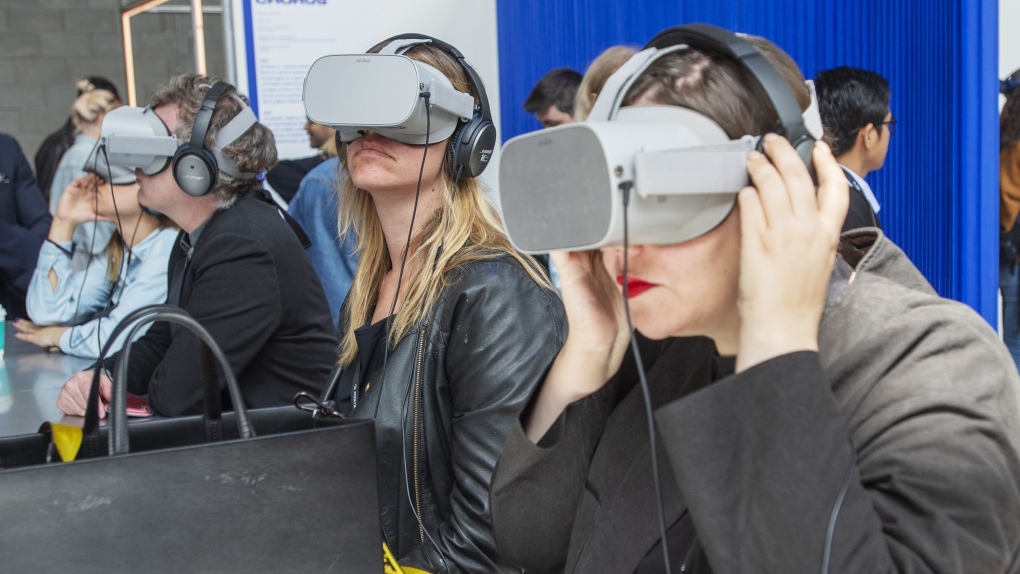 Participants check out the virtual reality display at the C2 technology conference Wednesday, May 22, 2019 in Montreal. THE CANADIAN PRESS/Ryan Remiorz

OTTAWA – More than a hundred top tech executives in Canada have added their names to a formal letter addressed to the leaders of the four major political parties, urging them to prioritize the industry’s needs this election campaign.

Under the banner of the Council of Canadian Innovators (CCI), the CEOs from 110 companies, ranging from small to more established organizations, say Canada’s “productivity is lagging and our future economic prosperity is at risk.”

Executive Director of the CCI, Benjamin Bergen, says the letter was formed out of frustration with a lack of action on policies that would enhance Canadian-driven innovation.

“It’s business leaders and innovators really saying to the political parties: ‘work with us to build an innovation ecosystem where we can prosper and be successful,’” said Bergen.

“Canada has been struggling in this productivity gap and if we want to pay for the social programs we care about, regardless of how you divide it right, left, or centre we have to make sure we’re participating in wealth creation.”

The letter specifically asks the political leaders to address shortages of “skilled talent, growth capital, and new customers” – three requests that the CCI has advocated for since its inception after the 2015 election.

The bid for more skilled talent is two-fold: It includes creating better incentives for highly skilled workers who have been educated in Canada to find work domestically, as opposed to venturing south of the border where the wages can be higher, while also reducing barriers that prohibit international workers from settling in Canada.

The Liberal government during its mandate piloted the Global Talent Stream, which reduces the waiting time for certain foreign skilled workers’ visa applications from several months to 10 days. In their 2019 budget, they promised to make this program permanent.

The other parties have not yet indicated during the election campaign whether they would implement a similar initiative.

The CEO of clean tech company Terramera, Karn Manhas, says the program has “transformed” his company.

“If talent is in competition everywhere in the world and you say ‘we want to hire you but it’s going to take us six to nine months to figure out the paperwork,’ they’re going go somewhere else,” said Manhas in an interview with CTVNews.ca.

Despite this, he said his company has over 70 positions unoccupied right now – positions that aren’t necessarily being trained for in Canada.

“If you can bring that expertise here, then you can grow that talent in Canada,” said Manhas.

They’re also requesting increased access to funds – venture capital or otherwise – to help scale their companies. This involves, in large part, a culture shift whereby investors, including the government, are open to shouldering greater risk knowing the rewards could be more advantageous.

It also requires an acknowledgment of the risk that entrepreneurs have taken to build a made-in-Canada company, says Clara Angotti, president and founder of NextPathway, a Toronto-based big data company.

“It’s important for the government to realize there are real people and real families that are directly impacted by their decisions,” said Angotti. “These are companies that have devoted their professional career to living in Canada, being educated here. Our business employees 200 people.”

Beyond the personal impact, Angotti is looking for more financial security and a tax break for scaling companies.

“I’m asking to be able to keep more of the money I’ve earned,” said Angotti. “I want to be able to recoup some of that time and energy so that I know that if things don’t go so well or if I have to invest over the next three years before I can bring something to commercialization, I’m safe.”

The alternative, she said, is to sell early and more often than not to an American investor. She said that contributes to a vicious cycle whereby Canada doesn’t capitalize on its intellectual property.

She added that the few tax measures that are in place like SR&ED, a program that compensates entrepreneurs who conduct research and development in Canada, “are some of the only vehicles by which as an entrepreneur we can put some money aside for the day we retire.”

And while there are a variety of additional measures they’d like to see promised, such as encouraging equity and stock options for employees, theyCEOs also prioritizing greater market access.  This involves promoting Canadian product and invention elsewhere, or what Manhas refers to as sparking a “lightning rod” abroad.

It also includes focusing on Canada’s own market. As Angotti points out, there is no mandate that the government be required to prioritize Canadian-based pitches when putting a call out for request for proposals on big projects.

She said she feels the last four years the Liberals have been stagnant in advancing policies that would benefit small to medium-sized companies.

“They forgot that the small businesses in Canada contribute significantly to the GDP. They lost their way and they let us down,” said Angotti.

Liberal Leader Justin Trudeau was asked about his party’s track record on innovation on the campaign trail on Friday in Quebec. He touted his government’s work with the Business Development Bank of Canada to ensure more readily available resources for entrepreneurs.

“We’ve made sure that advice and services are accessible free of charge,” he said. “We’ve done an awful lot over the past four years but we fully recognize there’s more to do. It’s not time to go back to the kind of cuts and austerity that the Conservatives always propose.”

Meanwhile, Conservative Leader Andrew Scheer was pressed on whether he’s had conversations with Canadian entrepreneurs about what his party would do for innovation if elected on Oct. 21.

“They’re often very frustrated that Justin Trudeau seems to be focused on the big giant international companies while ignoring the great stories that we have here at home,” he said. “And so our innovation agenda will absolutely help foster startups and scale-ups here in Canada.”

Without providing specifics, he said one of the ways his party will do this isby off-loading regulatory burdens to growth and competitiveness.

“Canada has a huge opportunity to really build its economy beyond the value that we have depended on from the resources sector,” said Manhas.

“This needs to be the top, the most important [election] issue.”