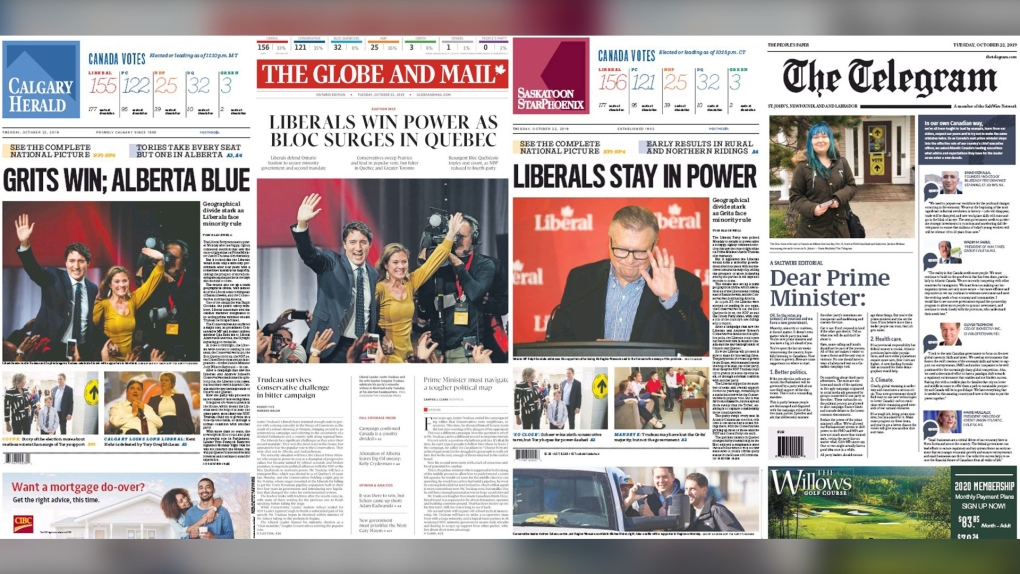 After Prime Minister Justin Trudeau held on to power with a minority government on Monday night, Canadians woke up to very different front pages depending on the newspaper they were reading.

TORONTO – After Prime Minister Justin Trudeau held on to power with a minority government on Monday night, Canadians woke up to very different front pages depending on the newspaper they were reading.

The Globe and Mail featured an image of a jubilant Trudeau and his wife Sophie Gregoire-Trudeau waving to a crowd of supporters at his Montreal headquarters after the results came in. The newspaper’s headline announced in large black lettering: “Liberals win power as Bloc surges in Quebec.”

The right-leaning The National Post took a somewhat different tone in its chosen cover. The newspaper published a cartoon depicting Trudeau and NDP Leader Jagmeet Singh standing beside each other with their hands up in victory. A conversation bubble coming from Singh’s character included the words “I won!”

Beneath the drawing, the headline read: “Liberal minority puts NDP in driver’s seat.”

The Conservative newspaper The Toronto Sun was even more critical of the Liberal victory with its front page. The publication showed a full-page image of Trudeau looking ecstatic in the middle of a crowd with the large text: “Kiss my Grits.” An accompanying sub-headline read: “Liberals squeeze out minority win.”

On the East Coast, The Telegram newspaper in St. John’s, N.L. took an entirely different approach with its front page. The province’s largest daily newspaper published a photo of a female voter as its top image.

Below the image, the paper included an editorial with the headline “Dear Prime Minister” and a list of three recommendations on how Trudeau should begin his second term in office.

In Quebec, Le Journal de Montreal featured a composite photo of Bloc Quebecois Leader Yves-Francois Blanchet holding a cell phone and facing a smiling Trudeau. Below the image, a smaller headline: “Quebec sends a message to Trudeau” with the large text “Minority” beneath it.

The Ottawa Citizen newspaper took a different route and published a photo of Trudeau sitting around with his family in a hotel room watching the election night results come in. The accompanying headline simply read: “Liberals stay in power.”

As expected, some of the front pages in Western Canada differed significantly from their Eastern counterparts.

The Calgary Sun, for example, published a cartoon portraying a sallow-faced Trudeau with dark eyes flying on a broomstick with bats flying around him and the large headline: “Welcome to our nightmare.”

On the flip side, the Calgary Herald was much more subdued in its coverage of the election’s results. The newspaper featured a photo of Trudeau and his wife smiling and waving with the simple headline: “Grits win; Alberta blue.”

In Saskatchewan, the Saskatoon StarPhoenix, which is owned by the same company that owns the Ottawa Citizen, Postmedia Network, published the same headline as the Ottawa newspaper “Liberals stay in power.”

However, StarPhoenix chose to feature a photo of high-profile Liberal MP and cabinet minister Ralph Goodale waving with his head bowed. The longtime politician lost his riding of Regina-Wascana to a Conservative after representing it for 26 years.

British Columbia’s daily newspaper The Province published a large photo of Trudeau smiling as he walked through a crowd on election night.

The publication’s headline read: “Minority rules” with a sub-headline that stated: “Justin Trudeau lost his majority, but with the most seats in the new House of Commons, he gets the first shot at forming a minority government.”