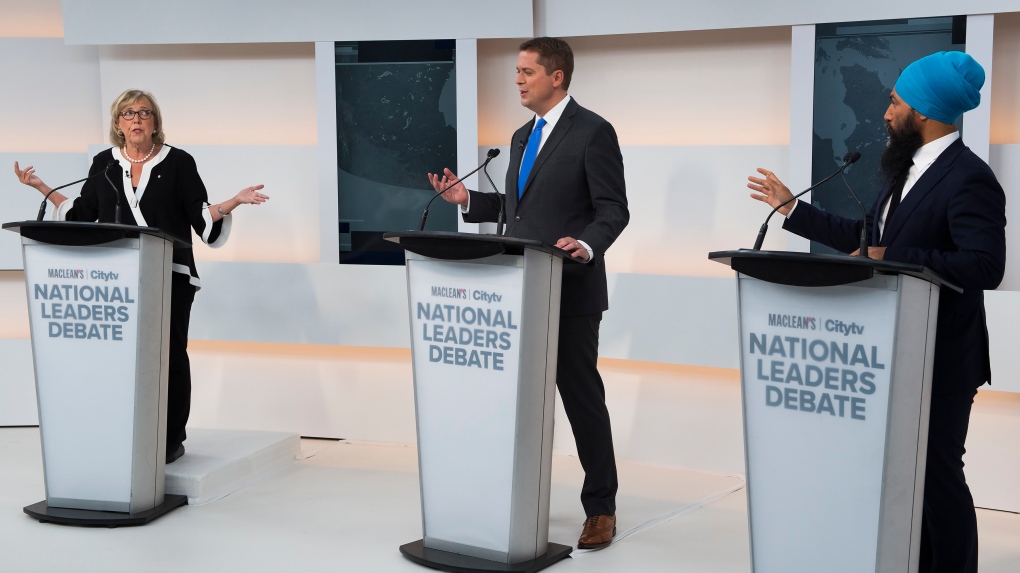 OTTAWA -- Liberal Leader Justin Trudeau skipped the Maclean's/Citytv debate Thursday night, the first of the federal election campaign, but his three main rivals took swings at his record and each other.

The Canadian Press Baloney Meter, which is a dispassionate examination of political statements culminating in a ranking of accuracy on a scale of "no baloney" to "full of baloney," reveals some of the misleading things they said.

"We look at some of the decisions that (Liberal Leader Justin Trudeau) has made over the past year. He gave $14 billion away to the wealthiest corporations so they could buy corporate jets and limousines. He bought a pipeline for $4.5 billion. That's almost $20 billion that he committed to the wealthiest and the most powerful. We'd make different choices."

Last November, the Liberal government unveiled a plan to help Canada compete with the United States for investment dollars.

It includes changes that would allow businesses to immediately write off the full costs of some types of equipment and machinery, as well as allow companies of all sizes, and across all sectors, to expense a larger share of new assets.

The measures, as mentioned in the 2018 fall economic statement, are expected to lower federal revenues by about $14 billion by 2024.

Christopher Ragan, an associate professor of economics at McGill University, said Singh was being misleading when he said only the rich benefit.

"There is a lot of empirical evidence across countries and across time that when you stimulate investments ... the benefit of the investment flows through to greater employment, higher wages, higher productivity," said Ragan.

"It's not just about private jets and limousines," he said. "It's about driving investment in the economy, which drives growth and drives productivity."

The second part of the statement is about how the Liberal government bought the Trans Mountain pipeline project from Kinder Morgan, after political opposition to expanding the existing pipeline between Alberta and the B.C. coast gave the company and its investors cold feet.

Trevor Tombe, an associate professor of economics at the University of Calgary, said the pipeline, if and when it is built, would shrink the difference in the price of oil from Alberta versus oil from elsewhere in the world -- a gap that is caused by transportation costs.

Shipping the oil by rail is more expensive than by pipeline and reduces the price Alberta's oil can command.

"That matters, because it affects revenue to the businesses, of course, which affects their willingness to invest, which affects employment and oil production in Canada," Tombe said.

It is fair for Singh to say he would make different choices about how to use federal revenues as prime minister.

It was misleading of him to characterize the corporate tax changes and the pipeline purchase as a handout to the wealthy and powerful without acknowledging how ordinary Canadians might benefit, too.

"(Justin Trudeau's) carbon tax has not put a price on pollution. It has given a massive exemption to the country's largest emitters. Large emitters can receive an exemption of up to 90 per cent of the carbon tax, but hard-working individuals pay the full cost, as do small and medium-sized businesses."

The federal Liberal government imposed a levy of $20 per tonne of carbon-dioxide emissions in New Brunswick, Ontario, Manitoba and Saskatchewan on April 1 because none of the provinces had carbon-pricing systems of their own. Ottawa said it would impose one on Alberta beginning Jan. 1, 2020 after a new conservative government repealed that province's system.

There is an exemption for some emitters, but Ragan, the economist from McGill University, said that is really part of an output-based pricing system that was designed to help keep Canadian companies competitive under this carbon-pricing regime.

"It's trying to price carbon emissions without driving firms out of business," he said. "So basically what it says is you have to pay for your carbon emissions, but we're also going to effectively subsidize your output -- not of carbon, but of steel or pulp and paper and whatever."

Ragan, who is also chair of Canada's Ecofiscal Commission, noted Scheer did not mention the tax rebates that Canadians are getting.

Legislation requires 90 per cent of the revenues raised through the carbon tax be returned to individuals, through a tax credit that varies by province because the amount of carbon tax people pay depends on where they live. People can cut the amount of tax they owe by shifting to lower-emissions lifestyles but their rebates stay the same.

"Canadians face the higher prices caused by the carbon tax, but they get a proverbial cheque in the mail," Ragan said.

"If you wanted to come up with something creative ... It would have to be up to a judge to say, 'I'd like to order this company to do community service, do the work that needs to be done, maybe in transportation infrastructure in the downtown' ... Someone has to pay to do that work, why not make SNC-Lavalin do it? But no profit."

Green Leader Elizabeth May raised eyebrows earlier this summer when she suggested that, if SNC-Lavalin were found guilty of the corruption charges it is facing, the government could order the Montreal engineering giant to perform community service by building infrastructure to bring safe drinking water to First Nations communities that are under boil-water advisories.

She was asked about it during the debate and she said that it would be up to a judge to decide, but she still thinks it could be a good idea.

Carissima Mathen, a University of Ottawa law professor, does not think any judge could order such an arrangement.

"It's extremely unusual to have a punishment directed at the betterment of a completely unrelated third party, as opposed to, say, restitution of a victim," Mathen said. "Secondly, any court would be wary of intruding into what is a core government function: building and repairing infrastructure."

Mathen also said that the Corruption of Foreign Public Officials Act, which says anyone convicted under the law can be sentenced to prison for up to 14 years, does not offer the kind of discretion that would be needed to do what May is proposing.

"A court can impose a conditional sentence to be served in a community, but that is in lieu of imprisonment and so applies to natural persons," Mathen said -- to humans, that means, not to corporate entities. "This proposal is clearly framed at the organization. So I don't see this as feasible."

The verdict: "Full of baloney" -- the statement is completely inaccurate