Tories make gains in B.C. while Grits lose ground and NDP fails to break through 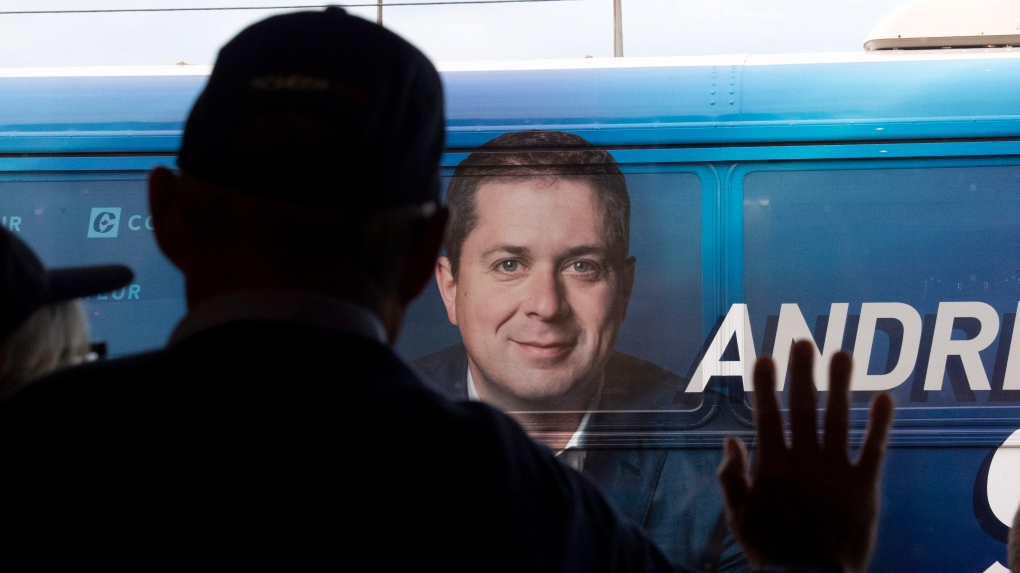 In this Oct. 16, 2019, file photo, a supporter leans on a window as Conservative leader Andrew Scheer's bus arrives at a campaign stop in Hamilton, Ontario. (Adrian Wyld/THE CANADIAN PRESS)

VANCOUVER -- The Liberal wave that swept British Columbia's Lower Mainland four years ago has been partly washed away, with the Conservatives snatching back multiple ridings while anger over the Trans Mountain pipeline expansion failed to secure the New Democrats any new seats.

Justin Trudeau's Liberal party won a number of surprise seats in Metro Vancouver and the Fraser Valley in 2015, several of which switched back to long-standing Tory alliances in Monday's federal election. Ridings in Surrey, Richmond, Langley, Mission and Maple Ridge booted out Grits in favour of Conservatives.

"The results clipped the wings of the Liberal party," said Max Cameron, a political science professor at the University of British Columbia. "Back in 2015, there were a lot of voters who were keen to end the (Stephen) Harper government and voted strategically. Many of those supporters have gone back to their roots."

The Conservatives won 17 seats in the province and the NDP and Liberals tied at 11 each. The Greens won two seats.

In Burnaby North-Seymour, Liberal incumbent Terry Beech thwarted an attempted political comeback by New Democrat Svend Robinson. The riding includes the terminus of the Trans Mountain pipeline, and while Beech voted against the expansion, his government's purchase of the project was considered a political liability for him.

Jody Wilson-Raybould, the former Liberal attorney general who was booted from caucus amid the SNC-Lavalin scandal, won a nail-biter contest to keep Vancouver Granville as an Independent.

Vancouver Island, which had been poised to be a battle between the NDP and Greens, remained overwhelmingly orange. Green Leader Elizabeth May was re-elected in Saanich-Gulf Islands and Paul Manly won in Nanaimo-Ladysmith, but the New Democrats hung on to all the other ridings.

NDP Leader Jagmeet Singh handily won Burnaby South in a byelection earlier this year and held the seat on Monday.

In the Interior, the Conservatives recaptured seats they held going into the election and took Kelowna-Lake Country from the Liberals. Former provincial cabinet minister Terry Lake was a star candidate for Trudeau's party in Kamloops-Thompson-Cariboo, but Tory incumbent Cathy McLeod was re-elected.

Popular New Democrat Nathan Cullen chose not to run again in his northwest riding of Skeena-Bulkley Valley, but the party's strong base helped candidate Taylor Bachrach take the seat. Northeast B.C., home to shale gas fields, typically skews Conservative and that did not change on Monday.

"This province has always been deeply divided, much more so than other jurisdictions in the country," said Cameron.

The Conservatives were able to tap into their resource-economy base in the northeast and Interior, while there are parts of the Lower Mainland that lean socially conservative, such as Abbotsford, he noted.

Gerald Baier, an associate professor of political science at UBC, said even if the Liberals had hung onto the five seats they lost to the Tories in B.C., they still would not have a majority government.

"At the end of the night, (the Liberals) could still be happy that they remain competitive in the province, especially given how close the polls were going in," he said.

Climate change, including the Trans Mountain pipeline project, was expected to be a defining issue in Metro Vancouver and Vancouver Island. The pipeline runs from the Edmonton area to Burnaby and the expansion would triple its capacity to carry diluted bitumen and increase tanker traffic seven-fold off the coast of B.C.

The NDP and Greens targeted voters disappointed with the Liberals' purchase of the pipeline for $4.5 billion.

The Greens must be disappointed they were unable to break through on Vancouver Island, Baier said, adding they still have not figured out a way to win traditional NDP ridings.

Singh's New Democrats began the campaign with low poll numbers and poor fundraising but appeared to enjoy a surge in popularity during the final weeks. However, that didn't translate into any gains for the party in B.C.

"It was a surge to get back to the surface. They had to get back to where they were in 2015," said Baier. "I think it's partly the doldrums the party went into the campaign with."

All four major party leaders spent the final day of the campaign in B.C., suggesting they expected the province to be a crucial battleground.

The parties also made competing housing promises in an effort to capture Vancouver-area voters frustrated by high prices and low vacancy rates.

This report by The Canadian Press was first published Oct. 21, 2019.