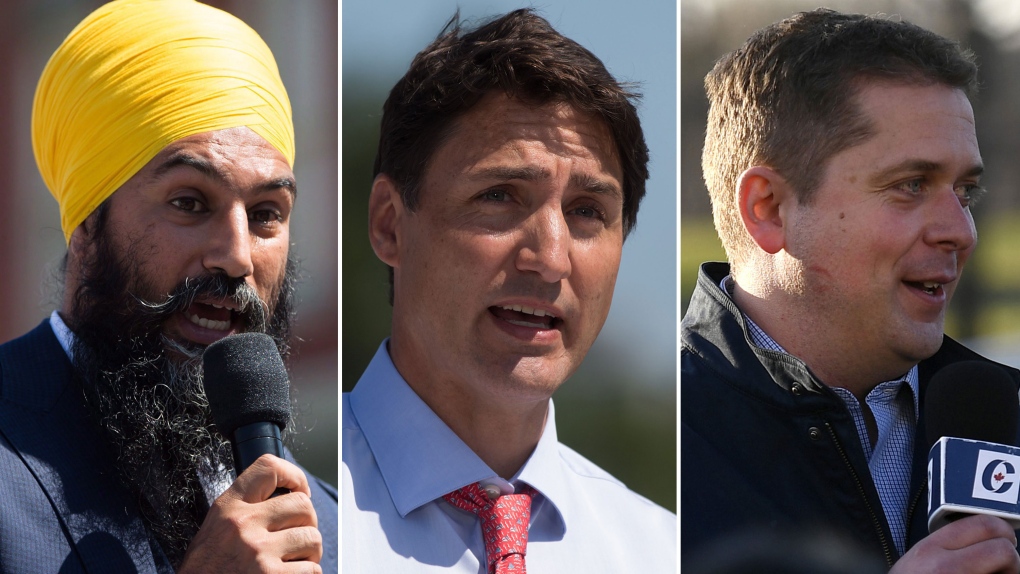 TORONTO -- With just a few days to go until the 2019 federal election, federal party leaders are nearing the end of their cross-country campaign.

With that in mind, CTVNews.ca dug into where exactly the Liberal, Conservative and NDP leaders have focused their attention with campaign stops and analyzed what regions they’ve prioritized.

According to the analysis, the three leaders have visited a total of 208 communities as of Wednesday -- sometimes for no more than a photo op -- with a strong focus on the pivotal provinces of Ontario, Quebec and British Columbia. These three provinces are often referred to as "battlegrounds," or "vote-rich" because they represent the three provinces with the most seats available, accounting for 71 per cent of the House of Commons. Combined, they’ve hosted nearly 83 per cent of all campaign stops by the three leaders.

Liberal Leader Justin Trudeau has been the busiest of the leaders, with 78 campaign stops thus far in the campaign.  He has stopped 36 times in Ontario, 17 times in Quebec and nine times in British Columbia.

Of note, Trudeau kicked off his campaign in Vancouver and has made two stops each in Surrey and Burnaby -- ridings he won in 2015 but could lose this time around. The Liberals have traditionally not been strong in B.C., but Trudeau turned that around with 17 seats in 2015.  Experts expect a tight race in the province, with Trudeau’s purchase of the Trans Mountain Pipeline and his handling of Vancouver-Granville candidate Jody Wilson-Raybould during the SNC-Lavalin scandal emerging as contentious issues among voters in the province.

Conservative Leader Andrew Scheer has made 71 campaign stops the election began on Sept. 11. He’s made 31 visits in Ontario, 15 in Quebec and nine in B.C..

Scheer appears confident in support in the Prairies, where he’s made just five stops thus far. On the other hand, Scheer could be poised to gain some ground in Atlantic Canada, which went completely red in 2015, but has elected two Progressive Conservative premiers in the past 13 months.

With a smaller budget compared to the Liberals and Conservatives, NDP Leader Jagmeet Singh has chosen to focus his campaignon and spend more time in some more centralized areas. Of the 59 campaign stops he’s made thus far, Singh has visited Ontario 25 times, B.C. 20 times and Quebec 10 times.

You can isolate each party by using the map legend to apply a filter. Or click here to see full screen version of map

While Scheer and Trudeau have campaigned in each province, Singh has not made a stop in P.E.I, Newfoundland and Labrador or Alberta, and he’s made just one stop ineach of Saskatchewan, Manitoba, Nova Scotia and New Brunswick.

Trudeau is the only one of the three leaders to have made a stop in the territories, when he travelled to Iqaluit for a climate announcement on Oct. 8.

Despite Alberta being home to the fourth-most seats in the House of Commons, none of the three leaders have made it a priority to visit. This is likely due to the fact that all but five of Alberta’s 34 ridings went Conservative in 2015 and it’s expected to be much of the same this time around.

The latest Nanos research in each province suggests the three provinces could provide a swing in this election. Polling released earlier this week for Ontario and Quebec suggests the Liberals hold a lead in both provinces, but most of that support comes in the Greater Toronto Area and Montreal

When looking outside of the GTA, the Liberals and Conservatives are separated by just 0.1 percentage points, with the NDP just over 10 percentage points behind. When excluding Montreal, pollster Nik Nanos said earlier this week that Quebec is essentially a “three-way race” between the Liberals, Bloc Quebecois and Conservatives, all of whom sit between 28.5 and 24 per cent support.

In B.C., polling from before the election suggested strong support for the Liberals, with the Conservatives 10 percentage points behind, though the NDP and Green Party are also expected to snag some seats in the province.

Overall, nationwide polling suggests the Liberals and Conservatives are separated by a single percentage point, while the NDP have seen a significant rise in the past week and now sit 14 percentage points back of the lead. More than 10 per cent of voters remain undecided, however.

If you want to read up more on certain areas, or types of ridings, you should check out the series of riding profiles we've published:

And, if you're curious to dig further into what each leader has been promising while making these stops, check out our interactive platform tool.