Trend Line: Race for the top 'can't get much closer than this' 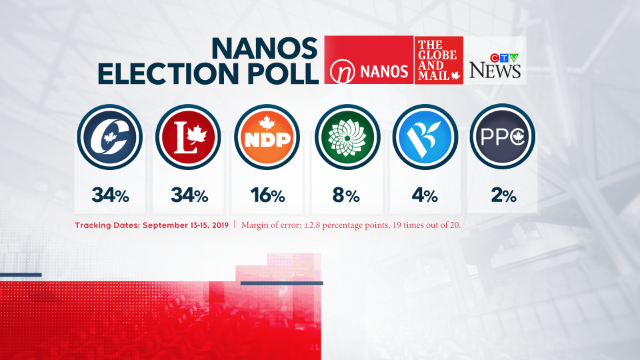 You can subscribe to Trend Line on Apple Podcasts, Google Podcasts, Stitcher, iHeart Radio and Spotify.

The Conservatives and Liberals are in a statistical tie for the lead in the latest daily tracking numbers released by Nanos Research.

Monday's numbers put the Conservatives at 34.4 per cent ballot support with the Liberals trailing slightly behind at 34.0. The NDP came in at 16.4, the Green Party at 7.8, the Bloc Quebecois at 4.4 and the People's Party of Canada at 2.3.

"I don't think it can get closer than this," said Nik Nanos, chairman of Nanos Research. "It's like a knife fight in a telephone booth."

Listen to the latest episode of the Trend Line podcast to hear Nanos and co-host Michael Stittle discuss more on where the slight shift in support for the Conservatives may be coming from.