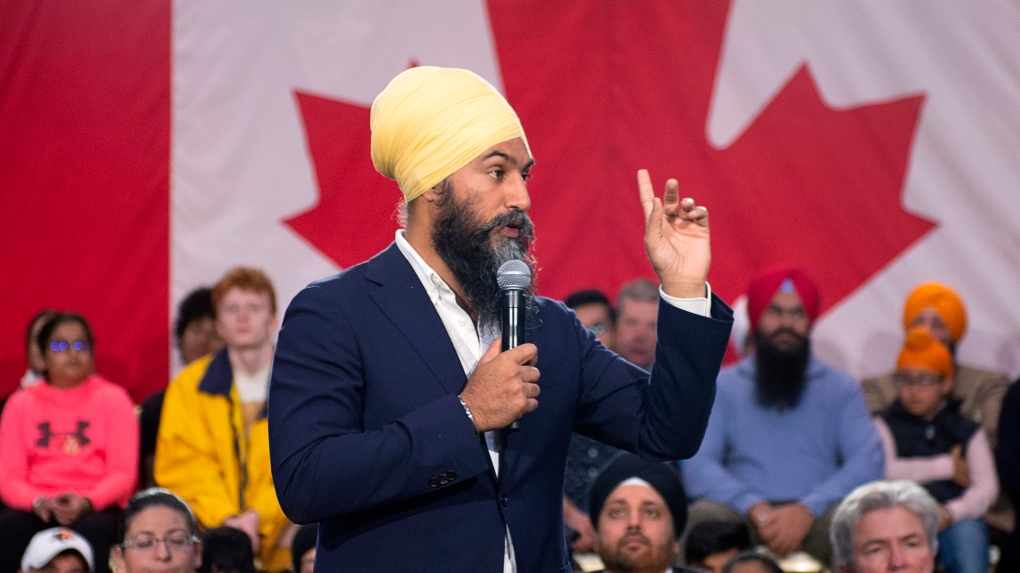 VANCOUVER -- As support for the Green Party inches closer to taking third place from away the NDP in the polls, Jagmeet Singh is turning his attention to voter cynicism.

“I want to fight that cynicism with hope,” Singh told the crowd at a town hall in Surrey, B.C. on Sunday.

“Cynicism is going to have an impact, I think, in this election,” he said. “People have seen Mr. Trudeau with pretty words and empty promises and it’s going to discourage a lot of people and it has discouraged people.”

Since Nanos Research’s daily polling began on Sept. 14, support for the NDP has dropped from 16 per cent to 13 per cent. Singh’s status as preferred prime minister, according to the polling agency, has gone up by 1 per cent to 10.9 per cent.

Meanwhile support for the Green Party, arguably the biggest competition for the NDP, has grown to 12.6 per cent.

On Monday’s edition of CTV’s Trend Line podcast, pollster Nik Nanos took note of the Green surge and said Elizabeth May’s party is now neck-and-neck with the NDP for third place – just as Singh and May are in a statistical tie for preferred prime minister.

“You’ve got an interesting race there,” he said.

When CTV News asked Singh his thoughts on why his party wasn’t performing better in the polls -- despite what he has said is growing momentum nationally -- Singh expressed doubt in the ability of national polls to capture the full picture.

“I don’t think the national polls are connected to what we are seeing on the ground,” he said. “We are seeing a lot of people coming out and being excited and inspired because they are seeing themselves reflected in our campaign. Our campaign is one that speaks directly to what people are going through.”

Attendance at the leader’s town halls have been on the rise, with the largest crowds seen in British Columbia and Windsor, Ont. While town hall events in Surrey-Newton and Victoria hovered around 500 attendees, a number of other whistle-stops throughout the campaign have drawn much smaller crowds of just two or three dozen supporters.

“With the Greens there is a really clear distinction: Mrs. May has made it clear she would support Mr. Scheer. She would support the Conservatives and put them into government,” Singh said in response to a question about his party’s spot in the polls. “I wouldn’t do that. I don’t believe we can negotiate with someone who doesn’t believe in the values we have.”

While party insiders acknowledge Singh’s response to the blackface controversy helped raise his profile and get people listening to his message, whether that increased awareness will translate into support in the polls and ultimately more votes remains to be seen.