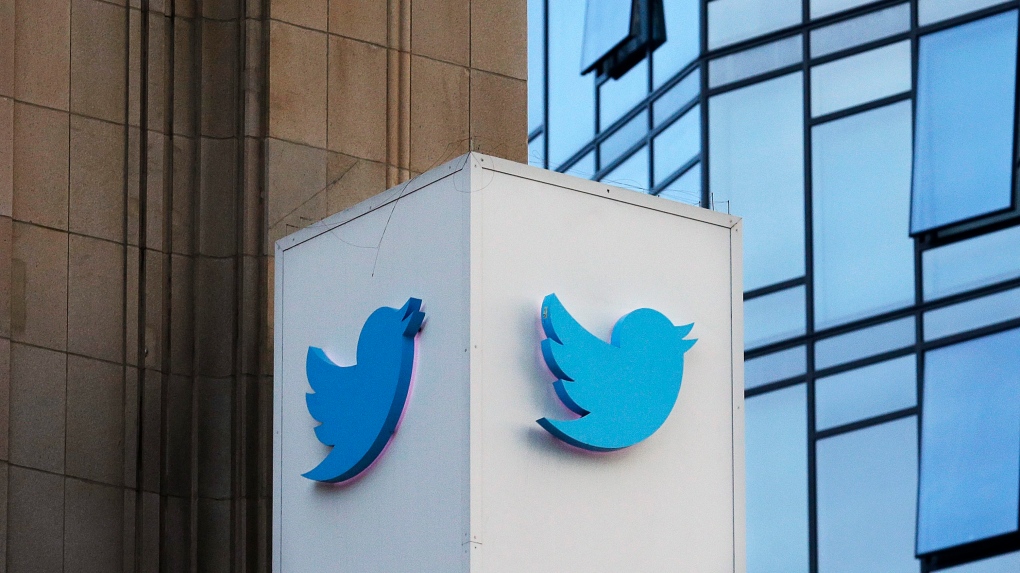 This Oct. 26, 2016 file photo shows a Twitter sign outside of the company's headquarters in San Francisco. (AP Photo/Jeff Chiu, File)

OTTAWA -- Twitter is giving the all-clear so far for the federal election campaign, saying it has not yet uncovered any instances of large-scale attempts at disinformation or manipulation.

Despite vigorous activity on the social-media site related to the Canadian campaign, including "politically polarizing" conversations on an international scale, the company has seen "absolutely no sign that those activities represent a co-ordinated, malicious event -- or foreign interference," said Yoel Roth, Twitter's head of site integrity, in an interview.

Twitter has made changes to its elections integrity and disinformation-spotting policies both as part of its own programs and to comply with Canada's election laws.

Roth said the company has invested in identifying large-scale manipulation attempts -- of the type that roiled the 2016 presidential election in the United States -- and its focus during this election campaign is not always on the content of tweets themselves but also the means by which that content is spread.

When Twitter spots behaviour like widespread bot campaigns, with automated accounts following each other and posting and re-posting similar material over and over again, "we don't even need to look at exactly what content they're sharing," Roth said.

When it comes to content, though, Twitter explicitly does not police political debate or misleading statements about parties or candidates, focusing instead on false information on voting -- when, where and how to cast a ballot.

That means "inaccurate statements about an elected official, candidate, or political party" are not a violation of Twitter's policies. But "misleading claims about long lines or equipment problems at voting locations," for example, are.

Reporting from parties and users is essential to identifying Tweets that violate policies against misleading information, voter suppression or pretending to be someone you're not, Roth emphasized.

Roth said Twitter's attitude is to "err on the side of protecting everyone on Twitter," and the company will remove content regardless of whether the misinformation was posted maliciously.

Another major part of Twitter's elections-integrity efforts ahead of the campaign was the creation of its online "Ads Transparency Center," a registry of political advertisements on the site.

During discussion of Bill C-76, which aimed to update Canada's election laws and deal with social media's influence on campaigns, Twitter executives said re-jigging its existing ad registration system to fit with the requirements of the legislation would be a major undertaking, but eventually decided to comply. It opted to prohibit political ads during the official pre-election period in Canada, between June 30 and the start of the campaign Sept. 11.

Michele Austin, Twitter Canada's head of government and public policy, said the ad registry was certainly an effort to adapt to the demands of the legislation, but also that it was worthwhile doing in itself.

The registry currently shows several political advertisers, including the Liberals and Conservatives, who have had to go through a registration process in which Twitter cross-references the identities of potential advertisers with party, candidate and third-party group lists maintained by Elections Canada.

"Verifying your identity is very important to us," Austin said.

One concern is that advertisers might slip through the cracks, promoting political content through paid advertising without being properly certified or flagging the tweets with the necessary disclosures.

"The intent is to stop you before you promote your tweet," Austin said. "No system is perfect, but we're working very hard to make sure the ads policy and the ads-policy review team is keeping a very close eye on the platform."

Roth and Austin both emphasized the importance of communicating with the Canadian government, parties and security agencies throughout the campaign, and with other tech companies whose platforms host political content.

"Elections security is a collective security challenge, and if one platform is doing well but the rest of the Internet isn't, that isn't success for anybody."