What data do political parties have on you? We called all the federal parties to find out 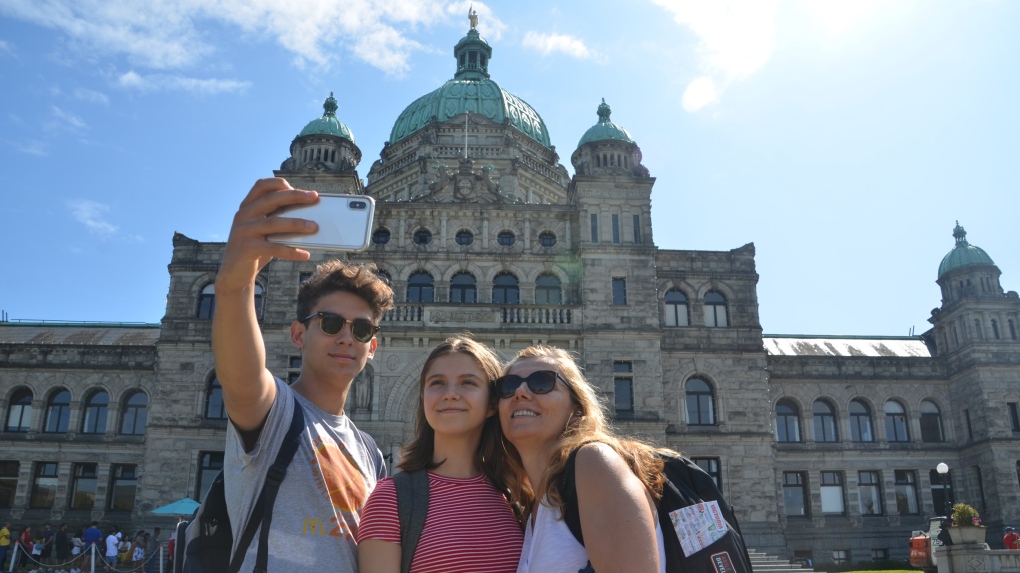 A family visiting from Vancouver poses for a selfie on the lawn of B.C.’s parliament buildings in Victoria. (Credit: Francesca Fionda)

VANCOUVER -- Political parties in Canada are collecting all kinds of personal information on voters, and there is no way to tell exactly what data they have on us, where they got it from and what they plan to do with it.

“At the federal level at least, it seems to be pretty much open season on Canadians,” says Teresa Scassa, the Canada Research Chair in Information Law and Policy at the University of Ottawa.

Federal privacy laws apply to private-sector organizations and government institutions, giving people a right to access their personal information. But political parties are exempt from those laws.

Attention Control put the political parties to the test to see if they would respond to questions about what data they had on registered voters, regardless of the law. To do that, I called each party’s general line to see if the staff who answered would respond to my request for personal information.

Most of the federal parties told me they had my name and address, which is available to all parties through Elections Canada. The Liberals and NDP also told me how many times a canvasser came to my address. The Bloc Quebecois did not respond to phone calls or emails and the People’s Party said they had no information at all. None of the parties did anything to verify my identity and ensure it was actually me asking for my own information.

But insiders, academics and privacy experts say parties are collecting much more than our names and addresses.

“They certainly have the right to collect all sorts of information that goes well beyond what is in the voter registry,” says Scassa. She says data is also collected when campaigners go door to door and from social media to develop profiles on voters.

B.C. is the only province where privacy laws extend to political parties, but does it cover federal parties too?

McEvoy’s investigation found that parties were collecting much more information than voters might be aware of, such as their gender or ethnicity, often based on nothing more than appearance or names.

“In particular, parties were taking the emails and contact information of individuals and uploading them to Facebook for a couple of reasons. One was to directly advertise to people on their news feeds, but even more, in our view, inappropriately, they were using it to make those individuals a subject of data analysis,” says McEvoy.

When Attention Control filed requests to provincial parties in B.C., we received some information beyond names and addresses. The B.C. NDP also shared three equations that calculated how likely I was to support them, how persuadable I might be and how likely I am to vote. They said this was based on personal information they had collected, generalized voter turnout, the demographic and census data of where I am registered to vote and “anonymous voter preference models”.

Bryan Short is with the B.C. Freedom of Information and Privacy Association. He says being able to request your own data, check for accuracy and make any complaints if you feel an organization is collecting too much data on you is important for our democracy.

“We in B.C. and across Canada we have information rights and if we don't choose to exercise those rights then we'll never know how we might be influenced through these election campaigns,” he said.

Recently, a decision was made by McEvoy’s office that found that federal organizations operating in B.C. must comply with the province’s privacy laws. The decision stemmed from a complaint against the NDP Courtenay-Alberni riding association.

Scassa says if the decision stands it will mean that “riding associations in B.C. are going to be held to a much higher standard of data protection than anywhere else in the country.”

Federal political parties are not required by law to report privacy breaches or tell Canadians what data they have, but they are required to publish their privacy policies. But those privacy policies recently got failing grades when it came to basic practices from the internet advocacy group, OpenMedia.

None of the major political parties are following basic best practices when it came to things like transparency on how our data is used, consent and access, says campaigner Victoria Henry.

“The most important thing is that the kind of information that political parties hold on people is particularly sensitive. There are many people who are really, really happy to tell everyone how they vote and who they support,” she says. “A really crucial part is being able to keep that information private if you so wish. And that kind of information that parties can be gathering could be things like your voting intention, your donation history, and all kinds of other things that some people are going to consider really, really private.”

So far only the Green Party has released detailed information addressing privacy issues in their platform. They say they would require political parties to follow the privacy act and would also require companies to give people “the right to be forgotten” meaning you could ask a company to delete all the personal information they have on you from their databases.

Here’s how you can request your data from government bodies and companies: