What's in a slogan? Expert insight on Liberal, Conservative, and NDP ads 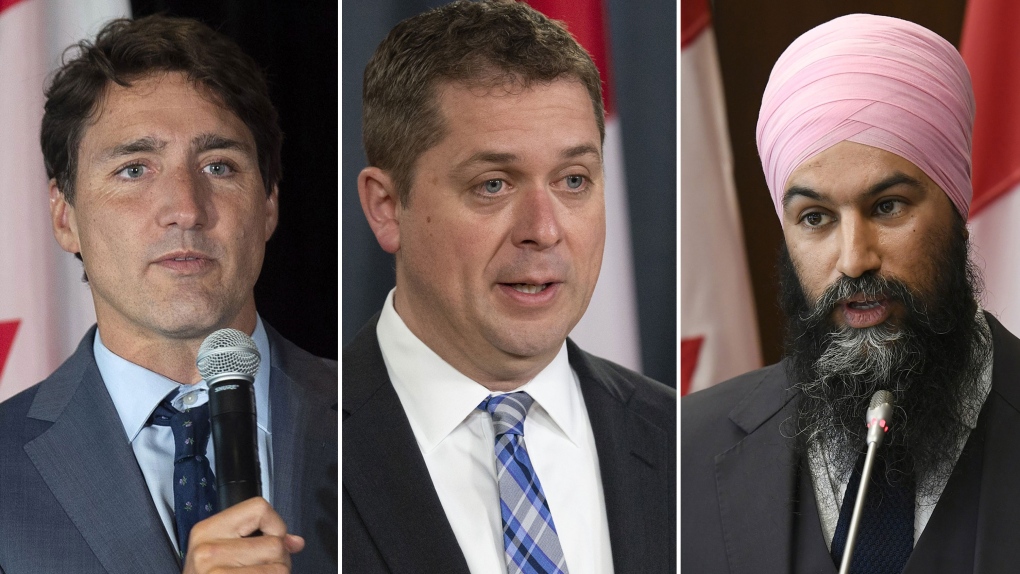 Prime Minister Justin Trudeau is set to officially launch the federal election campaign within days. Now that each of the three main parties have unveiled their main messages to voters alongside television advertisements, CTVNews.ca looked at each ad, and party slogan to get a sense of what the early strategies are for each campaign.

Generally, campaign slogans are a "skeleton" around which each party can build their messaging, said strategic communications consultant Greg Weston on CTV's Power Play earlier this week.

On the same panel, Conservative strategist Kate Harrison and NDP strategist Karl Belanger agreed that while slogans don’t matter as much as some think, they are a way to create a certain impression and are often heavily tested in focus groups before being released.

While all three of these either focus on "you" or the idea of movement, or change, the other similarity is that they are negative in what is inferred, rather than overtly attack ads.

After assessing all three ads, Veroni said that Canadians aren't offered massively different messages from the three main political parties, despite the considerable differences in their politics.

"I think all of them are saying we’re with ordinary Canadians, we’re with the great middle class and ordinary Canadians and everyday working people," Veroni said. "At some point they have to break out of that and someone has to stand apart with a more distinctive image, but I'm not holding my breath on that."

As for the smaller parties looking to break through on Oct. 21, the Green party is campaigning on the slogan: "Not Left. Not Right. Forward Together," and the People's Party of Canada is going with "Strong and free."

Of course, there is much more to each campaign's branding. The parties are also running different videos and pushing other messages on social media.

The first Liberal campaign ad begins with Leader Justin Trudeau, with sleeves rolled standing on a moving bus in his Papineau, Que. riding, talking about why he got into politics. He then is shown engaging with constituents in a coffee shop, outdoors, and around a kitchen table speaking with a woman with a baby in her arms.

In the ad Trudeau sets up the difference between what the government has done and what "Conservative politicians" have done or would do. He sets up the Oct. 21 vote as a choice between moving forward or “go back to the politics of the Harper years.”

What a marketing and brand consultant thinks: "It’s a bit heavy-handed in its metaphor of being on the bus… But I think it does have some good qualities. I think it does actually talk about things that the Liberals are obviously going to be focusing on," said Veroni. "It's also very familiar from the previous campaign in the sense of forward momentum… I think they are continuing this visual language of having him in motion."

Veroni said to expect to see more of Trudeau on the move.

A Liberal strategist’s take: "Forward is a big thing in the U.S. right now. I think for progressives, if you're pitching to progressives, you're reminding them that Canada, if you're again, a progressive is better in a lot of ways. We don't want to go backwards," said Greg MacEachern on CTV's Power Play on Sept. 3.

Conservative party and Andrew Scheer: "It's time for you to get ahead"

Conservative Leader Andrew Scheer in the campaign ad unveiling 'It's time for you to get ahead.'

The Conservative's ad, which ends with the unveiling of its main positive slogan: "It's time for you to get ahead," features Leader Andrew Scheer speaking about his affordability plan for Canadians.

Seated in front of a brightly-lit window with nothing but green trees in view, the ad begins with Scheer's name and title on the screen. He goes on to say that he has a plan to lower the cost of living, and says he thinks Canadians are frustrated because "they're working so hard and they're following all the rules, but they feel like they're falling further and further behind." It closes with the slogan logo on screen, with "you" in a lighter blue cursive font.

What a marketing and brand consultant thinks: "There's nothing particularly memorable, and there's nothing particularly attention-grabbing about the ad. So you know, it's kind of the advertising equivalent of wallpaper, which is having seen it, you probably won't remember very much about it," Veroni said. "It's very low key… To me it seems off that that's how they've introduced him to Canadians in this very remote, static, isolated way."

Veroni said that while consistent with the Conservative message, this ad is less of an introduction of Scheer to Canadians than other leaders have opted for in the first pre-election summer ads in the past.

A Conservative strategist's take: "I think what the Conservatives and the NDP have done well is say, indirectly, those guys the Liberals aren't for you. And we are thinking of you first," said Kate Harrison on CTV’s Power Play on Sept. 3.

New Democratic Party and Jagmeet Singh: "In it for you" and "We fight for you"

NDP Leader Jagmeet Singh in campaign ad unveiling 'In it for you'.

The NDP have unveiled a pair of ads with similar, but different messages to English Canada and Quebecers. In English, Leader Jagmeet Singh talks about how he is different from the other leaders, and states what the NDP will do to help average Canadians. The commercial begins with Singh greeting a factory worker, a barista in a coffee shop and then a health-care professional. The slogan appears on screen at the end of the ad, with "for you" in italics, as Singh plays soccer with a group of kids.

In the French-language ad Singh begins by visually setting himself up as different from the other leaders, showing him staring ahead, without his turban, saying that, like Quebecers, he is proud of his identity. He then is shown wrapping his hands before entering a boxing ring, as well as walking, cycling, and marching in the Montreal Pride parade as he discusses the NDP's policies.

What a marketing and brand consultant thinks: "I thought that the French ad was much better than the English for a couple of reasons… One of the things that [the NDP] have to do is really arrest people's attention and that ad in French does that in spades," said Veroni. "I'm ready to fight for you is a much more powerful idea, then simply we're in it for you. I don't know why they softened that phrase in English, because I think the idea of fighting and standing up for people who can't fight for themselves is part of the NDP brand, and would actually make a terrific ad in English."

Veroni said that now is the time for the NDP to take risks with their messaging, to try to regain ground.

An NDP strategist's take: "They show Jagmeet Singh establishing a contrast with the other party leaders, so they need to put some money behind it so people can see [the ads]… The fact that they are taking head-on the issue of the turban and religious symbols, I think had to be done," said Karl Belanger in an interview with CTV National News.